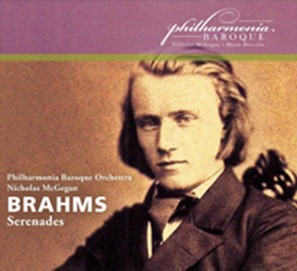 With a discography containing performances conducted by such baton-wielding luminaries as Sir Adrian Boult, István Kertész, Sir Charles Mackerras, and Kurt Masur, Johannes Brahms’s beautiful but seldom-heard Serenades have been fortunate on records.  Perhaps this good fortune can be attributed at least in part to the curiosity which naturally extends to lesser-known works of great composers.  Sadly, this curiosity leads to disappointment in many cases, as the attentive listener finds that oblivion is merited.  That emphatically is not true of Brahms’s Serenades, which are works of considerable accomplishment that reveal their composer on superb form.  There is evidence in both Serenades of the combination of majesty and wistfulness that is unique to Brahms, and a listener expecting ‘Brahms in miniature’ will be surprised by these pieces.  The Serenades also are not studies in symphonic form, of which Brahms was a celebrated master: harkening back to the sterling examples of Mozart’s Serenades, these are works that are remarkably well-crafted, significant products of a master composer in the ascendant.  Given a recording of great sound quality despite ‘live’ recording conditions—solely in terms of avoidance of noises off, this disc is an incredible achievement—by the Philharmonia Baroque Orchestra’s house label, this is a very important contribution to the Brahms catalogue.

Perhaps surprisingly, this is not the first recording of the Brahms Serenades to employ ‘period’ instruments: Capella Augustina recorded the Serenades several years ago with Andreas Spering conducting.  That was an admirable performance, but the present recording is superior in every way, not least in the immediacy of the sound.  Church sanctuaries can be tremendously difficult recording venues, but every challenge is met and conquered in this recording.  The Philharmonia Baroque are renowned among lovers of Baroque music for their en masse virtuosity and the refined elegance of their ensemble playing.  Under Nicholas McGegan’s direction, the orchestra have thrilled audiences throughout the world and have made fantastic recordings, especially of Händel repertory, featuring some of America’s finest singers, perhaps most memorably the late mezzo-soprano Lorraine Hunt Lieberson, an impeccable artist whose recorded legacy would likely otherwise be much less.  Not unlike Andreas Spering and Marc Minkowski, Maestro McGegan has taken his orchestra into later repertory than is common territory for ‘period’ instrument bands.  There are ample precedents for this in the concert hall, as well as on records, where there are enjoyable ‘period’ performances of Donizetti’s Lucia di Lammermoor (conducted by Sir Charles Mackerras), Verdi’s Falstaff (conducted by Sir John Eliot Gardiner), and even Wagner’s Der Fliegende Holländer (conducted by Bruno Weil), but in the music of Brahms one expects the bigger-boned sounds of a Berliner Philharmoniker or Gewandhausorchester.  The players of the Philharmonia Baroque offer evidence on this recording that ‘period’ instruments are in no way inhibited in terms of tonal amplitude and beauty.  These are, in fact, exceptionally beautifully-played performances, particularly in the most grandiose moments of both Serenades, when the honed ensemble playing of the orchestra is on full display.  Every section of the orchestra plays fantastically, but words of special praise are due to the woodwind players, who produce consistently beguiling sounds.

As in many of Brahms’s best works, there are moments of whimsy among the deeper sentiments in the Serenades, and Maestro McGegan succeeds in bringing an appropriate sparkle to these moments.  Brisk tempi are taken quickly, as is generally the case in period-appropriate performances of earlier repertory, in which it is presumed that tempi were generally faster than became traditional—which is not necessarily to say pedantic—after the development of the modern, mechanical metronome in 1814, and this highlights the humor in the high-spirited movements of the Serenades.  It is in the slower movements, however, that Maestro McGegan’s conducting is most revelatory.  Much has been written on the supposition that composers of the Baroque and Classical eras did not intend for slow tempo markings—those like adagio, grave, and largo—to be played in the dirge-like manners that became accepted practice in the 19th and early 20th Centuries, as orchestras grew in size.  A veritable host of factors contributed to this shift in interpretation of tempo markings: larger concert venues inevitably produced vastly different acoustics from those familiar to composers of earlier generations, there was a gradually increased use of metal strings, metal flutes supplanted the softer wooden instruments, and so on.  Arguably, one of the most significant sources for a re-evaluation of tempi was the decreased articulation of tone possible in the broader acoustics of larger opera houses and concert halls, resulting in slower tempi that allowed greater shaping of tone in expanded soundspaces.  The most insightful conductors of modern ‘period’ instrument ensembles have shown that phrasing is the most important consideration in filling a space with sound, however, and Maestro McGegan’s performances have confirmed that he is among these finest conductors with specialties in period-appropriate practice.  A truly arresting aspect of this recording is the way in which an attention to proper tempi and tonal blending born of intimate work with the music of Händel brings to Brahms’s Serenades performances that make the pieces sound new and, most significantly, larger rather than smaller than a listener might have thought them to be.  Maestro McGegan presides over performances that dispel any notions that the Serenades are mere curiosities: these pieces are vintage Brahms and are played as such.

Brahms was branded a traditionalist because of his strict adherence to the musical forms that he inherited from his cultural ancestors.  Utilizing techniques like sonata form, he was to many musical minds of the 19th Century the anti-Wagner.  It is apparent from his music that Brahms found convention liberating, though: freed from the necessity of trailblazing, he applied his imagination to musical development within his chosen forms.  The Serenades are not groundbreaking pieces, but they are exciting, beautiful pieces that nod to the past of Haydn and Mozart and anticipate the rise of Mahler on a distant horizon.  Nicholas McGegan and the Philharmonia Baroque Orchestra gave performances of the Serenades that crackle with the excitement of great music of any era and that genuinely deserved to be recorded for posterity.  Of how many performances—of any orchestral repertory—during the past thirty years can that honestly be said?
© by Joseph Newsome