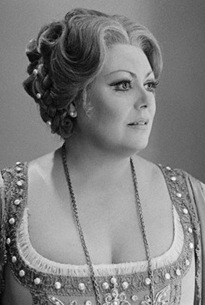 From the fertile land of Wales that reared Sir Geraint Evans and Dame Gwyneth Jones grew one of the most arrestingly beautiful voices ever heard in the music of Mozart, Schubert, and Richard Strauss; that of Dame Margaret Price, whose passing on 28 January not only silenced a glorious voice but also extinguished a warm, unpretentious spirit.

Born in Blackwood, Wales, Ms. Price endured a childhood malady of her legs that caused her pain throughout her life, and she often took on the care of her handicapped brother.  It is impossible to know the extent to which music was a comfort to Ms. Price during the difficult earliest years of her life, but her formal studies of music were begun before her sixteenth birthday, and she became a member of the famed Ambrosian Singers during her time at the Trinity College of Music.

Initially trained as a mezzo-soprano, Ms. Price made her formal operatic début as Cherubino in Mozart’s Le Nozze di Figaro at Welsh National Opera in 1962.  Her career at the Royal Opera House, Covent Garden, where her progress was impeded by Sir Georg Solti’s reluctance to entrust leading roles to Ms. Price, was solidified by another performance as Cherubino, one in which she substituted on short notice for the celebrated Spanish mezzo-soprano Teresa Berganza.

Following her success at Covent Garden, Ms. Price established herself in Germany, where she formed an artistic partnership with Otto Klemperer that led to her first leading role in an opera recording, Fiordiligi in Così fan tutte.  Mozart roles remained central to Ms. Price’s repertory throughout her career.  She eventually recorded a poised, ethereally beautiful Contessa in Le Nozze di Figaro for Riccardo Muti and a sterling Pamina in Die Zauberflöte for Sir Colin Davis, along with a refreshingly dignified Donna Anna in Don Giovanni for Sir Georg Solti—for whom, ironically, she made several superb recordings.  On records, Ms. Price also proved an exceptionally touching exponent of the role of Wagner’s Isolde, recorded for Carlos Kleiber but never sung in the theatre.  Equally remarkable was her singing on several recordings of music by Händel, especially a sublime performance of Saul conducted by Sir Charles Mackerras.  It might be argued by purists that Ms. Price’s voice was not an ideal instrument for the music of Händel, but by which period-specialist soprano have the vocal lines of the Saxon master been more exquisitely sung?

Despite an operatic career that took her to the Metropolitan Opera, where she débuted as Verdi’s Desdemona on 21 January 1985, La Scala, and the Wiener Staatsoper, it was in Lieder repertory that Ms. Price’s voice perhaps shone most resplendently.  In the Lieder of Brahms, Schubert, and Richard Strauss, the tonal beauty and emotional sincerity in Ms. Price’s performances proved irresistible, both in recital halls and on records.  None of Ms. Price’s Lieder recordings displays her voice more fittingly or impressively than her account of Schubert’s ‘Der Hirt auf dem Felsen.’  Easily meeting the demands of the song’s difficult, two-octave tessitura, from a resonant lower register to a ringing, unforced top B that would be an uncommon blessing in many performances of Fidelio, Ms. Price renders every nuance of the turbulent text with understated brilliance.

Possessing a voice that was a full, centered lyric soprano, Dame Margaret Price was an artist whose commitment to technically-secure, meaningful music-making rivaled the standards set by legendary sopranos of the past: Maria Müller, Dame Elisabeth Schwarzkopf, and Lisa della Casa, for instance.  She was among the greatest artists of her generation, and her voice will surely reveal to future generations the dignity of Mozart heroines who smile through tears and the inner peace that supports the soaring melodies of Richard Strauss.