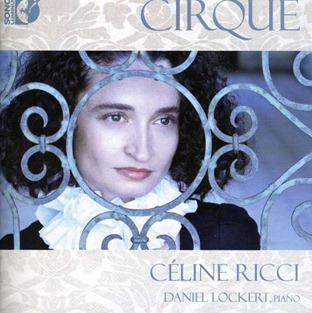 Comparing the vocal recital discs released during the first eleven years of the new millennium with those that shaped the course of the first century of sound recording is a largely dispiriting undertaking.  It would be easy to suggest that the proportion of recital discs with artistic rather than commercial goals has decreased or that the goals of recital discs and those who plan and create them have changed as the dynamics and demographics of audiences receptive to such discs have evolved, and indeed compelling support for these arguments could be produced without difficulty.  To apply a less complex analysis to the situation, it might said that the joy has gone out of recording recital discs.  When one hears recordings of art songs by Adelina Patti, of Brahms Lieder by Elisabeth Schumann, or—more recently—of overlooked Verdi songs by Dame Margaret Price, it is impossible to imagine these artists as commercially-minded businesspeople with one eye on the till.  These recitals were evocations of the qualities that made the singing of these artists memorable and also valuable souvenirs of their personalities as both performers and individuals.  Except in some few rare cases, it is this essence, the intangible but always audible sense of the mirth of singing, that is missing from vocal recital discs now.  Delightfully, Cirque, this recital of Twentieth-Century French mélodies by soprano Céline Ricci and pianist Daniel Lockert, is one of those exceptions, a remarkable recital in which the experience of performing the music included on the disc is approached with the same direct, uncomplicated delight that might accompany one’s walk along the Seine in the early morning, turned out of a café at the closing hour, the last chill of night clinging to the river, and the smell of baking bread spilling into the streets.

A few words of caution are necessary when approaching this disc.  Listeners wanting or expecting the safe, uninflected singing and cautious, easily-ignored playing heard on so many recent recital discs will be disappointed or surprised in turn.  The singing offered in this performance by Céline Ricci, an exciting French soprano now resident in San Francisco, is authoritative without being stilted or inaccessible for the casual listener.  One lesson learned from recent recital discs is that a Francophone name on the cover does not ensure the elegant phrasing and placement of vowels expected in the heady days of Régine Crespin, Michel Sénéchal, and Gérard Souzay.  In the case of Ms. Ricci, however, the art of French singing as exemplified by the great French-speaking artists of the past, including the inimitable Edith Piaf, not only survives but thrives.  In her singing of each song on this disc, Ms. Ricci displays the instinctive marriage of music to text that is crucial to the effective singing of French mélodies.  Especially impressive is her mastery of the incredibly difficult—even for native speakers of French—application of nasalization as a function of inflection rather than mere pronunciation, a skill that eludes many fine singers but which in Ms. Ricci’s singing sounds disarmingly natural.  Furthermore, Ms. Ricci possesses precisely the sort of forward, bright timbre that unpretentiously reveals the nuances of this music without making of each song a grandiose act of artistic piety.  The Passions of Bach are perhaps meant to be revered: the songs on this disc, gems of their genre though they are, are surely meant to be experienced, to be sung if not actually in the cabaret then with its irrepressible ebullience.  In that regard, Ms. Ricci’s performance is as delightful, intoxicating, and slightly stinging as fine champagne.

The songs and vocal music of Milhaud and Poulenc are hardly unknown, both on recordings and in recital halls.  It is especially welcome to hear the songs offered in this recital (and, outside of France, to hear vocal music by Poulenc that is not associated with nuns en route to the guillotine), however, and the songs of Auric and Sauguet are very welcome, especially in performances as spirited as those offered by Ms. Ricci.  The texts of these songs, composed to verses by poets of the stature of Jean Cocteau (and at this juncture a few words of praise are due to Sono Luminus for the excellent—and sadly atypical—articles in their liner notes about the poets whose words are sung in this recital), are uncommonly fine, equal in linguistic richness and dramatic impact to the Goethe and Heine texts beloved by Teutonic composers.  In a recital that has no misfires, Ms. Ricci’s singing of Auric’s ‘Huit Poémes de Jean Cocteau’ is a superb traversal, both vocally and dramatically, of a sequence of songs that explores the emotional space of a Winterreise with simpler gestures and far more smiles.  In his five-song sequence ‘La Voyante,’ Sauguet proves himself the equal of Poulenc in shaping musical structures around the points made by spiky texts.

Wonderfully pulse-quickening is Daniel Lockert’s account of Erik Satie’s previously-unrecorded ‘Rag-Time Parade,’ a barnstorming piece that will inevitably conjure for American listeners aural memories of the music of Scott Joplin.  Throughout this recital, Mr. Lockert accompanies Ms. Ricci with the symbiosis required to enrich the musical experience.  One danger of this music is that its approachability somehow creates a mirage that suggests that these pieces are easy to play: the unencumbered virtuosity of Mr. Lockert’s playing does not dispel the confusion, his command of the idiom so complete as to make this seem to be music that merely happens rather than having to be rehearsed and performed.  When one is virtually unaware of the diligence and skill deployed in a pianist’s playing, not least in the context of his accompaniment of a vocal recital, one is hearing the work of a first-rate artist.

One need not be a connoisseur of Twentieth-Century French vocal music in order to enjoy this recital.  Admittedly, this is not repertory that one is likely to hear sung by the over-promoted, just-off-the-Tarmac singers whose recitals delight their followers and whose bland recordings win praise in the press.  There is the sense in every note of this recital that this was a very personal journey for Ms. Ricci, one not so much of nationalistic identity but more of individual artistic curiosity and temperament.  This is unquestionably among the finest vocal recital discs of recent years, its novelty and caution-be-damned attitude as thrilling as the firecracker brilliance of Ms. Ricci’s singing.  Most vitally, this disc is simply great fun.