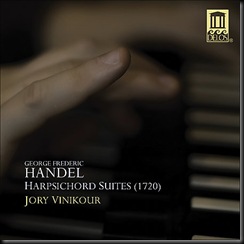 Händel’s 1720 suites for harpsichord have been at the peripheries of the performance and recorded repertories of many of the most celebrated keyboardists of the twentieth century, players as diverse as Glenn Gould and Thurston Dart, who performed the suites on a large variety of instruments ranging from period harpsichords to modern concert grand pianos. In music for the harpsichord, questions of which approaches are and are not properly stylish are not quite so prominent as with Baroque operas: knowing that a composer intended his work for the harpsichord, the construction of the instrument and its quintessential method of tonal production dictate to a certain degree the manner of execution required of the player. Music composed for the harpsichord invariably demands great dexterity, not merely in rapid-paced display pieces but also in slower, more thoughtful pieces (which, in the custom of the Baroque, often adopt dance forms) in which articulation is an important device of interpretation. This is perhaps more true of Händel’s harpsichord music than that of his closest rivals (Johann Sebastian Bach excepted). Händel’s music always displays a ‘public face,’ as it were, but differs from the music of many other Baroque composers in that the fugal complexities and intricate ornaments are not solely sequins sewn onto the garment so that the wearer sparkles in the glare. Even the most extravagant bravura passages serve an emotional purpose. Whatever the context of a performance or recording of Händel’s harpsichord suites, it is upon the player’s realization of this elusive dichotomy that success relies.

An important lesson learned from Baroque opera is that it is no easy task to sort through the technical hurdles of difficult music in order to discern – and, hopefully, convey to the listener – the interpretive significance of the difficulties. It is in this vein that this recording achieves its greatest accomplishments. The consummate master of his chosen instrument (in the case of this recording, a copy of a 1739 Johann Heinrich Gräbner harpsichord constructed in 2001 by John Phillips), Mr. Vinikour’s technical prowess need hardly be mentioned: every requisite element of a great harpsichordist is decidedly and reliably in place. This recording is not merely the work of a great player, however, but likewise of a tremendously gifted artist.

Throughout the performances preserved on these discs, Mr. Vinikour ideally captures the inherent spirit of each movement. Passages of dazzling technical difficulty are rendered with exhilarating ease. Yet, when the cast of the piece reveals to the listener that exhilaration is not the intent, Mr. Vinikour is capable of communicating through the inflections of his playing that the music is difficult, frustratingly and maddeningly so, explosions of anger and temper expressed as deftly as murmurs of joy and tenderness. A popular criticism of Baroque music is that it is academic, formulaic, and emotionally void except in simplistic depictions of single emotions played against one another for basic effects of contrast. Mr. Vinikour’s performances of Händel’s harpsichord suites resoundingly contradict these assertions, however, and prove that these are not ‘miniature masterpieces’ (a term often applied contemptuously) but masterful works on any scale of comparison.

As he displays in all of his performances and recordings, it is obvious from the start that Mr. Vinikour’s extensive experience as an accompanist for the finest instrumentalists and singers, as well as impressive achievements as a chamber musician, has informed his perception of phrasing. Unlike many players in music of this nature, Mr. Vinikour’s playing speaks in musical paragraphs rather than in disjointed clauses. The insightful grasp of the overall structure and both thematic and emotional progressions of a piece enables Mr. Vinikour to punctuate his playing appropriately, never leaving dangling participles of notes that seem pasted on. There is a reason for every note, and Mr. Vinikour’s playing reveals this in a way that never manipulates or imposes on the music, a rare experience in which the player convinces the listener that the expressive nuances of the music fully justify its formidable technical difficulties.

These suites are indisputably special for they represent Händel composing for a solo instrument of which he was an acknowledged master. It is therefore easy to view these suites as remarkably significant works, and it is beyond doubt that they exhibit Händel’s extraordinary ability for challenging the boundaries of the musical idioms he knew so well. Listening to Mr. Vinikour’s performances on these discs, every idiomatic challenge met head-on and won heroically, the essence of Händel’s musical sensibility seems lovingly revealed.  Even amidst the continuing revival of interest in Händel’s music in the world’s concert halls, opera houses, and recording studios, this recording is exceptional in equally confirming the statures of the composer, his music, and the player who has chosen to explore it, and in reminding the Baroque-saturated public that music published in 1720, when entrusted to the right hands, is no less inventive and moving than any music created in the three centuries that have followed.