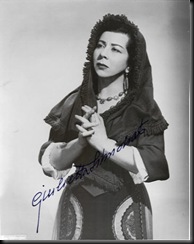 On 12 May 1910, Italy welcomed a child in whose small form slumbered one of the greatest mezzo-soprano voices opera would enjoy in the twentieth century.  Today celebrating her ninety-ninth birthday, Giulietta Simionato enjoyed a tremendously successful career that garnered a deserved legacy as one of the most celebrated and frequently recorded singers of the mid-century.  Admired as a unfailingly musical singer and respected as a fastidious and always prepared colleague, Simionato inherited the mantel of the great Ebe Stignani in Italian dramatic mezzo-soprano roles.  Since Simionato’s retirement, only Fiorenza Cossotto and Dolora Zajick have truly approached the level of Simionato’s achievements.

Simionato maintained a wide repertory that included Rossini roles (Barbiere di Siviglia, Cenerentola, and L’Italiana in Algeri), bel canto heroines (Bellini’s Adalgisa and Leonora in Donizetti’s Favorita), Meyerbeer’s Les Huguenots (albeit sung in Italian), Bizet’s Carmen, and Laura in Ponchielli’s Gioconda, in addition to the dramatic Verdi roles (particularly Amneris and Azucena) upon which her fame was built.

It is as Santuzza in Mascagni’s Cavalleria rusticana that Simionato most impresses me, in several recordings that range from the beginning to near the end of her career.  Perhaps most extraordinary is a 1963 live performance from La Scala in which Simionato was partnered by Franco Corelli.  The emotional intensity of the performance is remarkable, but perhaps more astounding is the fact that there are no compromises in the quality of the music-making.  This performance dates from late in Simionato’s career (she made her début at La Scala in 1936 and retired from operatic performance three years after this Cavalleria, in 1966) but everything that Mascagni requires is in place: complete vocal security across a wide compass, untiring dramatic involvement, and a pervading sense of the tragic lurking within the commonplace.  Simionato is, in fact, the only singer I have heard who fully convinces me of the effectiveness of a mezzo-soprano in what I consider to be decidedly a dramatic soprano role.

Simionato is one of the handful of acknowledged great singers of the twentieth century whose artistry genuinely merited the distinction.  On a personal note, Simionato is one of my favorite singers, to whose recordings I turn again and again, confident of the fun of her Mistress Quickly, the insouciance of her Carmen, the grand impetuosity of her Azucena, and the gorgeous poise of her Adalgisa.