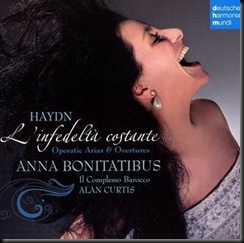 One of the most significant of the anniversaries that are marked in 2009 is the bicentennial of the death on 31 May 1809 of Franz Joseph Haydn, an event that not only extinguished one of the greatest musical talents the world has known but also effectively brought to its close the Classical period in European concert music.  Haydn’s long life meant that his career spanned the entire tumultuous second half of the eighteenth century, his first works having been composed when Händel remained active (not least in the composition of sacred oratorio, a genre to which Haydn would contribute one of its greatest masterpieces) and his last works ushering in early Viennese Romanticism as developed by Beethoven and Schubert.  Detailed analysis reveals that Haydn’s legacy as ‘father’ of the modern symphony and ‘inventor’ of the string quartet as it is now understood is not altogether accurate, as both forms existed at least fundamentally prior to the start of Haydn’s career, but the suggestion that Haydn perfected the Classical symphony, advancing the form with 106 of his own symphonies from Baroque foundations to the towering works of nineteenth-century composers, and string quartet, as well as having developed sonata form in perhaps the most influential manner among eighteenth-century composers, is not unfounded.

Not unlike those of his most celebrated contemporary Mozart, Haydn’s operas are transitional works, adopting elements of Baroque opera (particularly in earlier scores) and gradually integrating stylistic innovations that opened the road leading to Fidelio and Der Freischütz.  Even now, when scholars almost universally acknowledge them as important and beautiful works, Haydn’s operas are largely unknown, familiar to most listeners solely from the enterprising Philips series of the Esterháza operas, conducted by Antal Doráti, and a smattering of other recordings.  Lovers of Haydn’s vocal music who hoped for an impressive crop of new (or even reissued) recordings to mark the bicentennial of the composer’s death have been offered only a new Orlando Paladino (also on deutsche harmonia mundi), conducted by Nikolaus Harnoncourt and recorded in concert in 2005.  [NOTE: The Orfeo label has announced the release of a new disc of Haydn’s operatic arias (along with one from the oratorio Il Ritorno di Tobia) featuring Slovakian soprano Simona Šaturová and the NDR Radiophilharmonie, conducted by Alessandro de Marchi, due out in Europe on 29 June.]

The Haydn enthusiast owes a wealth of gratitude to deutsche harmonia mundi for the present disc from Il Complesso Barocco, temporarily taking a respite from their usual Baroque repertory.  Surprisingly, Alan Curtis and Il Complesso Barocco find in the music of Haydn recorded on this disc a remarkably congenial playground for their enthusiastic virtuosity.  The four overtures included tinkle and thump along gloriously, the ‘bite’ of the period instruments’ collective and individual sonorities bringing a fresh profile to the carefully-constructed rhythms with which Haydn framed his music.  Especially in the frequently delightful passages for horns and woodwinds, Il Complesso Barocco sound even finer than in their recent Händel recordings.  Mr. Curtis gets at the heart of every number, shaping the overtures with bounce and precision and approaching every recitative and aria with in-depth attention to both music and text.  The challenges of maintaining the impetus of a performance of a complete score from start to finish abated in the context of this recording, Mr. Curtis proves wonderfully adept at making maximum impact in each piece without overinflating the natural dimensions of the music.

The arias on the disc represent the finest elements of Haydn’s operatic writing, vocal lines both supported with the finesse one might expect from a master symphonist and composed with a grace that suggests innate understanding of the human voice.  Listening to these arias, mostly impassioned outbursts from put-upon heroines (the finest of which is arguably Rosina’s ‘Dove fuggo, ove m’ascondo’ from La vera costanza, so memorably sung on records by Jessye Norman), it is astonishing to note the frequency with which a snippet of a melodic line, the delicacy of an accompaniment, or the progression of a phrase calls to mind Mozart, whose operatic sensibilities are at least conventionally thought to far exceed those exhibited by Haydn.  It would be difficult to dispute the argument that Mozart’s operas reveal more deeply-felt, humanistic musical characterization than those of his contemporaries.  Nevertheless, the arias recorded on this disc reveal that Haydn’s operas at their best suffer nothing in comparison with the works of his contemporaries, Mozart included, as music per se.

The credit for this impression belongs almost solely to Italian mezzo-soprano Anna Bonitatibus, a young singer whose darkly sensuous voice is somewhat reminiscent of Cecilia Bartoli’s, though richer and more even in production across a wide range.  Ms. Bonitatibus has proven herself as a Baroque singer of the first order on stages throughout Europe, as well as on critically-acclaimed recordings (including Andrea Marcon’s spirited and touching recording of Vivaldi’s Andromeda liberata).  Haydn’s arias do not provide quite the coloratura hurdles Ms. Bonitatibus encounters in her Baroque repertory, but the technical demands of the music on this disc are formidable, not just in bravura passages but equally in those demanding aristocratic poise.  There are, in fact, passages among these arias that would not seem out of place were they uttered by Mozart’s Contessa or Fiordiligi.  In these passages, Ms. Bonitatibus’ voice radiates the calm musicality that makes of simple melodies exquisite expressions of human emotions.  When passions ignite and the music boils, Ms. Bonitatibus rises to every challenge, her technique encompassing fleet, unaspirated traversals of roulades, leaps of wide intervals, and an impeccably-formed trill.  Ms. Bonitatibus’ singing suggests a near-infinite field of possibilities in this repertory, not least Haydn’s fire-breathing but compellingly vulnerable Armida.

His prowess in opera notwithstanding, it may be that Haydn reached his pinnacle of expression through operatic vocalism in his cantata Arianna a Naxos, an exploration of the mythological abandonment of Ariadne by Theseus.  Essentially an opera in miniature (and, in both its musical quality and depth of emotional involvement, not unlike Monteverdi’s great Lamento d’Arianna), Haydn put the best of his artistry into the cantata, composing music that in its mythological grandeur and timeless pathos stands worthy of comparison with the larger-scale works in similar veins by Gluck and Berlioz.  Accompanying Ms. Bonitatibus at the fortepiano, Mr. Curtis proves a very able, even inspired partner, allowing Ms. Bonitatibus ample room in which to expand her lines and pushing only when the music suggests that the hectic fury of Ariadne’s thoughts races against her heartbreak.  Ms. Bonitatibus sings with an intensity that fully reveals the stature of the music and also takes the listener on Ariadne’s journey from bewilderment to despair.  Ms. Bonitatibus accomplishes this with tone both plangent and piquant, the words forward and on the breath without taking precedence over the music.  For this performance alone this disc is indispensible, as much to those who doubt Haydn’s value as a composer of vocal music as to those who appreciate Haydn’s music without compromise.

With sharp, articulate playing and singing of such merit, a more fitting bicentennial tribute to Haydn’s vocal music than this disc is unimaginable.  It may be hyperbole to suggest that the arias performed in this recital will prompt listeners and impresarios to seek out the complete scores of the operas represented, but it is virtually impossible to imagine this disc collecting dust on the shelves of lovers of superb singing.