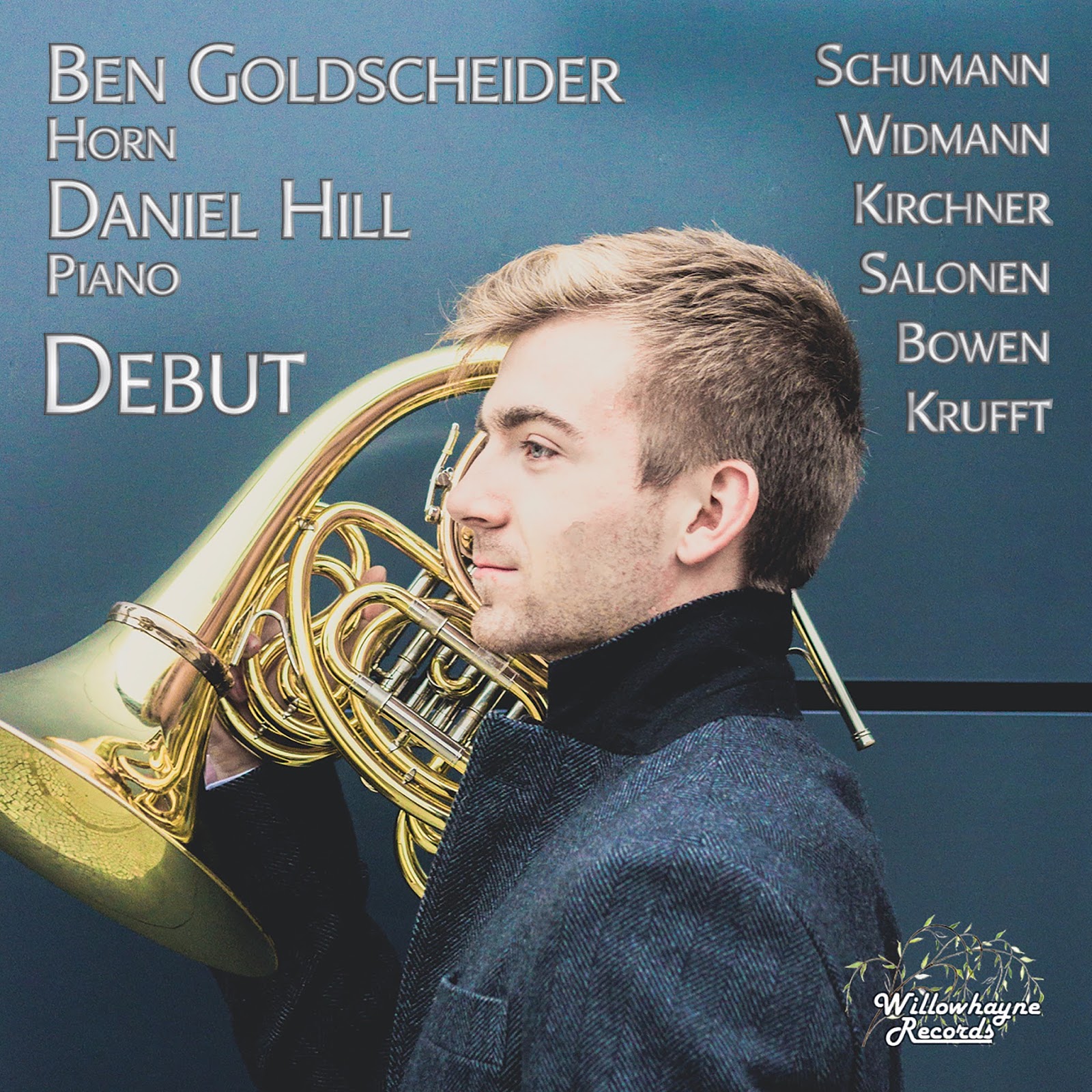 Six decades after his death, one man’s name continues to reverberate in the affections of English-speaking people who appreciate the complex art of horn playing: Dennis Brain. Sufficiently esteemed beyond the linguistic and musical diasporas of Britain to have inspired Francis Poulenc to compose his moving Elégie for horn and piano on the day after the musician’s untimely death in a motorway crash, Brain came in his brief life to dominate public awareness of his instrument to a degree that perhaps no other Twentieth-Century musician managed to do. A virtuoso of both technique and style, Brain displayed a remarkable understanding of the evolution of writing for the horn, including in his repertoire music ranging from Eighteenth-Century concerti by Joseph Haydn and Mozart to then-new pieces created for him by his contemporaries. The world’s orchestras are continually populated with capable horn players, but lamentations for the lack of musicians of Brain’s caliber among today’s horn sections are misleading. In truth, like singers of the stature of Kirsten Flagstad and Maria Callas, a horn virtuoso of Brain’s technical and interpretive abilities is ever exceedingly rare. The emergence of Hertfordshire-born horn virtuoso Ben Goldscheider is therefore all the more exciting. A musician whose credentials belie his youth, Goldscheider proclaims with this impressively-engineered, absorbing Willowhayne Records release that he is poised to honor Brain’s legacy with his own once-in-a-generation artistry.

Ideally, a musician’s début recording should provide the listener with introductions not only to the player’s technique but, more importantly, to his artistic personality, as well. Any young musician given an opportunity to make a recording must be presumed to have achieved a respectable level of technical proficiency, but conservatories regularly produce phalanxes of able technicians. Beyond satisfying the listener’s curiosity about the player’s mastery of his instrument, the question that a début recording should answer is this: what makes this musician unique? As an exhibition of the singular qualities that set him apart from his colleagues, this disc is especially valuable, but Ben Goldscheider’s Debut is equally enjoyable as a recital of astutely-chosen pieces that survey the development of writing for the horn during the past two centuries. Crucially, Goldscheider approaches each work on its own terms, consistent in his command of the horn’s mechanics but also splendidly attentive to the ever-adapting styles of the music.

The Air for solo horn of German clarinetist, conductor, and composer Jörg Widmann is a logical starting point for the young musician’s exploration of his instrument’s and his own capacities for expression. Here and in all of the selections on the disc, his management of intonation and dynamics is impeccable, and the evenness of tone that he produces is indicative of superb breath control. Beauty is not always a trait that can be cited in assessments of brass playing, but the singing quality that Goldscheider achieves in his shaping of the lyrical lines of Widmann’s music is truly beautiful. A horn’s valves make smooth transitions among intervals reliant upon the player’s finesse, and Goldscheider impresses with extended spans of legato.

A contemporary of Beethoven, Viennese composer Nikolaus von Krufft was also a cofounder of the prestigious Wiener Allgemeine musikalische Zeitung and an early champion of German Lied whose publication of a collection of finely-crafted songs in 1798 paved the way for Schubert and subsequent composers of Lieder. There are Lied-like episodes worthy of Schubert’s melodic prodigality in von Krufft’s skillfully-written Sonata for piano and horn in E major, in his performance of which Goldscheider is joined by pianist Daniel Hill. The collaboration between Goldscheider and Hill is indeed like that of a Lieder singer and accompanist, their playing following not only the dictates of the music but also the nuances of one another’s phrasing. In the opening Allegro moderato movement, reminiscent of Antonio Salieri’s similarly-conceived music for wind instruments, hornist and pianist share thematic material like voices in a Monteverdi madrigal, sustaining an elegant flow of melody. The central Andante espressivo is pensive without being melancholic, and Goldscheider interweaves his tones with the piano’s textures to conjure an atmosphere of Arcadian serenity. There are hints of Mendelssohn in the Moderato Rondo alla polacca that concludes the Sonata, hints that Goldscheider amplifies by playing with an effervescence that inspires the wish that Schubert might have written the obbligato in his Lied ‘Der Hirt auf dem Felsen’ for horn rather than for clarinet.

A piece that contrasts markedly with von Krufft’s Sonata, Robert Schumann’s Opus 70 Adagio and Allegro for horn and piano harkens back in spirit if not in actual structure to Johann Sebastian Bach’s organ music. The introductory Adagio discloses an obvious kinship with the slow movements of Schumann’s string quartets and exquisite Opus 44 piano quintet. Hill’s performance displays an admirable understanding of the composer’s intricate writing for the instrument, and Goldscheider plays with a quintessentially Romantic suggestion of yearning, mining the emotional lodes of Schumann’s harmonic progressions. The energetic pulse of the Allegro courses through both musicians’ playing. Schumann’s chamber music is rarely genuinely extroverted, but Goldscheider and Hill unearth the subtle smiles in the Allegro and translate them into alluring sounds.

Native Londoner York Bowen was renowned as both a violist and a horn player, so it is not surprising that his Opus 101 Sonata for horn and piano in E♭ major shows evidence of great affinity for composing for the horn. Even more so than in Schumann’s Sonata, horn and piano—and their players—are engaged in an eloquent, sometimes impassioned conversation. Though he was a contemporary of the leading exponents of the avant garde in British music during the first half of the Twentieth Century, Bowen’s compositional idiom was prevailingly Romantic, allying him more with Elgar than with Britten in his writing for the horn. This might have been perceived as a liability during the course of Bowen’s career, but it is a definite virtue in the context of his Opus 101 Sonata, composed in 1937. There is a pervasive, very British decorum in the Moderato espressivo movement that receives wonderfully gracious handling from Goldscheider and Hill, and the Poco lento maestoso that follows is played with sensitivity that never devolves into sentimentality. As in the final movement of the Schumann Sonata, Goldscheider and Hill bring to their performance of the Allegro con spirito in Bowen’s Sonata a tremendous emission of musical electricity, illuminating the savvy of the composer’s fusing of the horn’s and piano’s timbres. Perhaps the advocacy of a recorded performance as affecting as this one will propel the Sonata along the path to the greater recognition that it so deserves.

Building upon the tradition of music for horn and piano furthered by von Krufft’s and Schumann’s works, German composer Volker David Kirchner’s Tre poemi are evocative, challenging pieces that polish vastly different facets of Goldscheider’s musical persona. The shadows that lurk in ‘Lamento’ are dispelled by the purity of his pitch, the music’s straightforward emotion enhanced by the complete absence of artifice with which both Goldscheider and Hill deliver it. The joviality of ‘Danza’ is guarded, almost like an anxious breeze before a hurricane, but the musicians transport the listener to an uncomplicated celebration in a village town hall. ‘La Gondola funebre’ churns with the relentless motion of water, its mood more one of resignation than of despair. Hill’s playing is hypnotic, luring the listener into the recesses of the music and forcing confrontation with the horn, which seems to emerge from some enigmatic place deep within the harmonies. As Goldscheider plays, it is as though in his tones one is eavesdropping on one’s own thoughts.

Renowned in many musical circles more for his conducting than for his composing, Finn Esa-Pekka Salonen is without question one of the most imaginative musicians in recent memory. His compositional style is difficult to define within the boundaries of tradition parameters, but a compelling intensity often takes root and blossoms organically in his music. This is certainly true of his Concert Étude for solo horn. Its title notwithstanding, the Étude is anything but academic. It is undeniably a learned piece, but its wisdom is personal, not pedantic. The piece demands concentration and rhythmic precision that Goldscheider supplies, but he does not play with a student’s reticence. The years of life to his credit may be few, but the maturity of his performance of Salonen’s Étude is unmistakable. It is difficult music that is here executed with technique and expressivity in optimal equilibrium. Journalists speak of the question behind the question: Goldscheider reaches the music beyond the notes.

Debut is a deceptive disc. During its seventy-five minutes, it is possible to believe that playing the horn is a task at which anyone with good lungs and a bit of patience might succeed. Were it solely a task, perhaps more people could succeed at it, but even the casual music lover knows that more unfortunate Leonores than can be counted have suffered their performances of the formidable ‘Abscheulicher! Wo eilst du hin?’ being marred by poor horn playing and that many traversals of Mahler’s Second Symphony have sunk under the weight of horns’ faltering intonation. The physics of blowing into a twisted tube of metal provides the sound, but it is artistry that makes it music. Debut answers the necessary question about what separates Ben Goldscheider from the ranks of well-qualified horn players. He is a young man with a timeless gift. In his hands, the horn is not an instrument but a conduit for making emotions audible.