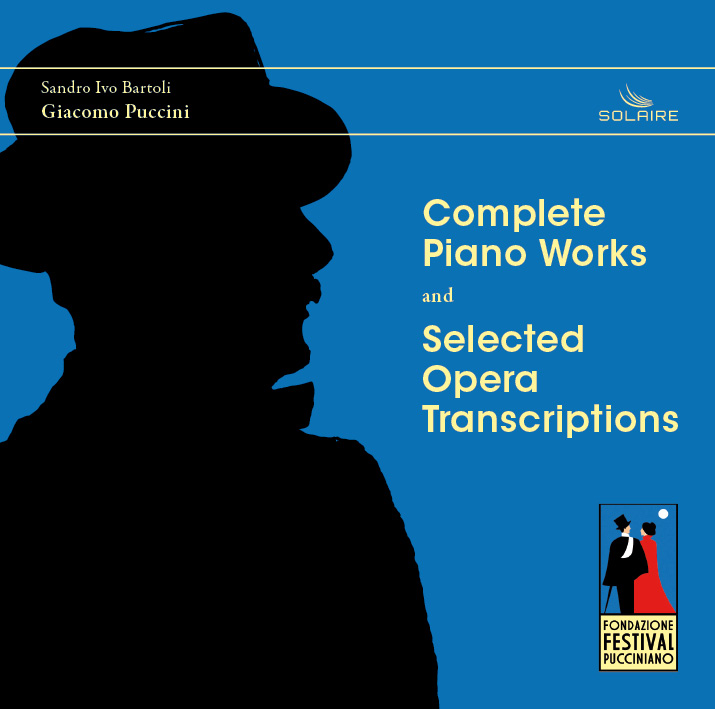 I do not deny that I often drown even my noblest intentions in deluges of words. The greatest danger of approaching the analysis of music with a literary mind is allowing the love of writing to overwhelm the necessity of being read. Too frequently, I cannot overcome the compulsion to write an Edward Everett oration when a Gettysburg Address with easily-extracted talking points would be preferred. It is a disease that resists therapy and is perhaps ultimately fatal to the integrity of an earnest crusade to restore to criticism its own kind of artistry.

Sandro Ivo Bartoli’s Solaire Records recital of music for solo piano by Giacomo Puccini, supplemented by Carlo Carignani’s arrangements of themes from Puccini’s operas, is a disc that inspires appreciation that must not be fed to the insatiable beast of verbosity. As in all of his recorded performances with which I am familiar, the technical skill that Bartoli brings to his playing is irreproachable: were there a need for such stunts, he could undoubtedly play the most difficult of Alexander Scriabin’s piano sonatas whilst blindfolded and subjected to all sorts of adverse conditions. Bartoli is not a well-designed automaton, however, and he does not play like one. Rather, his performances breathe. By the motions of his wrists, the music before him inhales and exhales, the notes and chords becoming atoms and molecules in the atmospheres that emanate from composers’ scores. Even if the music that he performs is sparse and atonal, his playing retains a pervasive aura of bel canto.

It became fashionable in the second half of the Twentieth Century and inexplicably remains a badge of honor in some musical circles in the Twenty-First Century to dismiss Puccini’s music as formulaic, undistinguished, and embarrassingly sentimental. Passages from virtually every score that Puccini produced can be cited in validation of these accusations, but it is not an honest operaphile who proclaims that every bar of Le nozze di Figaro, Tristan und Isolde, or Falstaff bears obvious evidence of genius.

In an effort at fairly assessing the merits of Puccini’s music, consider La bohème, a score labeled by some connoisseurs as unendurably saccharine. On stage and in studio, Mimì and Rodolfo are sometimes older than convention suggests that amorous Bohemians ought to be, sometimes fatter, sometimes older and fatter, and, among listeners who surrender their prejudices to the music, has a truly well-sung but zaftig Mimì ever prompted the notion that her death might have been affecting had binoculars been required to see her waistline from the first row of the stalls? There are combinations of emotional qualities in Puccini’s scores that refuse to be suppressed. Bad performances reveal the blemishes, to be sure, but performances like Bartoli offers on this disc celebrate the beauties of Puccini’s music with a blaze of passion that no pseudo-academic disapprobation can wholly extinguish.

Among the pieces included on this disc, only the first six are the work of Puccini in the sense that the composer himself was wholly responsible for their creation—and, in the cases of at least two of the pieces, that attribution is not universally accepted as factual. Possibly a study for the slow movement of an unfinished D-major string quartet that occupied Puccini in 1882, whilst he was studying composition under the tutelage of Antonio Bazzini, the Adagio in A major is a delightful discovery, its graceful melodic lines, eventually adapted to new surroundings in 1883 in both the Capriccio sinfonico and the opera Le Villi, bewitchingly extended by Bartoli’s phrasing. The limited but imaginative thematic development suggests that the music may well trace its genesis to the aborted string quartet, but Bartoli brings it to the piano with panache.

Composed in 1894, the Lento molto Piccolo Valzer eventually metamorphosed into Musetta’s aria ‘Quando m’en vo’ soletta per la via’ in Act Two of La bohème, its opening theme as familiar as the melodies of Verdi’s ‘La donna è mobile’ and Puccini’s later ‘Nessun dorma.’ Bartoli conveys the wistfulness of the tune more touchingly than almost any Musetta: without the subtext of the character’s toying with Alcindoro and Marcello, the melancholic core of the melody resounds. Bartoli plays without a trace of artifice, the sincerity of his performance heightening the piece’s expressivity. Similarly, Bartoli wields compelling—and fitting—energy in his playing of the Marcetta brillante Scossa Elettrica, commissioned in 1899 to celebrate the centenary of Alessandro Volta’s invention of the electric battery.

In Bartoli’s handling, both the ‘moderato’ and the ‘con affetto’ components of Puccini’s instructions for Foglio d’Album are realized with subtlety. This and the Piccolo Tango possess harmonic nuances of near-Impressionistic colorations, almost as though Puccini learned the art of composition for the piano from the young Debussy. The lack of autograph manuscripts has exposed these pieces to doubts about their origins, but Bartoli’s idiomatically persuasive performances of them silence any debat. Verification of their authorship may be difficult, but enjoying the pianist’s playing is easy. A mere sixteen bars in duration, the Calmo e molto lento Pezzo per pianoforte was written in 1916 in tribute to the appalling human toll of World War One, the effects of which reverberated through the Arts until the atrocities of the Second World War dominated cultural consciousness. Lovingly played here by Bartoli, Puccini’s piece is poignantly understated, imparting collective senses of loss and reflection. For sixteen bars, Puccini gave the piano the communicative power of Wilfred Owen’s poetry, and Bartoli’s interpretation of Pezzo per pianoforte conveys the full meaning of Owen’s declaration that, when writing of the horrors of war and human cruelty, ‘the Poetry is in the pity.’

An almost exact contemporary of Puccini, as well as a fellow native of Lucca and an accomplished musician in his own right, Carlo Carignani created arrangements for piano of excerpts from Puccini’s operas that divulge abundant musicality. Both of the pieces from Tosca included on this disc, the cantata ‘Sale, ascende l’uman cantico’ and Tosca’s aria ‘Vissi d’arte, vissi d’amore’ from Act Two, project the moods of the respective scenes in the opera. How much more effective many performances of Tosca would be were their leading ladies capable of sculpting the line as artfully as Bartoli does in his ‘singing’ of the aria! The Preludes to Act One of Le Villi and Act Three of Edgar were reimagined for the piano by Carignani and are delivered by Bartoli with complementary intelligence, the calibre of the former’s craftsmanship honored by the depth of the latter’s concentration.

The central episode in Il trittico, premièred at The Metropolitan Opera in 1918 with Geraldine Farrar as its titular postulant, Suor Angelica falls victim to particularly vehement scorn for its musical construction and its narrative of a woman who receives absolution after ending her own life upon learning of the death of the child from whom she was separated. In Bartoli’s performance of Carignani’s arrangement of the opera’s Intermezzo, one hears the devastated mother’s restlessness as she prepares the potion that will reunite her with her son, anticipating the elation of the meeting between parent and child. Music is often a realm of extremes in which middle ground can be difficult to find and even harder to occupy, and this year’s centennial of Il trittico’s world première is a suitable occasion for reminding listeners of the foolishness of slavishly replicating others’ preconceptions. Puccini unquestionably aimed for the tear ducts in Suor Angelica, but is the idea of feeling empathy for a grieving mother, albeit a fictional one, really so deserving of contempt? Transcending music, Bartoli’s performance of the opera’s Intermezzo is a timely lesson in compassion.

The principal subjects of Cio-Cio San’s aria ‘Un bel dì vedremo’ and the Coro a bocca chiusa (the Humming Chorus) from Act Two of Madama Butterfly are two of Puccini’s most widely-known melodies, and Carignani arranged them for piano with remarkable sensitivity. The ambiance of Puccini’s Nagasaki permeates Carignani’s work, and Bartoli’s finesse brings Cio-Cio San to life with moving immediacy. With his articulation of ‘Un bel dì vedremo,’ Bartoli evokes the simplicity of Margaret Sheridan, the heartbreak of Maria Callas, and the eloquence of Renata Scotto. In his playing of the Humming Chorus, Butterfly’s yearning for Pinkerton’s return surges in the music’s familiar strains. Before hearing this disc, I would never have anticipated one of the foremost interpreters of Cio-Cio San’s tragedy being a pianist.

As he was preparing to depart from New York City after attending performances of Manon Lescaut and Tosca at the Metropolitan Opera, Puccini and his wife bade farewell to their American hosts with gracious remarks that were preserved for posterity by Columbia Phonographic Company. Recorded on 21 February 1907, those few words provide today’s listeners’ sole opportunity to hear Puccini’s voice—until the release of this disc, that is. No words are spoken here, but Puccini speaks as clearly in the performances on this disc as he did in Columbia’s studio more than a century ago. With his playing, Sandro Ivo Bartoli translates Puccini’s discourse into language that all hearers can understand.