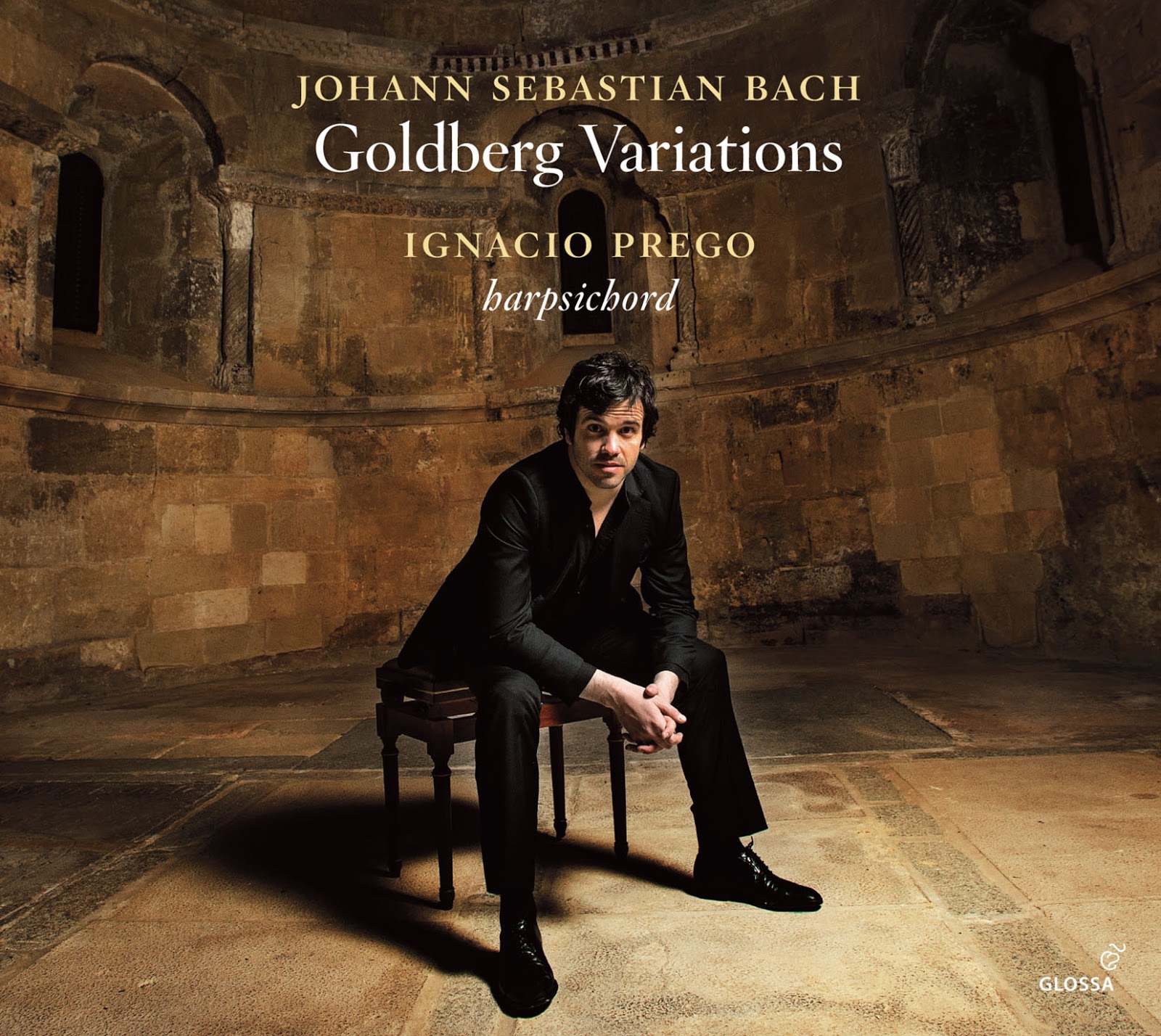 ​In a musical history from which so many pages are exasperatingly missing, one episode in the career of Johann Sebastian Bach that is at least moderately well-documented is his composition of the so-called Goldberg Variations. Unlike the vast majority of Bach’s many works, the aria and its thirty variations were published during the composer’s lifetime, appearing in print in 1741 in copies pressed from hand-engraved, error-filled copper plates prepared in Nürnberg by Bach’s acquaintance Balthasar Schmid. Bearing the title ‘Clavier Ubung bestehend in einer ARIA mit verschiedenen Verænderungen vors Clavicimbal mit 2 Manualen,’ the Schmid edition leaves no doubt that Bach intended for the work to be performed on a double-manual harpsichord, a conclusion further solidified by corrections in the composer’s own hand in one of the nineteen surviving copies from Schmid’s initial print run. Even with this wealth of evidence, though, there are unanswered—and now likely to remain unanswerable—questions about the genesis of the Goldberg Variations. If the oft-repeated story suggesting that the variations were composed in fulfillment of an explicit commission from an insomniac Russian aristocrat is credible, why does the score have no dedication to the patron to whom its existence was owed, and why, if intended solely for private performance, was Bach allowed to publish it?

​A logical point at which to begin wrangling with the variations’ enigmas is the obvious question suggested by the title by which the work came to be identified: who was Goldberg? Born in the Prussian town of Danzig (now Gdańsk, Poland) in 1727, Johann Gottlieb Goldberg had achieved the advanced age of fourteen by the time that the variations that now carry his surname were published, a circumstance that has led some Bach biographers to dismiss as apocryphal the notion that the variations were composed for the adolescent Goldberg to play on demand for the soothing of his employer, Count Hermann-Karl von Keyserlingk, the Russian ambassador to Saxony. Mozart, Mendelssohn, and virtually any of Bach’s children could certainly have played—or written, for that matter—the variations at the age of fourteen, and Goldberg having garnered aristocratic patronage and contact with Bach at an early age suggests some degree of precocity. It is not beyond the realm of possibility that the adolescent Goldberg was to his master what Farinelli was in his retirement to the Spanish court, an exceptional talent reserved for private enjoyment. In spite of gnawing inquisitiveness, though, to concentrate too much on solving what is now likely to remain an inscrutable mystery is perhaps to overlook the greatest thrill of the Goldberg Variations: experiencing them as their still-unidentified first performer and hearer must have known them more than two centuries ago.

Playing a clarion-toned harpsichord built in Milan in 2004 in the mode of a Christian Vater instrument dating from 1738, Spanish harpsichordist Ignacio Prego surprises, educates, and gladdens the listener wearied by lifeless, pedantic performances of Bach’s music with a sparkling, stimulating traversal of the Goldberg Variations. One of his generation’s most ruminative artists, one whose talents as a soloist were confirmed by his superb Cantus Records recording of Bach’s French Suites [reviewed here] and whose expertise in continuo playing is revealed on the recently-released Glossa disc featuring music from Cervantes-inspired operas by Antonio Caldara [The Cervantes Operas featuring La Ritirata and Josetxu Obregón—Glossa GCD 923104], Prego brings to his playing of the Goldberg Variations an exuberant youthfulness tempered by profound respect for both the music and previous interpretations of it. In this performance, there is never a sense of a young musician making radical choices solely for the sake of putting his idiosyncratic ‘stamp’ on the music. Rather, Prego has clearly studied and appreciated the efforts of Bach interpreters ranging from Wanda Landowska (and her magnificently anachronistic Pleyel harpsichord)​ ​and lead-wristed pianists​​ ​to more recent, historically-informed practitioners. There are many harpsichordists capable of playing the Goldbergs proficiently, but mastery of this music depends upon skills only partially governed by technique: imagination and individuality. Bach was an innovator, and his works are frequently mistreated by performers who follow fads rather than the music. On this disc, however, Bach’s music is in exceptionally loving, properly-guided hands.

Presented with the informed advocacy of a doctoral thesis on the interpretation of the variations, Prego’s performance begins with an account of the Aria that truly sings, the player’s measured tempo enabling atypically clear articulation—and appreciation on the listener’s part—of the subject that is subsequently so adroitly handled by the composer. Throughout his performance, Prego shapes each variation like a paragraph in a continuous narrative, the first pair of variations phrased with keen focus on Bach’s use of the source thematic material. The third variation, Canone all’ Unisuono, receives a performance that revels in the music’s contrapuntal intricacies without turning the piece into a dull academic treatise. Vitality is at the heart of Prego’s playing of the fourth and fifth variations, as well, and the expressive harmonic nuances of the sixth variation, Canone alla Seconda, are drawn to the surface by the young harpsichordist’s wonderful animation of inner voices. The subtle transitions of mood and chromatic twists in the seventh and eighth variations here lead organically to the brilliant virtuosity exhibited in the ninth and tenth variations, Canone alla Terza and Fughetta. For the next pair of variations, culminating in the Canone alla Quarta of the twelfth, Prego summons a burst of interpretive energy that he channels into the darkest recesses of the music, spotlighting thematic links lurking in the densest passages. This spirit of adventure persists in his deliveries of the very different thirteenth and fourteenth variations, the undulating melodic lines of which are traced with determined delicacy. Notable throughout the variations is the combination of strength and softness that Prego employs: passages that demand raw power receive it, but the prevailing lyricism of Prego’s playing, disclosing felicities in Bach’s writing that remain hidden in many other keyboardists’ performances, gives compelling credence to the notion of the Goldbergs having been composed to soothe a restless mind. The Canone alla Quinta of the fifteenth variation blossoms under Prego’s care, Bach’s treatment of the principal subject illuminated by the unexaggerated lightness of the harpsichordist’s approach. Some musicians are ostensibly inclined to toil at making this music sound important: Prego is content to allow the variations’ importance to emerge by pursuing no agenda but Bach’s.

With the Ouverture of the sixteenth variation, Prego figuratively begins the Goldbergs’ homeward journey, christening the voyage with an effervescent toast to the Ouverture’s musical landscape. The crispness of his executions of Bach’s ornaments contrasts marvelously with the graceful flow of his playing. The transition to the seventeenth variation has the unforced awe of rounding a curve in the road and seeing a wholly new vista, and the Canone alla Sexta of the eighteenth variation transforms that vista with the diverting novelty of a kaleidoscope. The linear momentum of the nineteenth and twentieth variations surges from Prego’s fingers but never at the expense of the music’s latent poise. From the bustling interplay of voices in the twenty-first variation’s Canone alla Settima, the sequence of the twenty-second and twenty-third variations progresses naturally, never hurried, to the fugal kinesis of the twenty-fourth variation’s Canone all’ Ottava. Similarly, the tuneful springs of variations twenty-five and twenty-six, tapped by Prego with especially sensitive playing, feed the deluge of invention that gushes from the Canone alla Nona of the twenty-seventh variation. Prego dedicates particular attention to the thematic relationships woven into the resplendent fabrics of the final three variations, facilitating heightened recognition of the triadic structures that Bach utilized throughout the Goldbergs. Whether the remarkable mathematical precision of Bach’s work was achieved by design or arose unintentionally from his unparalleled skill for fostering musical symbiosis, the Goldbergs are essentially a brilliant algorithm, one enacted by Prego with the computational genius of René Descartes. Still more rewarding is the emotional directness with which the harpsichordist bares the souls of variations twenty-eight and twenty-nine, every note of his performances allied with its purpose within the scope of the Goldbergs. So, too, is the Quodlibet of the final variation given expertly-judged emphases on both its individual qualities and its function within the Goldbergs as an unified entity. In his playing of the Aria’s da capo​, Pregro resolves the cycle with a potent reminder of the sentiments that provided the journey with its expressive destination. This is no carbon copy of the opening Aria, however. Prego evokes a conscious feeling of fulfillment, his unerring musical stewardship having led the listener into the presence of the true spirit of the Goldbergs and into the wondrous heart of Bach’s creativity.

The musical milieux of the first half of the Eighteenth Century inspire many confounding questions among modern musicologists, musicians, and audiences. To precisely which pitch were instruments in a particular venue tuned? How did the realization of continuo in one city differ from those in other cities? How did the voices of great castrati like Farinelli and Senesino truly sound? Alongside such queries as these, the questions of for whose performance and for whose enjoyment the Goldberg Variations were intended seem largely insignificant, especially considering that questions of provenance have—or should have—little effect on performance of the music. That Ignacio Prego is an accomplished technician is apparent as soon as his fingers cause plectra to make contact with strings, but the finest aspects of his artistry emerge when the sounds that result from his playing cause listeners to surrender their preconceptions and prejudices to the seduction of music in its most distilled forms. In his performance of the Goldberg Variations, this gifted young musician renders the music’s lingering conundra inconsequential. What matters is the quality of the music, and this music has never sounded more beautiful, searching, or revolutionary than in Ignacio Prego’s performance on this indispensable disc.