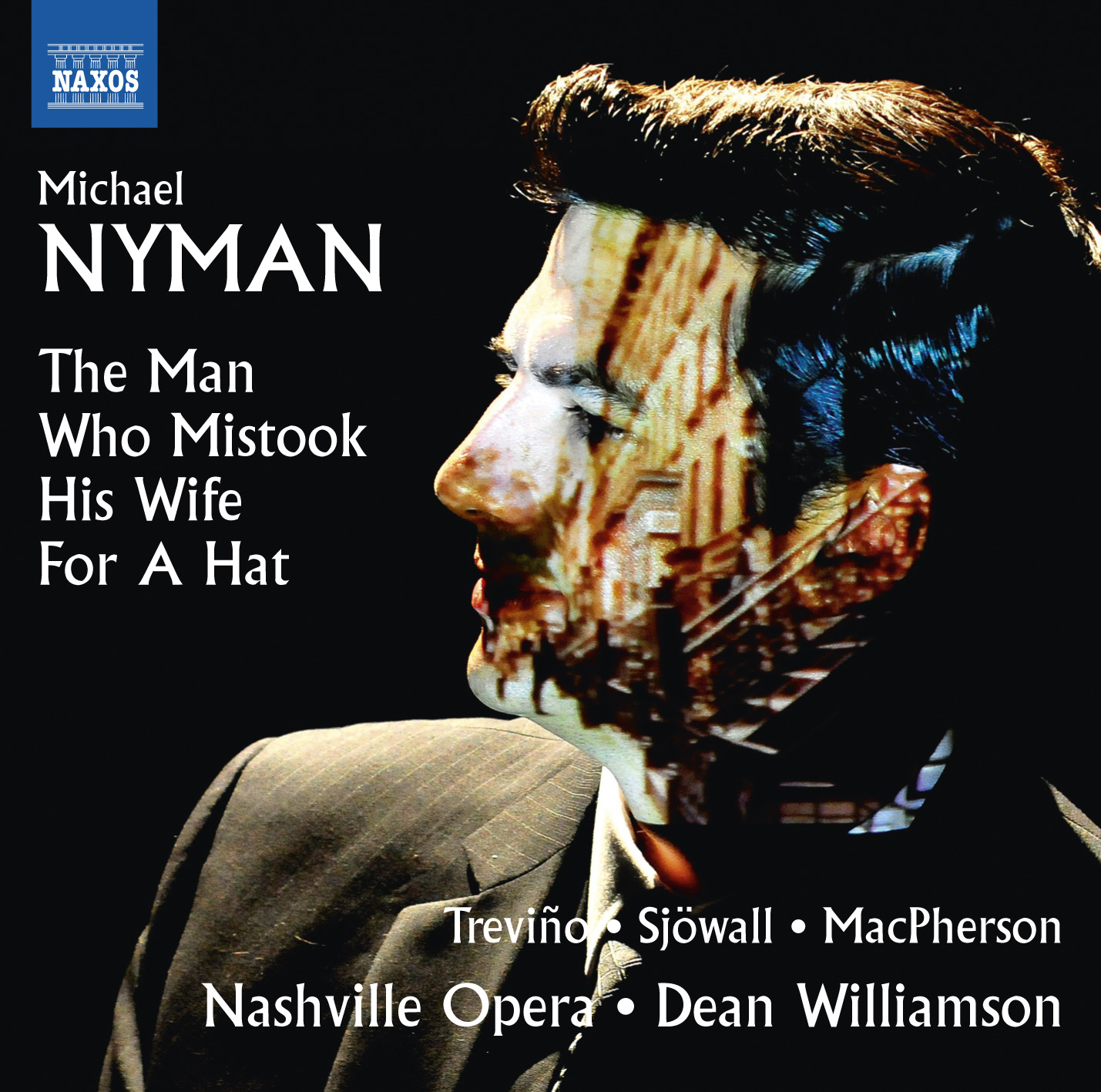 Not even the most eloquent words can fully express the enormity of the extent to which human existence has changed in the seventy-one years since the end of World War Two. As we spin on our appointed orbital path, technology enables us to know precisely where we are and from whence we came at every moment, but we often seem unable or unwilling to recall, in a figurative sense, who we are or ought to be. From this collective identity crisis, a product of the horrors of war and Holocaust and the struggles of recovery and reform, arose the Theatre of the Absurd, a literary movement that reflected—and continues to reflect—the dissociative inclinations of modern civilization. Adapted by the composer, librettist Christopher Rawlence, and Michael Morris from British-born neurologist Oliver Sacks’s groundbreaking 1985 case study of visual agnosia, a peculiar condition that affects sufferers’ capacities to visually identify known items without compromising their actual vision or memory, Michael Nyman’s The Man Who Mistook His Wife for a Hat is a startling, thought-provoking parable of man’s frequent inability to connect with himself and the world that he inhabits, a musical extension of the Theatre of the Absurd that recalls the psychological penetration of Edward Albee’s plays. Celebrating the thirtieth anniversary of the opera’s 1986 première at London’s Institute of Contemporary Arts, this superb NAXOS release documents a realization of Nyman’s concentrated drama for Nashville Opera by visionary director John Hoomes, whose erudition recreated the opera within a discernibly contemporary but ultimately timeless context. The Man Who Mistook His Wife for a Hat is a narrative of intensely personal, intimately-scaled trials and triumphs, but the performance on this disc poignantly makes the tribulations of Nyman’s three characters those of every listener.

​Expertly led by conductor Dean Williamson, the talented musicians from the Nashville Opera Orchestra—violinists Dave Davidson and Conni Ellisor, violist Simona Rusu, cellists Michael Samis and Sari Reist, harpist Mary Alice Hoepfinger, and pianist Amy Tate Williams—fill every bar of Nyman’s score with shimmering sounds that powerfully impart the dramatic crux of each scene. The purpose of every ostinato is here made apparent, and the billowing, vocalise-like cascades of the singer’s melodic lines are paralleled and perfectly supported by the musicians’ playing. Every part is integral to the whole, but Hoepfinger and Williams give especially strong performances of very difficult music. Williamson paces the opera with such immediacy that the performance’s fifty-eight minutes dart past, but passages that demand a slowing of the dramatic propulsion unfailingly receive it. Staging The Man Who Mistook His Wife for a Hat in Nashville was a brave venture, as it would be for virtually any American opera company, but, weighing the evidence of this recording, is there any score in the standard repertory that Nashville Opera might have performed at a higher level? When not even a well-executed Carmen or La bohème is guaranteed to fill seats, how much more fulfilling it is to have a performance of this quality of less-known repertory. Both the enthusiastic audience and critical reception for Hoomes’s production and the caliber of this recording confirm that Nashville is as nurturing a home for grand opera as for the Grand Ole Opry.

​Nyman’s style in The Man Who Mistook His Wife for a Hat is unapologetically minimalist, but the repetitive figurations in the orchestra do not stifle an air of mesmerizing lyricism. As in Philip Glass’s Satyagraha, melodic fragments occur throughout Nyman’s score and are assembled by the composer into an overall thematic profile that permeates each of the opera’s scenes. Cinematic in scope, the opera progresses like a musical My Dinner with Andre, words guiding the chronicle’s course. In the opera’s ​​​​Prologue, which in a dramatic sense is not unlike the opening scene of Benjamin Britten’s The Turn of the Screw, the Sacks-like neurologist of tenor Ryan MacPherson is introduced with music and text of detachment, the clinician preserving professional courtesy in his initial description of the case under his examination. Whether sung or spoken, MacPherson’s crystal-clear diction is an asset throughout the performance, and he makes the neurologist’s utterances sound credibly academic but never cold or unfeeling.

When the object of the neurologist’s scrutiny and his wife, Dr. and Mrs. P, are met in the subsequent scene, ‘​The First Examination,’ MacPherson becomes an active participant in the story rather than an objective observer, and the added warmth with which MacPherson infuses his singing translates this shift in perspectives into sound. Portraying Dr. P with charm and sympathetic humility, bass Matthew Treviño immediately earns the listener’s attention and affection. The surreal difficulties endured by Mrs. P are brought into sharp focus by the singing of soprano Rebecca Sjöwall, her voice taking on a steely edge as her vocal lines climb. The mounting vexation of ‘Traffic,’ ‘The Shoe,’ and ‘The Slides’ ripples through the music, and the singers and Nashville Opera musicians channel this vehemence into their performances. In both voices and instruments, the tenderness that alters the atmosphere in ‘The River’ and ‘The Dressing Ritual’ prompts an outpouring of expressivity that thrusts the hearts of the characters and of the opera itself to the surface.

It is not merely in terms of its placement in the score that ‘The House Call’ is the opera’s core. With his astute use of the descant of ‘Ich grolle nicht’ from Robert Schumann’s Dichterliebe, Nyman increases and intensifies the link between the isolation resulting from Dr. P’s condition and artists’ eternal combat with misunderstanding and rejection. The sounds that emerge from ‘The Solids’ and ‘The Photographs’ evoke the tangible aspects of life, objects that can be handled and hoarded, while the relentless rhythmic pulse of ‘The Rose,’ ‘The Glove,’ and ‘The Chess Game’ conjure recollections of responses to internal and external stimuli, rendering the inexplicable circumstances of Dr. P’s malady stunningly comprehensible. Not least in the manipulation of Schumann’s melody, Treviño’s singing in this scene is unstintingly powerful, his ruggedly attractive timbre deployed with full cognizance of the ways in which the basic sound of the voice influences the ways in which the words greet listeners’ ears. At their most challenging for the singers, Nyman’s vocal lines are always written with a confident grasp of the capabilities of human voices, a quality that many contemporary composers have never bothered to acquire, and the fruits of this gift markedly broaden the appeal of The Man Who Mistook His Wife for a Hat.

Both ‘Visual Memory’ and ‘The Street’ contribute unforgettably to the cumulative effectiveness of ‘The Test,’ the scene in which Nyman’s invention is arguably at its most original. In the ‘Paintings as Pathology?’, too, the composer’s innovation is spellbinding, his setting of text in ‘An Argument’ revealing the philosophical depths of his musical and dramatic sensibilities. In these more than in any other scenes in the opera, MacPherson, Treviño, and Sjöwall interact with the intuitive collaboration of chamber musicians. Theirs is the kind of give-and-take coexistence that every operatic ensemble deserves but so few receive. The insights that their cooperative spirit yields gives ‘The Prescription’ an aura of authoritativeness that the same passage in the first recording of The Man Who Mistook His Wife for a Hat. The artists in that performance were no less committed to the opera, but MacPherson, Treviño, and Sjöwall bring these symbolism-laden characters to life with daring familiarity. The earlier Dr. and Mrs. P convince, but Treviño’s and Sjöwall’s portrayals enthrall, their singing not always polished or perfectly-tuned but never debilitatingly stilted or studied.

In the Epilogue, the subdued desolation of ‘The Prognosis’ is movingly evinced by the neurologist’s statement of ‘I cannot tell you what is wrong,’ and Treviño and Sjöwall react to MacPherson’s words with singing of meticulously-judged fortitude, their delivery never overwhelming the text or Nyman’s music. Speaking with exemplary articulation that never seems artificial, MacPherson utters ‘I think that music, for him, took the place of the image’ with utter simplicity that suggests that this migration from one sensitivity to another is second nature. Sjöwall’s vocalism grows more astringent in the opera’s final minutes, aptly suggesting Mrs. P’s agitation and anxiety. That there is no true resolution of the situation in which Nyman’s characters are embroiled is the only valid ending for the opera: a concerted finale of any sort would seem mechanical and contrived. As interpreted by MacPherson, Treviño, and Sjöwall, the sole trajectory that is faithful to the psyches of the people they create is carrying on, and that requires no ceremony or musical fanfare.

In a time in which the sanctity of life has been superseded by glamorized violence and children murder their peers because they believe that fictional characters demand it, the bizarre situations and twisted realities of Samuel Beckett’s Waiting for Godot and Harold Pinter’s The Caretaker, keystones of the Twentieth Century’s literary response to teetering on the edge of annihilation, no longer shock and bewilder as they once did. The absurdities of these seminal works have been exchanged for new, even less fathomable ones, malaises that afflict society rather than populating scenes in plays and pages in books. Humanity in the Twenty-First Century is a cyclone of discontent, denial, and depravity that would challenge the analytical prowess of Sigmund Freud, a tempest that rages in Michael Nyman’s The Man Who Mistook His Wife for a Hat with disquieting ferocity. Perhaps the greatest achievement of this NAXOS recording is how enticing it makes chaos sound.