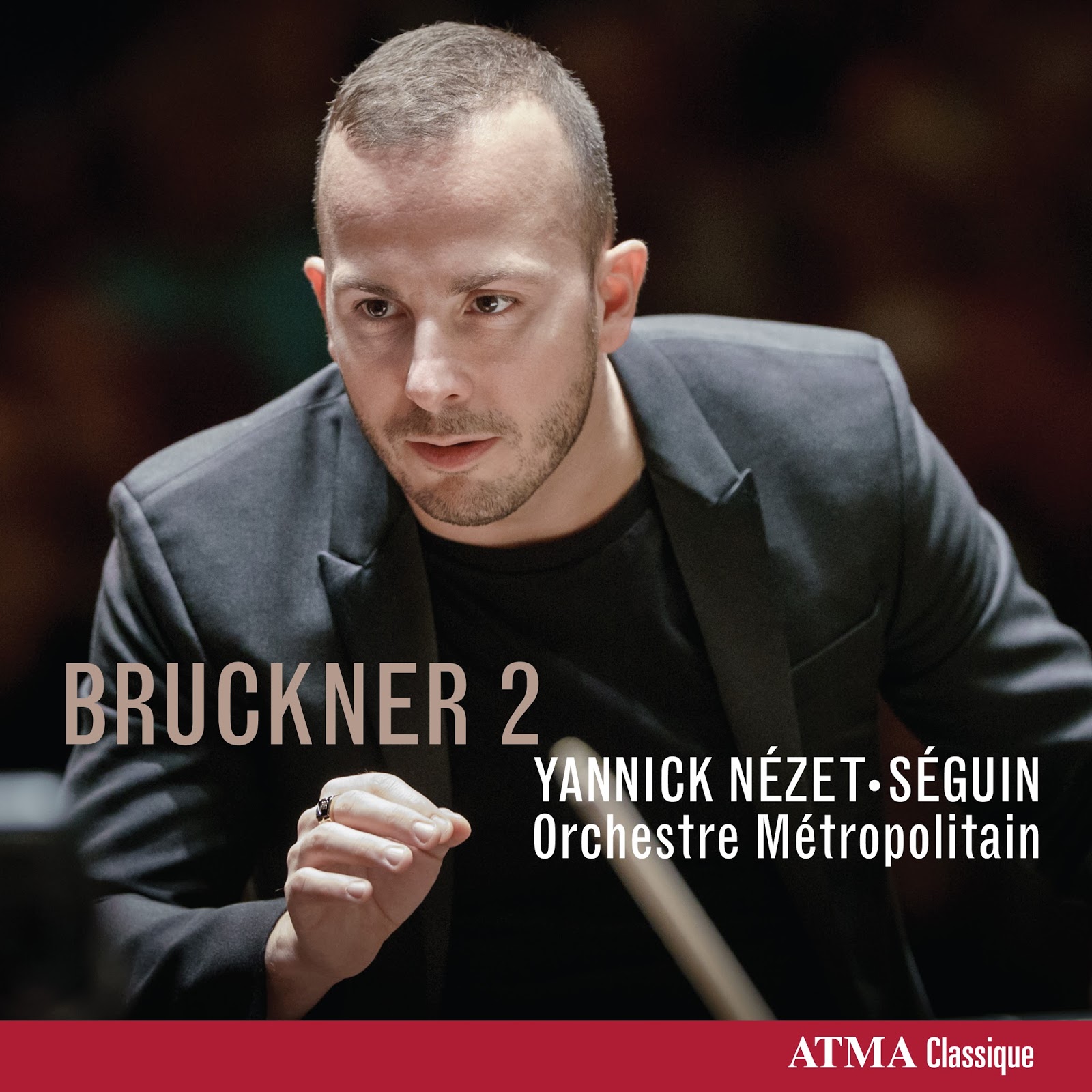 Since the completion of its earliest version in 1872 and its première by the Wiener Philharmoniker under the composer’s direction a year later, Anton Bruckner’s Symphony No. 2 in C minor (WAB 102) has been a source of confusion, frustration, and elation for conductors, musicians, musicologists, and music lovers. Not published until two decades after the completion of the first version, the score underwent extensive revisions, wrought first by the composer himself in the years prior to his death in 1896 and then by scholars who struggled to make sense of the material produced by Bruckner’s reconsiderations. Recorded in well-balanced, spacious sound that conveys a perceptible sense of the fine acoustic ambiance of Montréal’s Maison symphonique, this ATMA Classique performance of Symphony No. 2 by Orchestre Métropolitain and internationally-renowned conductor Yannick Nézet-Séguin continues a commitment to Bruckner’s Symphonies that has thus far produced a series of warmly-received recordings that, alongside his traversal of Robert Schumann’s symphonies for Deutsche Grammophon, have confirmed Nézet-Séguin’s standing as a significant interpreter of Nineteenth-Century symphonic repertory. Among these lauded recordings, the present account of Symphony No. 2 is the most obviously personal of Nézet-Séguin’s recorded Bruckner outings to date. As he is a boundlessly vivacious young man with a smile as bright as the Montréal skyline by night, melancholy would seem as foreign to the conductor’s temperament as rampant arrogance was to the composer’s, but Nézet-Séguin ignores none of the score’s shadows. Still, this is not music of intergalactic tragedy, and this performance deals as successfully with subtle humor as with starkness. There are no definitive answers to the questions posed by Symphony No. 2, but those proposed by Nézet-Séguin and the Montréal musicians on this disc are exceptionally persuasive.

The principal quandaries into which a performance of Bruckner’s Symphony No. 2 wades are questions of the order of the score’s four movements and the matter of a critical horn solo in the final pages of the Adagio movement that was declared unplayable by an early would-be exponent of the part and was subsequently reworked for clarinet and violas. Like Bach’s Passions and many of Händel’s operas and oratorios, a performance of Symphony No. 2 with absolute fidelity to Bruckner’s final thoughts on the score is at best an elusive chimera. For this performance, Nézet-Séguin and his Orchestre Métropolitain colleagues use a composite version of the score that amalgamates Robert Haas’s 1938 edition, primarily based upon the composer’s 1877 revision, with elements from Bruckner’s original structure and later revisions. The work that comes to life in this version possesses greater cohesion than has often been the case with the symphony, and its dimensions here benefit from increased symmetry. The tightening of the score that Bruckner achieved in 1877 is combined with the freshness of his initial invention, producing a free-flowing construction in which the music never hinders the conductor’s efforts at maintaining consistent momentum during thematic development. Bruckner was an avowed devotee of Wagner, but his own motivic writing is more redolent of the Biergarten than of Bayreuth: the links among the movements of Symphony No. 2, clear-sightedly examined but not exaggerated in this performance, are more episodic than literal. This reading wholly avoids falling into the trap of ridiculously treating the symphony’s four movements as a miniature Der Ring des Nibelungen.

As an interpreter of Bruckner’s symphonies, Nézet-Séguin is neither a cupcakes-and-kittens optimist who lathers the music in sentimentality that is never fully rinsed away nor a fatalistic firebrand who scorches and singes the music indiscriminately. This is especially true in this performance of Symphony No. 2, which he paces with a pragmatism not unlike his approach to Gustav Mahler’s Second Symphony. Mahler, who appreciated and espoused Bruckner’s music, assessed the older composer as a musical deity with a pronounced vein of imbecilic tendencies, and if this seems more indelicate than Mahler likely intended it to be it is nonetheless an apt analysis of the man who emerges from Bruckner’s scores. There are undeniable absurdities in Bruckner’s music, but they are fewer in Symphony No. 2 than in other works. The Orchestre Métropolitain musicians respond to Nézet-Séguin’s leadership of the symphony’s opening ‘Ziemlich schnell’ movement with palpable understanding, the string playing, wonderfully reliable throughout the performance, granting the composer’s dense writing a welcome buoyancy. The intelligently-judged balances among the orchestra’s sections that Nézet-Séguin and the musicians achieve provide a setting in which the beauty of Bruckner’s music can be appreciated without longing for this or that phrase to be more or less prominent in the soundscape.

The tempi that Nézet-Séguin sets in the Adagio (‘Feierlich, etwas bewegt’) and Scherzo (marked ‘Schnell’—‘Mäßig schnell’ in some editions—by the composer) movements allow the symphony’s expressive energy to evolve at a cumulative pace that draws the listener’s attention into details of orchestration and phrasing without jeopardizing contemplation of the work’s broader design. In the Adagio, there are no concerns about the capabilities of any of Orchestre Métropolitain’s personnel. This is music of dark moods, but conductor and orchestra refuse to wallow in them, preferring to get on with performing the notes before them rather than indulging in the dangerous business of questioning the artistic impetus of the composer’s instructions instead of merely following them. To say that Nézet-Séguin takes the time to fully ponder the expressive implications of Bruckner’s harmonic progressions is not to suggest that the performance is at all ponderous. There is little true jocularity to mine in playing the Scherzo, but its—no one tell Bruckner!—almost Brahmsian ambivalence is tellingly exposed. A heightened awareness of the novelty of Bruckner’s part writing is facilitated by the robust but flexible orchestral textures that Nézet-Séguin encourages: in the Scherzo’s boldest moments, not only Mahler but Schönberg, Webern, Berg, Schulhoff, and Krenek also appear on the horizon, foreshadowed in music that unmistakably owes a debt of gratitude to Beethoven’s late string quartets.

The symphony’s final movement, designated ‘Mehr schnell’ by the composer, is a sort of cabaletta to the scene and two-part aria that precede it. Here, Nézet-Séguin’s leadership occasionally sounds cautious rather than confident, but a measure of caution is indicative of a commendable drive to conserve emotional electricity and preserve musicality even in the most frenetic passages. If the movement’s raw impact is marginally reduced, the enhanced refinement—a quality not often cited among the principal virtues of Bruckner’s music—that Nézet-Séguin’s approach reveals is ample compensation. In the symphony’s final moments, Orchestre Métropolitain’s greatest assets are deployed. Like their conductor’s endeavors, the musicians’ playing weds youthful exuberance with the assurance of experience. Collectively, they are as attentive to the smiles as to the scowls in Bruckner’s music, and their performance of Symphony No. 2 is convincingly grand on a scale appropriate to the score.

Offered as a bonus to listeners who purchase this release in digital format is an unabashedly Romantic performance of Leopold Stokowski’s elegiac arrangement of Johann Sebastian Bach’s ‘Komm, süßer Tod, komm selge Ruh’ (BWV 478). The flamboyant Stokowski’s orchestration of Bach’s hauntingly beautiful music is surprisingly sensitive, and Nézet-Séguin conducts the piece with complementary intensity and restraint that honor both Bach and Stokowski. With a modern-instrument band like Orchestre Métropolitain and an ensemble of dedicated singers, Nézet-Séguin would likely be an ideal champion of Felix Mendelssohn’s edition of Bach’s Matthäus-Passion.

Waylon Jennings and Willie Nelson are unlikely visitors to a review of a recording of a Bruckner symphony, but the advice of their ‘Mammas, don’t let your babies grow up to be cowboys’ might have served the curmudgeonly Bruckner equally well as an enjoinder to thwart youngsters’ intentions to become composers or conductors. His was a career complicated by critical hostility, some of which he unintentionally instigated, amorous disappointments, and bouts with depression, but the latter-day image of Bruckner desolately perched in his Linz organ loft, a man apart from his surroundings, is likely no more accurate a depiction of his life than accounts of lifelong puerility are of Mozart’s. Symphony No. 2 is neither Bruckner’s best nor his most radical work, but the debate that it has spawned among scholars validates its significance in its composer’s and the wider symphonic canons. Often battered by the musical establishment of which he was a reluctant part, the introverted Bruckner might well have advised an eager young man with Yannick Nézet-Séguin’s gifts to pursue greatness as a doctor, lawyer, or such, but this is a performance of his Symphony No. 2 that would surely have inspired him to press a coin into the conductor’s hand as a humble, heartfelt ‘Vielen Dank.’