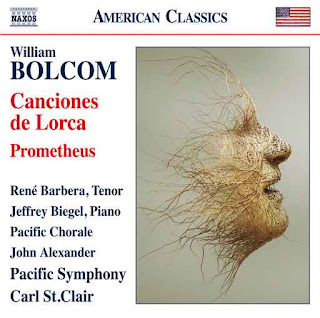 Born in Seattle in 1938, William Bolcom has since studies with mentors of the caliber of George Frederick McKay, John Verrall, Darius Milhaud, and Olivier Messiaen aided him in finding and refining his individual voice been among America’s finest composers, the recipient of both a Pulitzer Prize and a National Medal of Arts. Like Mozart, he has excelled in virtually every musical genre, creating works of beauty and brilliance for recital halls, concert venues, and opera houses and spanning more than a half-century of stylistic innovations, ranging from serialism and Twenty-First-Century post-modernism to unabashedly lyrical tonalism. Bolcom’s mammoth, three-hour setting of William Blake’s Songs of Innocence and of Experience, recorded by NAXOS with an ensemble of talented American singers including the composer’s wife, mezzo-soprano Joan Morris, is in many ways a summation of the composer’s creative ideologies. In their very different veins, so, too, are Canciones de Lorca and Prometheus, both recorded by NAXOS in performance in Costa Mesa, California, and here paired on a most welcome release in the label’s American Classics series. Created under very different circumstances, these works share an ethos anchored by the assertion that, in many aspects of humanity, the impulse to create is far stronger than the will to destroy. Bolcom’s gift for writing for voices, whether individual voices in Lieder or groups of voices in works for the stage, is a vital component of the composer’s own voice, and NAXOS’s recording of poignant, persuasive performances of Canciones de Lorca and Prometheus is a gift to listeners who appreciate Bolcom’s musical ingenuity and the lessons it offers in the art of binding of wounds and healing of scars with song.

Composed for world-famous tenor Plácido Domingo to inaugurate the Renée and Henry Segerstrom Concert Hall in Costa Mesa’s Segerstrom Center for the Arts in 2006, Bolcom’s Canciones de Lorca are precisely what the title suggests: songs utilizing texts by Spanish poet and playwright Federico García Lorca (1898 – 1936). Active during the Guerra Civil, one of the bloodiest and most brutal periods in Spain’s history, and almost certainly executed in 1936 by the Nationalist forces that ultimately ushered the Fascist regime of Francisco Franco into power [the writer’s body was never found, and a recent exhumation yielded no new clues], García Lorca was for the Spaniards whose lives were disrupted or ended by the Civil War what Walt Whitman was to victims of the American Civil War and Wilfred Owen was to the combatants of the Great War: the progenitor of a Zeitgeist for an age that might otherwise be represented in history only by broken, unintelligible voices. A member of the Generación del 27 that suffused the reluctant Spanish literary establishment with elements of the Early-Twentieth-Century modernism already taking hold elsewhere in Europe, García Lorca was consumed by two great loves, for nature and music, and his poetry hypnotically fuses the imagery of the former with the cadences of the latter. Employing idioms that pay homage to García Lorca’s Andalusian heritage, Bolcom’s Canciones invert the lens and, by focusing the light of music on the poet’s words, illuminate the essence of the man who wrote them. Tenor René Barbera is an ideal conduit for this exchange of ideas between García Lorca and Bolcom. Though the music allows Barbera few excursions into the highest reaches that are the greatest glory of the voice, it is difficult to imagine even the esteemed Domingo singing Bolcom’s Canciones as well as the younger tenor sang them in the performances that yielded this recording. Audience coughs are frequently audible during both Canciones de Lorca and Prometheus, but, aside from an unnatural balance in the earlier work that places Barbera slightly too far forward in relation to the generally excellent Pacific Symphony, NAXOS’s engineering provides Bolcom’s music with a flattering ambiance. As heard on this disc, very closely recorded, Barbera’s voice seems larger and darker than it sounds in theatres, but the tonal beauty and sure pitch that characterize his work are much in evidence. In the opening canción, ‘Balanza,’ Barbera’s singing establishes an atmosphere reminiscent of Spain’s troubadour tradition, the vocal line intertwining with the text like a shimmering thread in the orchestral fabric that envelops the subsequent first Interlude, vibrantly played by the Pacific Symphony. Conductor Carl St. Clair shapes Canciones de Lorca with clear-sighted attention to the sonorities of both Bolcom’s music and García Lorca’s words, and he provides Barbera with reliably thoughtful support. The tenor voices ‘La casada infiel,’ ‘Alba,’ and ‘Danza da lúa en Santiago’ resonantly, the strength and focus of his lower register growing more impressive with every phrase. His accounts of ‘Árboles’ and ‘Soneto de la dulce queja’ breathe the same air that wafts through Manuel de Falla’s Noches en los jardines de España, nodding to García Lorca’s close acquaintance with his musical countryman. Entitled ‘A Poet in New York,’ the second Interlude is a character study of the creative personality with a subtly disquieting vein of longing, emphasized by St. Clair’s carefully-controlled but elastic pacing. Barbera’s singing is at its best in the closing canción, ‘El poeta llega a La Habana,’ which he sings with a burnished timbre and brawn that recall the young Domingo. The clarity of Barbera’s diction is a testament not only to the emotional depths of García Lorca’s words but also to the sensitivity of Bolcom’s musical settings of them, as well as to the singer’s own considerable abilities as a communicative artist.

Like nearly all American artists, Bolcom was affected tangibly and intangibly by the terrorist attacks that transpired on 11 September 2011. A tangible result of the events of that fateful day is Prometheus, a work for chorus, piano, and orchestra that owes much to the structural model of Beethoven’s Opus 80 Fantasy in C minor for soloists, chorus, piano, and orchestra. Allying his music with verses by Lord Byron (1788 – 1824), Bolcom created a work that allegorically likens the perpetual renewal of Prometheus for the sole purpose of his unending torment to the cycles of catastrophe and recovery and the cult of violence in modern society. Playing with virtuosic technique and expansive phrasing, the aptly Byronic pianist Jeffrey Biegel soulfully takes the part of Prometheus himself, his emotive traversals of Bolcom’s music engendering a very personal progression of thoughts upon which the chorus and orchestra seem to intrude. Prepared by Artistic Director John Alexander, the Pacific Chorale singers impress almost as much with their parlando delivery of the first section of Byron’s text as with their bold, well-integrated singing of the sections that follow. As in Canciones de Lorca, St. Clair manages the musical personnel under his direction with intelligence and insightfulness that produce a potent performance of Prometheus. The Pacific Symphony musicians throw themselves into their parts, firing volleys of barbed sound that symbolically pierce the tortured body of Prometheus. Biegel’s pianism personifies a metaphorical Prometheus of rugged physicality but a discernibly vulnerable psyche, undone by suffering but expressed with incredible immediacy by the pianist’s handling of Bolcom’s agitated, virulent music. The nuances of Byron’s text, elucidated by the choristers’ pointed singing, find a litany of cleverly-crafted parallels in Bolcom’s score. There are passages, especially in the piece’s final minutes, in which the performers seem to work a bit too hard at emphasizing the message of hope amidst despair that is central to Prometheus, but their involvement is indicative of an encouraging dedication to putting their fingers, instruments, and vocal cords wholly at the service of the composer. There are no adequate compensations or memorials amongst the words and works of men for the lives stolen on 11 September 2001, but Prometheus gives the futile anger, grief, and desperate quest for meaning a purpose beyond acceptance and vengeance. In music like Bolcom’s and in performances like this one, restoring faith in humanity can be accomplished, at least in part, by raising voices in song.

In the fourteen years since the world watched in horror as edifices emblematic of the city that housed them and of human endeavor in the age of glass and steel crumbled beneath the weight of misunderstanding and misplaced zealotry, the definition of community has changed drastically—and perhaps permanently. It is in such times that communities most need great art and great artists, not as distractions but as beacons to light the way to renewed cooperation and coexistence. The awful discord of strife reverberates through Canciones de Lorca and Prometheus, but, like the din of war that penetrates the serene surface of the ‘Agnus Dei’ in Beethoven’s Missa solemnis, it is so that the harmonies of peace might sound all the sweeter. This disc was not needed to prove that William Bolcom is a significant composer, but it is a much-deserved tribute to an artist whose work enshrines the guarded optimism not of one man but of mankind.