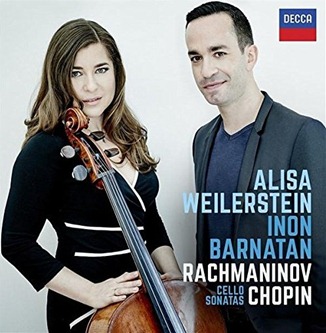 On the heels of a thoughtfully-planned, superbly-produced Deutsche Grammophon recording of the composer's Variations on themes by Arcangelo Corelli and Nicolò Paganini, Universal again honors the artistic legacy of Sergei Rachmaninov with a lovingly-presented DECCA recording of his Opus 19 Sonata for cello and piano and the exquisite Vocalise (Op. 34, No. 14), contrasted by a trio of works in similar veins by Frédéric Chopin. Hearing the music of both composers with this degree of proximity, it is impossible to overlook the extent to which Rachmaninov's part writing was influenced by Chopin's example, and the two geniuses shared a gift for creating melodies that, once heard, never leave the mind. Indeed, the pieces on this disc, played by American cellist Alisa Weilerstein and Tel Aviv-born pianist Inon Barnatan with a level of musical symbiosis that transcends casual partnership, are of that variety of music that lurks in the subconscious like memories waiting to be relived. The spirit of this collaboration is reflected in the music: Chopin had been dead for nearly a quarter-century when Rachmaninov was born, but the older composer's artistic soul might be said to have been resurrected in the work of the younger man. To the extent that composers' souls are enshrined in their music, the spirits of both Chopin and Rachmaninov sing in the selections on this disc, their voices enthrallingly projected by the playing of a pair of exceptionally talented musical communicators.

Completed and premièred with the composer at the piano on 2 December 1901, less than two months after the first performance of his titanic Second Piano Concerto, Rachmaninov's G-minor Sonata for cello and piano—so designated at the composer's urging because of the equality of the music for both instruments in terms of difficulty and importance—is among the composer's most introspective and quietly moving works. Weilerstein and Barnatan begin the opening Lento – Allegro moderato movement with an aura of uncertainly, the shifting harmonies executed with a light touch that conjures an atmosphere not unlike the discord of the opening bars of Beethoven's Ninth Symphony. From that start, however, cellist and pianist progress to a reading of the movement's development that is strangely electric and sensitive. There is nothing quaint about Weilerstein's and Barnatan's playing, and they do not shrink from overtly Romantic expansiveness. The complex patterns shared by the instruments in the Allegro scherzando movement are phrased by the musicians with uncanny synchronicity that never inhibits individuality: naturally, a cello cannot play a passage identically to the way in which it is played on the piano, and Weilerstein and Barnatan complement one another's approaches without engaging in unimaginative mimicry. The interplay of their sharing of thematic material makes the Andante movement a legitimate conversation in music, almost a love duet, and the lyrical eloquence of their playing provides numerous moments of spine-tingling emotional impact. Rachmaninov does not seem to have been a sentimental man, but it is logical to presume that he allowed feelings to which he did not grant words to speak through his compositions. The passions of the concluding Allegro mosso movement are ambiguous, and the unexaggerated sincerity with which Weilerstein and Barnatan convert them into sound heightens the ambivalence. Rachmaninov was no less accomplished in the art of blending instrumental timbres in his chamber music than in his larger-scaled, imaginatively-orchestrated works, and the robust sounds that Weilerstein and Barnatan coax from their instruments often give the impression that far more than two players are at work. The melodic figurations, as sumptuous as they are sensual, are executed by both musicians with keen focus on the organic cadences of the music. This is also true of Weilerstein's and Barnatan's performance of the rhapsodic Vocalise (Op. 34, No. 14), a piece in which cello and piano interact playfully but with galvanizing unity of purpose. As technicians, Weilerstein and Barnatan are unfailingly nimble-fingered, but it is the keen intelligence of their playing of Rachmaninov's music that refuses to relinquish its grasp on the listener's ears and heart.

Composed in 1846 and dedicated to the widely-acclaimed cellist Auguste Franchomme, Chopin's Sonata for cello and piano in G minor (Opus 65), the last of his works to appear in print before his untimely death, is an ideal companion for the Rachmaninov Sonata. The Sonata is one of a handful of surviving works in which Chopin composed for other instruments in combination with piano, and in it his complete understanding of the tonal possibilities of the piano is proved to have extended to the cello. From the first bars of the Allegro moderato movement, there is a wistfulness, familiar from the Nocturnes, that flows through the Sonata, almost a Leitmotiv that unites the movements like a silent melody. To their credit, Weilerstein and Barnatan immerse their playing in Chopin's latent melancholy without wallowing in it. The rhythmic crispness of their playing alleviates the somberness of the music, revealing the glimpses of sunlight that peer through the clouds. In both the Scherzo and its boisterous Trio, the musicians offer playing that exemplifies technical brilliance, but the zenith of their interpretation of Chopin's Sonata is their performance of the Largo movement. Like Mozart and Beethoven, Chopin possessed an extraordinary gift for creating slow movements that remarkably unite emotions of near-operatic intensity with confessional intimacy. In the Sonata's Largo, cellist and pianist leave no expressive path unexplored but maintain absolute control on rhythm and phrasing, allowing the listener to contemplate Chopin's music on its own terms without imposing an idiosyncratic interpretation of their own devising. It is often far bolder to allow a piece to speak its own language than to attempt to translate it, and Weilerstein and Barnatan further disclose the depths of their artistries by sagaciously respecting Chopin's music. The sense of joy in making music that beams from Weilerstein's and Barnatan's playing of the Sonata's Finale is gladdening, and the precision of their performance is enhanced by the insightfulness of their phrasing. Every smile, sigh, and furtive sorrow that inspired Chopin resounds in this reading of his beautifully-crafted Sonata.

Arranged by the dedicatee of the Sonata, Auguste Franchomme, the Étude in C sharp minor (Op. 25, No. 7) is, as played by Weilerstein and Barnatan, a piece that combines virtuosity with vulnerability. Franchomme’s mastery of the cello enabled him to retain the Étude’s unique structure, and his friendship with Chopin surely contributed to the faithfulness of his preservation of its ethos. Weilerstein gives a stirring account of Franchomme’s cello part, and Barnatan matches her every feat of prowess with his own unassailable finesse. The Introduction et Polonaise brillante for piano and cello in C major (Opus 3)​ is among Chopin’s many miniature masterpieces, fully meriting its ‘brillante’ designation. Weilerstein’s and Barnatan’s performance likewise merits the distinction, their shared affection for the music cascading through their playing of the Introduction et Polonaise brillante—as it does through their playing of every piece in this recital.

Listening to this disc again and again, it seems utterly ridiculous that some of Classical Music's most influential advocates perpetuate the falsehood that there are no musicians at work today who are capable of consistently rivaling the performances and interpretations of artists of the past. Boasting of performances by distinguished pairings such as Edmund Kurtz and William Kapell, Zara Nelsova and Artur Balsam, and Sviatoslav Knushevitsky and Lev Oborin, the discography of Rachmaninov’s Sonata for cello and piano, though still an underappreciated work, contains many fine traversals, and the Chopin Sonata has been even more fortunate on records. Still, neither piece has been more blessed in the recording studio than when Alisa Weilerstein and Inon Barnatan met before the microphones in Berlin. Yet again in the long history of recorded sound a DECCA release restores confidence in the integrity of contemporary artists. More fundamentally, this is a ravishing recording of fantastic music.