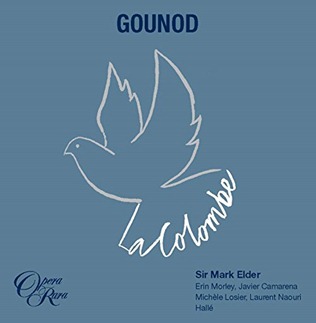 When, six years after it was first performed in Baden-Baden, Charles Gounod’s frothy opéra comique La colombe premièred in Paris in 1866, France was a nation in flux. Napoléon III’s Second Empire was crumbling rapidly, imperial designs in Mexico were unraveling, and a retaliatory invasion of Korean territory was bringing oriental and occidental interests into conflict on an unprecedented scale. It was a time in which jovial evenings at the theatre were surely welcomed by all stations of society. Based upon Jean de la Fontaine’s poem Le faucon, Jules Barbier’s and Michel Carré’s libretto for La colombe infused the Opéra Comique with a spirit of guarded jocularity that twinkled in the sunny glow of Gounod’s score. Missing from La colombe are the grandeur and religiosity of Faust, the unapologetic Romantic excess of Roméo et Juliette, and even the wistful charm of Mireille, but Gounod’s little dove wields a singular allure all of her own. Gounod is a composer in descriptions of whom mentions of his consummate theatrical sensibilities are often laced with pejorative connotations, his skill for writing effectively for the stage inexplicably interpreted as a superiority of invention over inspiration, but the enduring popularity of Gounod's operas when those of many of his contemporaries have disappeared into the footnotes of books no one reads reflects the appeal that the music has exerted on the public for the past 150 years. A 1947 French Radio performance with an idiomatic cast including Janine Micheau as Sylvie offered glimpses of La colombe’s beautiful musical plumage, but Opera Rara’s studio recording of the opera, expertly engineered by Jonathan Stokes and Neil Hutchinson for Classic Sound and presented with documentation by Hugh Macdonald that is wholly worthy of the label's legacy, frees Gounod's score from its gilded cage and allows it to soar into the Twenty-First Century on wings of restored radiance.

It is not surprising for an Opera Rara release to provide listeners with opportunities to savor little-known scores as their composers intended them to be performed, but even among the treasures in the label’s discography this recording of La colombe is especially valuable. French coach Nicole Tibbels earns gratitude for facilitating a performance in which, in speech and song, the American leading lady and Mexican leading man are virtually indistinguishable from their native Québécoise and French colleagues. From the first notes of the Introduction, the authentic Gallic atmosphere is perpetuated by the Hallé’s playing and Sir Mark Elder’s conducting. Whether performing music by Gounod, Wagner, or Elgar, Elder and the Hallé musicians consistently combine British discernment and discipline with idiomatic mastery of the music at hand. In La colombe, Elder paces Gounod’s score with attention to detail that does not distract him from the carefully-constructed architecture of the opera as a whole. The challenges of Gounod’s score are met with virtuosic confidence by the Hallé players, the joie de vivre that streams through the music cascading through every bar of this performance. The orchestra’s playing credibly relocates the performance from Peter Street to Place Boieldieu.

As sung by Québécoise mezzo-soprano Michèle Losier, a more beguiling start to Act One than Mazet’s romance ‘Apaisez, blanche colombe’ is unimaginable. Possessing a voice of a type ever in short supply, ideal for rôles like Siebel in Gounod’s Faust—also a collaboration with Barbier and Carré—that demand both a measure of thrust and lightness of approach, Losier sings the romance enchantingly, her perfect placement of nasalized vowels proving that the correct production of these sounds does not require unattractive distortion of the tone. Losier makes no concerted efforts at sounding masculine, which is to the good as her timbre is so lovely. In Mazet's trio with Horace and Maître Jean that follows, ‘Qu’il garde son argent,’ Losier is joined by tenor Javier Camarena and bass-baritone Laurent Naouri. Singing Horace, Camarena displays every quality that contributed to his Metropolitan Opera début being one of the most memorable in recent seasons. Gounod’s music does not make the kinds of demands that rôles like Don Ramiro in Rossini’s La Cenerentola and Tonio in Donizetti’s La fille du régiment inflict upon him, but Camarena here voices Horace’s top B♭s in the trio as impressively as he has delivered the top Cs in Tonio’s ‘Pour mon âme, quel destin!’ Though this is not music that provides Camarena with fodder for his bravura technique, his comfort with the high tessitura is marvelous: not since the primes of Nicolai Gedda and Alain Vanzo has music like Horace’s been sung so capably and without strain. After dispatching his lines in the trio with gusto, Naouri, one of France’s finest singers, raucously vents his character’s frustrations in Maître Jean’s ariette, ‘Les amoreux.’ Accomplished in a wide repertory, Naouri knows his way round Gounod’s style, emoting with the glee of a child following a beloved secret path. Naouri’s sustained tones are sometimes slightly unsteady, but his intonation is largely unerring. Moreover, he finds in Maître Jean a part that might have been written for him. The vibrant air ‘Je veux interroger ce jeune homme et connaître’ introduces Sylvie, and in singing it soprano Erin Morley proclaims, ‘Alright, I am here: laissez les bons temps rouler!’ As she has been an admired Olympia in Offenbach’s Les contes d’Hoffmann at the MET, the security of her top C♯s and D♯s is not unexpected, but the elation that she conveys in singing the sopracuti is remarkable. Morley has also been a Rhinemaiden in Das Rheingold and Götterdämmerung and an aptly high-flying Waldvogel in Siegfried at the MET, so hers is not a standard-issue leggiero voice without a firm core. In her performance of the air, her energy is matched by imagination. Losier returns with a galvanizing account of Mazet’s couplets, ‘Ah! les femmes! les femmes!’ The Fs and Gs at the top of the stave hold no terrors for her, and she copes with equal aplomb with the trills and top B♭. Morley's top B♭ is tested in Sylvie’s terzetto with Mazet and Horace, ‘Ô vision enchanteresse,’ and the soprano passes the test without resorting to cheating, musically or dramatically. Joined by Naouri for the quatuor that ends Act One, ‘Ô douce joie,’ the singers deliver their lines exuberantly, Morley tossing off Sylvie’s top D uninhibitedly.

Elder and the Hallé set the stage for Act Two with an ebullient performance of the Entr’acte, revealing every detail of the cleverness of Gounod’s part-writing. Though he excels equally in comic and dramatic rôles, Maître Jean’s air ‘Le grand art de cuisine’ is clearly home territory for Naouri. The wit and humor that emanate from his singing of the aria are charming, and Naouri’s vocalism is here at its strongest. Losier and Camarena make Mazet’s and Horace’s duo ‘Il faut d’abord dresser la table’ a highlight of the performance, the shimmer of Losier’s singing complemented by Camarena’s effortless top B. Sylvie’s romance ‘Que de rêves charmants emportés sans retour!’ is sung by Morley with boundless enthusiasm tempered by an intuitive grasp of the contours of Gounod’s melodies. Splendid as her top notes are, the resonant middle octave of the soprano’s voice is particularly advantageous, and the thoughtfulness with which she uses text as the springboard that propels her characterization of Sylvie is inspiriting. An unencumbered flow of attractive, graceful tone is the hallmark of Camarena’s singing of Horace’s madrigal, ‘Ces attraits que chacun admire.’ Despite a few vowels that betray his Latino heritage, Camarena is as convincing a Francophone hero as Michel Sénéchal, and he brings precisely the proper vocal weight to Gounod’s dulcet but not anemic vocal lines. The sparkling quartettino ‘Déjà son cœur semble tout bas souscrire a tous mes vœux!’ receives expert handling from each member of the cast, Naouri anchoring the ensemble with vocal solidity, Losier’s quicksilver inflections glistening, Camarena portraying the love-wearied idealist with poise, and Morley delivering the top line with real distinction. Soprano and tenor interweave their voices like the finest chocolate and Breton caramel in ‘Hélas, seigneur, pardonnez-moi si j’ose vous demader l’unique chose,’ Sylvie’s and Horace’s duo, making the number the opera’s emotional climax. Spared the draconian dénouement of de la Fontaine’s poem, the curtain falls on La colombe to the strains of ‘Apaisez, blanche colombe,’ in this performance of which the fine soloists rise to the occasion of Gounod’s celebratory music with compelling bravado. Like the dove sailing into the heavens, Morley ascends to the heights to which Sylvie’s coloratura transports her with imperturbable elegance and the sound of a smile in the voice that listeners cannot help replicating on their faces, just as Gounod, Barbier, and Carré surely intended.

Paris at the time of the Opéra-Comique première of La colombe was a city in transition, clasping modernity with hands still stained with the blood of the Revolution and Terror. Whether in 1789, on the eve of occupation in World War II, as gunmen took aim at the artists of Charlie Hebdo, or in the wake of terrorist attacks that indiscriminately took lives in cafés and concert hall, Paris is ever a work in progress, somewhere between revitalization and reinvention. La colombe is set in Florence, but there is no doubt that the eternal ethos of Paris infuses every page of Gounod’s score. Opera Rara’s La colombe is what every opera recording should aspire to be: a performance that explores every nuance of the composer’s score and the librettists’ text with appropriate style and musicality. Like a rainbow after a ferocious storm, this perfectly-timed, frolicsome La colombe embodies Emily Dickinson’s familiar conceit: hope is indeed the thing with feathers.