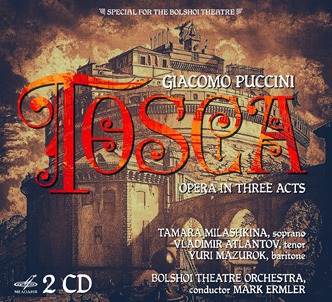 Who needs another Tosca? This is perhaps an indelicate question to pose when one has in one's hand precisely that, in this case Melodiya's compact disc reissue of the 1974 Bolshoi recording of the opera with a fine cast of admired Soviet singers, but the profusion and continuous availability of excellent recorded performances of Tosca make the inquiry inevitable. From several important perspectives, this Tosca is a denizen of what Ivor Novello termed 'the Land of Might-Have-Been.' There are enough successful components to make this a Tosca that might have been one of the opera's finest recorded outings, but enjoyment of the performance is ultimately marred by distracting flaws. Nevertheless, as the cliché goes, this is a Tosca that anyone who appreciates the score would be delighted to encounter in any of the world's major opera houses today.

From a technological perspective, Melodiya's remastering does little to remedy or even disguise the deficiencies of Soviet-era recordings. Indeed, this may be the most unrelenting, loudest Tosca on compact disc: every semiquaver of Puccini's score is blasted merrily by the singers and players of the Bolshoi Theatre Chorus and Orchestra and captured in sonics characterized by rudimentary balances and a wearying preponderance of full-throttle dynamics. There are laudable lacks of peaking and distortion, however. The recording often gives the impression of hearing the score performed in concert, with the orchestra and chorus positioned to the rear of the soloists. On the whole, the Bolshoi choral and orchestral forces acquit themselves admirably, though the decidedly bizarre 'bells' that sound before the singing of the celebratory 'Te Deum' belong in Boris Godunov, not Tosca. Not surprisingly, Italian diction is inconsistent throughout the cast, but there are few moments of true failure. Even without a firm grasp of Puccini’s style, there are moments, sadly too fleeting, in which the performance catches fire. One of the recording's greatest virtues is the conducting of Mark Ermler. A stalwart of the Bolshoi, Ermler was a conductor who bothered to learn scores rather than conducting them solely based upon absorbed traditions. His pacing of Tosca often seems idiosyncratically slow, but the clarity granted to many felicities of Puccini’s orchestrations must be credited to the conductor’s tempi. Like the best conductors of opera, Ermler audibly endeavors to support the singers without shortchanging momentum, and the high quality of his many recordings of Russian repertory suggest that, had his cast been more responsive to his good intentions, he might have presided over an unconventional but wholly satisfactory Tosca.

In supporting rôles, basses Valeri Yaroslavtsev and Vitali Nartov are effective as Angelotti and the Sagrestano despite sounding as though Puccini might have been better served had they switched parts. Scarpia’s scaly agents Spoletta and Sciarrone are capably but forgettably portrayed by tenor Andrei Sokolov, no Piero De Palma, and bass Vladimir Filippov. Mikhail Shkaptsov is cavernous in the Carceriere’s few lines as only a bass trained in the Russian tradition can be, and young Alexander Pavlov, billed by Melodiya in Russian and English as an alto and in French as a boy soprano [similarly, Nartov is a baritone in Russian and English but a bass in French], sings the Pastore’s melancholic canzone at the start of Act Three charmingly.

Among the trio of principals, Polish-born baritone Yuri Mazurok gives the strongest performance. In fact, this lauded exponent of the title rôle in Tchaikovsky's Yevgeny Onegin proves to be a world-class Scarpia who actually sings his music even at full volume, something that could seldom be said of more widely-lauded Scarpias like Anselmo Colzani and Cornell MacNeil. In Scarpia's entrance in Act One, Mazurok produces a wall of sound that rivals the structural integrity of the church into which his Scarpia maleficently saunters. Joining the chorus at the climax of the ‘Te Deum,’ Mazurok hurls out notes at the top of the range with absolute security. His singing of Scarpia’s so-called ‘Credo’ in Act Two, ‘Ha più forte sapore la conquista violenta,’ sizzles with pent-up sexuality, and the slimy directness of his ‘Già, mi dicon venal’ makes the skin crawl: iron-willed would be the Tosca who did not search her surroundings for a suitably injurious weapon in response to such sentiments! Alas, Mazurok’s Scarpia cannot die as impressively as he has lived. Mazurok takes his cue from the gasping, snarling breed of Scarpias, expiring far more noisily than is necessary. Mazurok’s performance is far from the last word in Italianate stylishness, but he dominates this recording as a forceful, robustly-sung Scarpia.

Vladimir Atlantov's solid upper register and stentorian manner of singing qualified him as a sort of Russian Mario del Monaco. Like his Italian colleague, he was capable of nuanced, expressive singing, but there is nothing subtle about his Cavaradossi in this performance. When this Cavaradossi converses with the Sagrestano in Act One, it is with the imperiousness of an arrogant man about town who expects his whims to be indulged. The voice is a burly, handsome instrument, and the top B♭ in 'Recondita armonia' is a predictably clarion tone, but there is little sense of involvement in Atlantov's singing. He sings powerfully in the duet with Tosca in Act One, but his Cavaradossi sounds more likely to be engaged in barroom brawls than found painting the Maddalena in a church. His upper register provides the excitement that his singing generally lacks. The tenor's restraint when his character is under torture in Act Two is welcome, but his exasperation upon discovering Tosca's betrayal and jubilant cry of defiance are dramatically inert when voiced with the same bawling tone unleashed in all of his music, his galvanizing top A♯ notwithstanding. Atlantov sings 'E lucevan le stelle' resonantly, but here, too, his performance is defined by brute strength instead of poetic wonder. There is more tenderness in his singing in 'O dolci mani' than in the duet with Tosca in Act One: finally, there are glimpses of the artistic sensitivity that lends Cavaradossi credibility as more than merely a carnal companion for Tosca. Were Atlantov's Cavaradossi not so rousingly sung, it would perhaps be too little, too late, but his lackluster characterization is substantially redeemed by the quality of the tenor's vocalism.

The Tosca of Tamara Milashkina might easily be underrated or even ill-informedly dismissed. Like Mazurok, the soprano was a frequent visitor to Yevgeny Onegin, but her credentials in Italian opera, though extensive, are not so familiar. Vocally, Tosca's music is well within the boundaries of Milashkina's abilities, and there are aspects of the rôle—not least the three top Cs requested by Puccini—that she brings off as well as the best Toscas on disc. Idiomatic Italian vowels were not hers to command, but her enunciation is no more off-putting than those of many English- and German-speaking Toscas. Milashkina sings Tosca's duet with Cavaradossi in Act One with considerable aplomb, but there is little in her performance to indicate that she is partnering her husband in one of opera's most sensual exchanges. Rather than seeking vestiges of their own marriage in the scene, Atlantov shouts, Milashkina pouts, and the drama rattles on with almost no charisma or personality. Still, there is much to be admired in the reliability of the soprano's singing. There is animation in her traversal of Tosca's confrontation with Scarpia in the church, and she garners appreciation for her eschewal of the often-embarrassing blubbering into which many Toscas dissolve after swallowing the bait of Scarpia's suggestion that Cavaradossi and Marchesa Attavanti are lovers. In Act Two, Milashkina nails the difficult top Cs in the off-stage cantata, here sounding only slightly recessed, and the frenzied outburst after Cavaradossi realizes that she has betrayed Angelotti in order to spare her ungrateful paramour further torture. She possesses sufficient solidity of technical footing to give the top B♭ in 'Vissa d'arte, vissi d'amore' the dulcet treatment that Puccini sought, and her focused, capably-phrased account of the aria wants only a measure of tenderness. Mazurok's Scarpia is a lecher who seems too wily to die, but Milashkina's Tosca dispatches him handily enough; indeed, somewhat matter-of-factly. She goes about the mechanics of posing his body with the crucifix with the calmness of a housewife arranging her laundry. Reunited with Cavaradossi in Act Three, this Tosca seems eager to recount her slaughter of Scarpia, the final top C thrust into the listener's ear as a symbolic recreation of the knife piercing Scarpia's body. Milashkina clearly relishes the melodrama of the opera's final minutes, her breathless utterances delivered with gusto. This Tosca's demise is less impactful than it ought to be, but there is no denying the appeal of the brilliant top B♭ with which the soprano takes her leave. In a setting more congenial to dramatic endeavors, Milashkina might have been a near-ideal Tosca [in a studio recording made a decade earlier, sung in Russian and with Zurab Andzhaparidzye as her Cavaradossi, she was indeed a considerably more engaging presence], her voice more suited by nature for the rôle than that of her countrywoman Galina Vishnevskaya, a celebrated Tosca. In this performance, Milashkina rarely portrays a three-dimensional character, but her singing is often wonderful.

Puccini with a Russian accent is no one’s ideal, especially in an opera as quintessentially Italian of temperament and musical construction as Tosca, but listeners inclined to accept Yevgeny Onegin and Pikovaya dama in Italian in order to enjoy the sublime Tatyana of Rosanna Carteri and Liza of Leyla Gencer can hardly reject a persuasive Tosca sung in Russian-tinted Italian. Ultimately, this is not a consistently persuasive Tosca, but Tamara Milashkina is a Tosca who persuades that another Tosca may not be needed but is always welcome.