It is not solely owing to its association with the consort of King George III that Charlotte is known as the Queen City. In past seasons, ladies wielding vocal crowns—ladies like Lisa Daltirus and Denyce Graves, Leonora and Azucena in the 2011 production of Verdi’s Il trovatore, Brenda Harris, Abigaille in 2014’s Nabucco, and Othalie Graham and Dina Kuznetsova, the eponymous Princess and Liù in 2015’s Turandot—have lent Charlotte’s regal epithet an added layer of meaning. Thanks to the endeavors of these artists and their colleagues at Opera Carolina, Charlotte is gloriously enthroned as the Queen City of opera in the southeastern United States. Opera Carolina’s reign as one of America’s most enterprising and musically-accomplished regional companies will be further secured with a new season that brings Charlotte audiences both pillars of the international repertory and the local première of a masterful score still too infrequently performed.

James Meena, Opera Carolina’s General Director and Principal Conductor, the Opera Carolina Orchestra, and a lineup of fantastic singers from Opera Carolina’s roster launch the company’s 2015 – 2016 Season at 7:30 PM on 3 October 2015, with Art • Poetry • Music – a Gala Benefit Concert, highlighting both the company’s impeccable musical standards and Maestro Meena’s status as one of America’s artistic treasures.

Later in October, Meena and a world-class cast take on Ludwig van Beethoven’s sole opera, the profound paean to conjugal devotion Fidelio. With performances scheduled for 8:00 PM on 17 October 8:00 PM, 7:30 PM on 22 October 7:30 PM, and 2:00 PM on 25 October, Charlotteans have three opportunities to hear Meena’s red-blooded but poetic pacing of Beethoven’s splendidly-crafted score, one over which the composer toiled for years until producing the masterpiece that wrings the hearts of listeners today. In the title rôle of Leonore, the paragon of spousal fidelity disguised as Fidelio in order to infiltrate the prison where her husband is unjustly incarcerated, Opera Carolina introduces local audiences to the beautiful voice of Mexican soprano Maria Katzarava, 2008 winner of Plácido Domingo’s Operalia competition and a student of the legendary Mirella Freni. Florestan, the husband she is determined to free from political bondage, is sung by versatile tenor Andrew Richards, whose accolades to date include first prizes in both the Enrico Caruso Competition and the prestigious Liederkranz Vocal Competition. The young lovers Marzelline and Jaquino are portrayed by soprano Raquel Suarez Groen and tenor Brian Arreola, whose singing as Ismaele contributed significantly to the success of Opera Carolina’s 2014 Nabucco and who also lends his talents to Art • Poetry • Music.  A pair of accomplished low-voiced gentlemen anchor Fidelio: bass Andrew Funk interprets Rocco, the kind-hearted jailer, and baritone Kyle Pfortmiller voices Don Pizarro, the tyrannical prison governor. 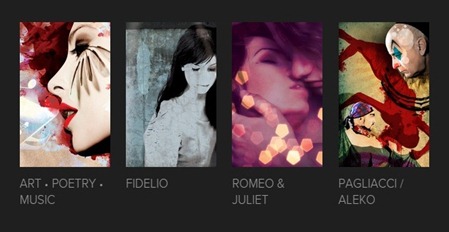 The cold January air will be set ablaze by Opera Carolina’s performances of Charles Gounod’s Roméo et Juliette, presented in a co-production shared by Opera Carolina and Virginia Opera. [Performances in Virginia Opera’s Norfolk, Fairfax, and Richmond venues follow in February.] Meena again presides from the podium, returning to the French repertory of which he proved himself a master in Opera Carolina’s 2008 production of Gounod’s Faust. Shakespeare’s ‘star-crossed lovers’ are brought to life by tenor Jonathan Boyd, a much-admired Alfredo in La traviata for Opera Carolina, and Canadian soprano Marie-Eve Munger, acclaimed both on the stage and in competitions. Roméo’s page Stéphano is impersonated by velvet-voiced mezzo-soprano Kimberly Sogioka, and bass Kevin Langan, heartbreaking as Timur in Opera Carolina’s Turandot, is the benevolent Frère Laurent. Young baritone Efraín Solís unleashes his sinewy voice and soulful presence as Roméo’s plague-uttering friend Mercutio. Brian Arreola returns as the treacherous Tybalt, and Juliette’s nurse Gertrude is sung by mezzo-soprano Susan Nicely, who was riotous as the Marquise de Birkenfeld in Greensboro Opera’s January 2015  production of Donizetti’s La fille du régiment. Performances are scheduled for for 2:00 PM on 24 January, 7:30 PM on 28 January, and 8:00 PM on 30 January.

The greatest novelty of Opera Carolina’s 2015 – 2016 Season is the April double-bill of Ruggero Leoncavallo’s perennially-popular Pagliacci and Sergei Rachmaninoff’s underappreciated Aleko. Leoncavallo’s tale of adultery and murder in a traveling Commedia dell’arte troupe needs no introduction, but Rachmaninoff’s exhilarating examination of similar themes in the context of a gypsy community into which an outsider has been accepted enjoys far less familiarity among American audiences than it deserves. Opera Carolina’s performances, scheduled for 2:00 PM on 10 April, 7:30 PM on 14 April, and 8:00 PM on 16 April, will tellingly examine the relationships between the two dramas by featuring outstanding singing actors who take central rôles in both operas. Under the baton of conductor Xu Zhong, Canio in Pagliacci, one of the most demanding parts in the tenor repertory, is entrusted to Jeff Gwaltney, a lauded veteran of both Washington National Opera’s Domingo-Cafritz Young Artists program and Glimmerglass Festival’s similar initiative. The imagination of gorgeous soprano Elizabeth Caballero takes flight as the unfaithful wives Nedda in Pagliacci and Zemfira in Aleko. Young baritone Alexey Lavrov, a native of the Komi Republic in northwestern Russian, a region with a population smaller than that of metropolitan Charlotte, sings Silvio in Pagliacci and the title rôle in Aleko, and dashing tenor Joshua Stewart, heard in October in Art • Poetry • Music, portrays Leoncavallo’s Beppe and Rachmaninoff’s Young Gypsy.

Shakespeare famously wrote in A Midsummer Night’s Dream that ‘the course of true love never did run smooth,’ and the operas in Opera Carolina’s 2015 – 2016 Season, exploring unassailable devotion, ill-fated clandestine passions, deadly jealousy, and life-shattering betrayal, offer fascinating glimpses of that twisting, confounding course. Shakespeare also wrote, in Antony and Cleopatra, ‘Give me some music; music, moody food of us that trade in love.’ In its presentation of that ‘moody food,’ prepared by some of the genre’s most gifted musical chefs, Opera Carolina’s 2015 – 2016 Season is a feast fit for a true gourmet.

To learn more about Opera Carolina’s 2015 – 2016 Season, please visit the company’s website. Tickets and subscriptions can be purchased online or by phoning the Box Office at 704.372.1000.

All casting is subject to change without notice. Graphics © by Opera Carolina; all rights reserved.