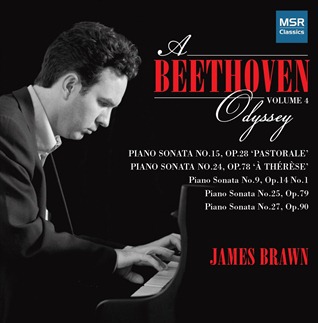 Henry James wrote in The Portrait of a Lady that ‘there are moments in life when even Beethoven has nothing to say to us. We must admit, however, that they are our worst moments.’ For all his sagacity in insightfully describing the human condition in all of its social manifestations, James cannot have been right in this. No, it is especially in the worst moments of life that Beethoven speaks most profoundly. So it must have been for the composer himself, the starkest moments of his worsening deafness enlivened by the discourse of some of his most poignant and torturously-written music. In that regard, Beethoven’s thirty-two piano sonatas, composed between 1795 and 1822, constitute a near-comprehensive conversation among this creative genius, generations of interpreters, and listeners with every imaginable prejudice. Both in recital and in recording studios, many pianists have essayed traversals of the complete cycle of sonatas, but few of them have exhibited connection with the music to rival James Brawn's submersion in the music over the course of his Beethoven Odyssey. Like Ulysses's epic journey of Antiquity recounted by Homer, Brawn's odyssey through Beethoven's sonatas is not a trek from a clearly-defined start to a distinct terminus but a microcosmic exploration of the intricacies of individual and collective humanities. Playing a splendidly even-toned Steinway and Sons instrument prepared by Ulrich Gerhartz and tuned by Graham Cooke and Peter Law, Brawn delights in the unique character of each of the five sonatas on this disc while also securing the ties of stylistic kinship that unite them. Just as even the greatest journey begins with a single step, Beethoven's most extravagant sonic landscapes are painted with simple notes. In the performances on this disc, Brawn gives every note its due: in these vistas, the pebbles are rightly as significant as the peaks.

Composed in 1798 – 99, Sonata No. 9 in E major is a work in which the Viennese Classicism of Haydn and Mozart is fused with the proto-Romanticism of Beethoven's early mature style. Haydn's formality and Mozart's playfulness can still be heard, but the young Beethoven, not quite thirty years old, infused the Classical poise of his predecessors with the vehemence and volatility of his own artistic temperament in order to fashion a style both steeped in tradition and wholly original. In the opening Allegro movement, played by Brawn with rhythmic bounce that makes the magnificent instrument beneath his touch sound like an impeccably-preserved period fortepiano, the taut flesh of the music is becomingly attired in jewels of sound. Throughout the performances on this disc, Brawn's fingering and phrasing are exemplary, his articulations of Beethoven's ornaments wholly natural, but it is the unbridled joviality of his playing of the Allegretto and Maggiore second movement that captures the imagination. Here and in the Rondo (Allegro comodo) that ends the sonata, Beethoven and Brawn smile delightfully, the uncomplicated joy of the composer's creativity dancing from the tips of the pianist's fingers.

The vernal zephyr that flutters through the pages of the 1801 Sonata No.15 in D major, nicknamed the 'Pastorale,' perfumes the music with fragrances of dew-kissed blossoms and new grass. Brawn evokes scenes of bucolic freedom in his handsomely-conceived playing of the introductory Allegro, complemented by the Arcadian freshness of his delivery of the wistful Andante. It is unusual for the links among movements to be as apparent without exaggeration as Brawn makes them on this disc. Not only thematic material but also emotional links are examined and explicated, the voices of one movement found within the countersubjects of its brethren. The Scherzo (Allegro vivace) and Trio are joyously handled by Brawn, rhythmic contrasts put to subtle dramatic use. In the sonata's final movement, the Rondo (Allegro ma non troppo) – Più allegro quasi Presto, the pianist interprets Beethoven's tempi very faithfully, finding the impetus for the exuberant transitions within the music itself. As in Sonata No. 9, Brawn discerns and communicates both the unique qualities of the music at hand as well as the elements of the place that the sonata occupies within the context of the progress of Beethoven's artistic evolution. This, of course, can only be achieved when a pianist is as masterful a technician as Brawn unfailingly proves to be.

Sonata No. 24 in F-sharp major, a product of 1809 known as 'À Thérèse' owing to its dedication to Countess Thérèse von Brunswick, is a concentrated font of expressivity as remarkable in its smaller-scaled way as Fidelio, the Missa solemnis, and the late string quartets. Here, the poet in Brawn finds an eloquent outlet. The singing quality of his rendering of the Adagio cantabile - Allegro ma non troppo is exquisite, his shaping of the melodic line as alluringly expansive as Callas's singing of Norma's 'Casta diva.' It is apparent when hearing the fluidity of Brawn's playing that he has absorbed the lessons of great interpreters of the past, pianists such as Schnabel, Brendel, and the recently-departed Moravec, but has come to Beethoven's sonatas without prejudices or preconceptions. Indeed, compared with a century of recorded Beethoven interpretations, Brawn's readings on this disc synthesize qualities that recall the most noble performances of past generations but are very much his own. The scintillating individuality of his execution of the vibrant melodic figurations of the Allegro vivace engenders a marriage of tempo and technique that, like Karl Böhm's conducting of Fidelio, defies easy explanation: it simply sounds right for the music.

The untroubled—which, from the perspective of the prospective performer, is not to say undemanding!—brilliance of Sonata No. 25 in G major, dating from 1809, coruscates in the glow of Brawn's playing. The pseudo-Teutonic strains of the Presto alla tedesca benefit terrifically from the sprightliness of the pianist's bass line, his left hand providing the solid foundation upon which an opulent edifice is built. The difficult divisions are dispatched with unassailable virtuosity, Brawn's fingers and wrists equal to every challenge the wily Beethoven devised. The subtleties of the Andante are highlighted by the nuanced treatment that they prompt from Brawn, and his skill at optimizing the piano's resonance with thoughtful use of the pedals should be studied by all pianists who aspire to performing this repertory. Only in the Vivace is there a momentary lapse in Brawn's cumulative excellence: the ambiguities of the music are muted by an avoidance of extremes. The musicality is predictably admirable, but the music's cutting edge is blunted by the middle-of-the-road approach.

Dating from 1814, the two-movement Sonata No. 27 in E minor is the most progressive of the sonatas on this disc: indeed, in certain passages the piano music of Schumann and Brahms seems very close at hand. Brawn follows Beethoven's meticulous instructions to the letter but, like the most imaginative artists, derives interpretive liberation from the composer's parameters. His scrutiny of the first movement, prefaced by Beethoven with the stipulations 'Mit Lebhaftigkeit und durchaus mit Empfindung und Ausdruck,' imparts a notion of restlessness in the music, the perfect coordination between his hands permitting the listener to appreciate how greatly Beethoven utilized the interplay of melody and harmony to enhance the sentiments he sought to elucidate. The second movement, marked 'Nicht zu geschwind und sehr singbar vorzutragen​,' pulses with life in Brawn's hands. The cascades of melody flow over the keys and saturate the charged atmosphere conjured by the music. The small details of Brawn's playing never threaten to shift focus away from the broad structure of the sonata as a whole, but he succeeds as few pianists have managed to do on records at making every bar an intriguing world of its own.

There are more recordings of Beethoven's piano sonatas than most listeners will ever have time to hear. Nearly two centuries after the publication of the master's final effort in the genre, the sonatas individually and en masse appeal to pianists of all ages, breadths of insight, and levels of ability. To the earnest young pianist, there is an euphoria in successfully performing a Beethoven sonata that is surely something like summiting Everest or hiking the Appalachian Trail end to end. More than almost any others known to this listener, the performances on this installment in James Brawn's Beethoven Odyssey exude this elation. There are numerous recordings of artfully-played, intuitively-interpreted accounts of Beethoven's sonatas, but few discs invite the listener into the processes of discovery and discussion as palpably as does this one. The odyssey is not solely shared between Beethoven and Brawn: every listener, too, is invited to learn, luxuriate, and love.