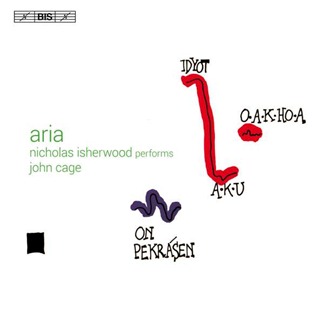 The death of John Cage in 1992 not only silenced the singular voice of one of America’s most inventive composers but also deprived the world of one of the most unique creative personalities of the Twentieth Century. It is, by admission of even the most zealous advocates of the composer's work, a voice that will perhaps always be an acquired taste for many listeners most familiar with traditional veins of Classical Music but one that fairly demands to be acquired. Born in Los Angeles in 1912, Cage studied in his youth with fellow Californian Henry Cowell, Arnold Schönberg, and Lazare Lévy, all of whom influenced his artistic development, the latter by introducing him to the music of Twentieth-Century composers like and also fostering an acquaintance with the work of Johann Sebastian Bach, and spurred the boundless imagination that engendered Cage’s striking originality. Like many of his countrymen, it was a stint in Europe that kindled the composer’s lasting appreciation of the artistic heritage of the United States, a heritage to which he was to contribute indelibly in a career extending over six decades. Though having been active as a composer at least since 1932, it was his creation of 4’33” in 1952 that revealed the full panoply of Cage’s artistry, a spectrum that included colorful works for voice. Spanning more than forty years of compositional output, the selections on Aria afford an exceptionally rich view of Cage's development as a composer. More than two decades after his death, his music retains an uncanny ability to challenge the listener. The performances by bass-baritone Nicholas Isherwood on this disc also challenge, not in the sense of being unpleasant but with a spirit of uncompromising dedication to the ethos of Cage's ingenuity. This is a disc that takes no prisoners and makes no apologies for music that unravels the threads woven by Schubert, Mahler, and Berg and reassembles them with patterns and textures that transform and redefine the parameters of writing for the human voice.

Composed in 1958 and performed by Isherwood using a recent realization by Gianluca Verlingieri of the optional underlying Fontana mix tape, the title track, Aria, benefits as does every selection on the disc from the superb sonic balance achieved by producer and sound engineer Stefan Tiedje. Isherwood's vocalism deserves nothing less. A treatment of vowels and consonants taken from Armenian, English, French, Italian, and Russian, Aria epitomizes Cage's approach to facilitating unconventional but effective, even deeply touching veins of expression via manipulations of the capabilities of the voice. In the composer's musical language and Isherwood's interpretations of it, the voice is confirmed to be the most startlingly versatile of instruments. Hearing Isherwood's performance, it is hardly surprising that Aria was written for Cathy Berberian, a tireless proponent of new music whose technical expertise encompassed four centuries of vocal repertory with unerring stylistic acuity. The sounds of the children's toys employed to hypnotic effect in this account would have delighted the quixotic Berberian, who would also have recognized in the bass-baritone's sonorous, sinewy singing the work of a kindred spirit.

Likely composed in late 1942 and early 1943, A Chant with Claps was crafted for ethnomusicologist Sidney Robertson Cowell, who by marrying Cage's predominantly gay teacher Henry Cowell became a textbook example of a 'beard.' Regardless of that fact, A Chant with Claps—the latter delivered by Isherwood with the rhythmic élan of the musical component of a rural religious revival meeting—is one of Cage's most straightforward, unambiguous works. Here, it is a paean to the unfettered enjoyment of creativity, Isherwood's voice soaring and grumbling as required. Celebration of the liberation of individuality is also at the core of Isherwood's performance of the 1985 piece Sonnekus2, its text derived from the Biblical Book of Genesis​. Isherwood's voice throbs with the pain of isolation, alleviated by the burgeoning joy of creation as a peculiar sort of companionship. Whether enunciating poetic texts or emitting primal sounds, the flinty solidity of his tone is matched by the stark simplicity of his diction. His is emoting that permits no artifice or foolishness.

Eight Whiskus of 1984 is an octet of mesostics mined from 'whistlin is did,' the first three words of a text by Chris Mann​. In this piece, Isherwood manages to make Cage's highly contrived method of expression sound not only efficacious but appealingly natural, as well. He accomplishes this by eschewing histrionics and allowing the voice to convey the intersecting strands of meaning. Each successive part is shaped by the singer like a variation on a common theme, lending the work both variety and continuity and unifying the disparate elements into a molecular structure of cogent musical impact.

Drafted in 1950, the wordless 'A Flower,' the first of the Three Songs for Voice and Closed Piano, receives from Isherwood a performance that revels in the bizarre humanity of its ornithological atmosphere, his voice intoning the birdsong with childlike innocence that belies the darkness of his timbre. Both 1942's 'The Wonderful Widow of Eighteen Springs' and 'Nowth Upon Nacht,' written in 1984 in response to Berberian's untimely death, are settings of words extracted from James Joyce's Finnegan's Wake. Both are powerful songs, insightfully managed by Isherwood, but the stinging bitterness of 'Nowth Upon Nacht' lunges from his throat with an acidic burn. He again honors Berberian's memory by offering the listener a performance of a quality that she would have appreciated. She, Cage, and the poet would also have enjoyed the sensitivity with which Isherwood handles E. E. Cummings's words in Experiences No. 2, dating from 1945 – 48. Verse and voice are in perfect harmony, the words used by composer and singer as the metrical and interpretive cores of the music. The multifaceted imagery of conceits such as 'one pierced moment whiter than the rest' is painted by Isherwood in hues that take their glow from the text. In music that many singers would abuse through ignorance, he sings Cage's lines no less eloquently than he might deliver the lines of the Sprecher in Mozart's Die Zauberflöte or Amfortas in Wagner's Parsifal.

Cage's enigmatic 'garden of sounds' Ryoanji, conceived in the first half of the 1980s, is presented by Isherwood in the version for voice and percussion, the latter part played by the singer on a crystal wine glass after the fashion of Benjamin Franklin's glass harmonica​, the unusual instrument for which Donizetti wrote the obbligato, now typically reassigned to flute, in the title character's Mad Scene in Lucia di Lammermoor. The rewards of the singer providing his own accompaniments are too numerous to be counted in music like Cage's but are especially evident in Ryoanji. By turns ethereal and earthy, the vocal and crystalline sounds in which Isherwood cloaks Cage's music are indicative of a profound understanding of the writing. Moreover, his is the abundant, unmistakable comprehension possible only with complete, voluntary immersion in the music.

As in any artistic genre, there is always in music—or, more accurately, among its would-be avant-garde practitioners—a pernicious penchant for being different solely for the sake of difference. The importance of the rôle of artist as intellectual is often overinflated, but inquisitiveness must be at the heart of change if it is to be progress. In a context as far removed from the inventive sound worlds of John Cage as might be imagined, hearing Nicholas Isherwood's performances of the composer's music on this disc evokes the spirit of the 1960s television band The Monkees, elucidated in their Tommy Boyce and Bobby Hart-penned theme song: 'We're the young generation, and we've got somethin' to say.' Whether visual art, poetry, or music, a project with nothing to say is merely a splattering of paint upon a canvas, words upon a page, or notes upon a stave. The superb vocalism notwithstanding, the finest aspect of Arias is the abiding sense of purpose—the composer and the performer having something to say, as it were. The designation 'authoritative' is seldom used and even less frequently merited, but Nicholas Isherwood's performances of John Cage's vocal music on Aria are truly authoritative.​