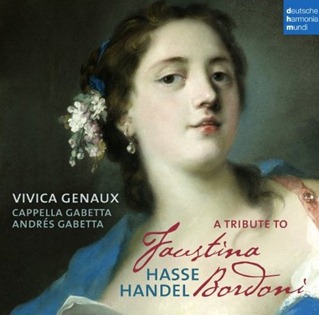 More than two centuries before audiences would honor favorite singers with epithets like La Divina, La Prudentissima, and La Stupenda, there was Faustina Bordoni, a singer whose powers of musical persuasion were so great that even the astute Viennese were charmed by her, proclaiming her their ‘New Siren.’  Born in Venice in 1697, Faustina’s musical development was nurtured by Alessandro and Benedetto Marcello, as well as Michelangelo Gasparini, under whose tutelage she refined the mezzo-soprano voice that would by the mid-1720s be one of the greatest musical wonders of Europe.  Faustina’s name is forever linked with those of Händel, for whom she created several prominent roles, and Francesca Cuzzoni, with whom she was purported to have shared a bitter rivalry like that conjured by the media between Maria Callas and Renata Tebaldi.  Like her 20th Century counterparts, however, Faustina’s legendary feud with Cuzzoni was waged by supporters and notoriety-eager correspondents for London’s periodicals: in actuality, Faustina and Cuzzoni had sung together since the beginnings of their careers, and there is no primary-source information to suggest that either singer harbored anything less honorable than professional competitiveness toward the other.  Despite her association with Händel, Faustina left Britain in 1728, with more than two decades of singing still before her, and in 1730 married Johann Adolph Hasse, in whose Cleofide she conquered the Dresden court.  She never returned to London, but her reputation among English music lovers waned only with the twilight of the Baroque.  A Tribute to Faustina Bordoni reveals that, though Händel is decidedly the more known composer, both he and Hasse knew instinctively how to compose superb music for Faustina’s voice.  The advocacy of Alaska-born mezzo-soprano Vivica Genaux for the music on this disc—as well as for Hasse’s music in general—deserved preservation on an impeccably-prepared recording, and this disc indeed proves a magnificent achievement, not only for Ms. Genaux but for the musical legacy of Faustina Bordoni.

Recorded in the appropriate acoustic of Bremen’s Sendesaal, Maestro Andrés Gabetta and his Cappella Gabetta provide a reliable foundation upon which to build a formidable musical edifice.  Whether pensive or propulsive, the music of Händel and Hasse exploits every capability of the Baroque orchestra, and the players of Cappella Gabetta respond with the virtuosity and alert playing required not only to meet Händel’s and Hasse’s demands but also to make the music sound new.  Maestro Gabetta succeeds where many Baroque specialists fail, in supporting the soloist sensitively and shaping each selection with careful attention to the emotional nuances of its text without distorting the music in an effort to impart any sort of ‘personal’ interpretation.

One of the most astonishing vocal techniques heard during the past half-century belongs to Vivica Genaux, to whom the fearsome bravura challenges of Baroque music seem not just easily manageable but completely natural.  It is very rare that a singer can execute rapid-fire coloratura without any of the individual notes being lost in the fray, but Ms. Genaux reliably provides the sort of accuracy even in passages of almost ridiculous difficulty that would allow one to transcribe the composers’ scores from her singing.  Evident on every track on this recording, Ms. Genaux’s accuracy in performing Händel’s and Hasse’s complex music compellingly reveals the quality of the voice for which the arias were composed.

The recital begins with the beautiful aria ‘Lusinghe più care’ from Händel’s Alessandro, in which Ms. Genaux will sing in several European cities in 2013.  An example of Händel’s uncanny ability to compose music that conveys the meaning of the text with great psychological insight, ‘Lusinghe più care’ is an aria that deserves greater attention from singers.  In that respect, Ms. Genaux’s performance of the aria may be a disservice to music lovers in that the perfection of her interpretation may deter other artists from attempting the aria and suffering by comparison.  Ms. Genaux’s voice has never sounded more beautiful or more focused than in the music on this disc, and her phrasing of ‘Lusinghe più care’ is supremely musical.  Händel is further represented on the disc with ‘Parmi che giunta in porto’ from Radamisto and ‘Ti pentirai, crudel’ from Tolomeo, Re d’Egitto, both of which receive from Ms. Genaux performances of impressive musicianship and ideal emotional profile.

There is an inherent sense of discovery that comes from listening to the Hasse selections on this disc.  Exploring and sharing the music of Hasse with 21st Century audiences is a passion for Ms. Genaux: in addition to having championed Hasse’s sacred music, she has also recorded the composer’s opera Marc’Antonio e Cleopatra for future release.  Hasse’s skill as a composer of instrumental music is highlighted on A Tribute to Faustina Bordoni by the inclusion of sterling performances of the Overtures to Il Ciro riconosciuto, Didone abbandonata, and Zenobia.  It is in the arias that Hasse’s cosmopolitan talents are most delightfully revealed, however, and Ms. Genaux has wisely selected an assortment of arias that covers the spectrum of Hasse’s abilities.  ‘Piange quel fonte’ from Numa Pompilio and ‘Padre ingiusto’ from Cajo Fabricio—an aria which in dramatic function and musical expression anticipates Mozart’s Idomeneo—illustrate the power of Hasse’s instincts for expressing complex emotions through music, as well as his faith in his wife’s consummate vocal capabilities.  There are also hints in Hasse’s arias for Faustina that the masterpieces of Gluck are close on the horizon.  Ms. Genaux brings to each aria uncommon skills of musicality and insightful interpretation, delivering the emotional twists and turns of each number with conviction rare to performances on recital discs, in which arias are deprived of their proper contexts.

Perhaps the most intriguing track on the disc is the aria ‘Ah! Che mancar mi sento,’ composed by Hasse in memory of his wife, who died on 4 November 1781.  The text of the aria, which depicts the grief of a lover for the departed object of his affection, is set with unique delicacy and poignancy.  Though contemporaneous with Mozart’s Idomeneo and Die Entführung aus dem Serail, ‘Ah! Che mancar mi sento’ was composed in the style familiar from the arias that Hasse created for Faustina during her career, but the depths of pathos reached in his musical tribute to his wife are remarkable even for a composer of Hasse’s gifts.  As in every piece on this disc, Ms. Genaux sings ‘Ah! Che mancar mi sento’ with rapt beauty of tone and complete technical assurance.  Ms. Genaux’s singing of this aria alone is an exquisite tribute to Faustina and to the husband who cherished her unique voice.

Faustina Bordoni was acclaimed by 18th Century audiences for the mellifluous musicality and dramatic power of her operatic performances, and the music composed for her by Händel and Hasse—indicative of the esteem both composers held for Faustina’s voice—enables 21st Century listeners to at least partially assess the qualities that Faustina brought to her performances.  Recital discs devoted to music composed for specific artists are anything but rare: Ms. Genaux herself contributed memorably to this crowded field with her recording of arias tailored to the talents of Farinelli.  What sets A Tribute to Faustina Bordoni apart from many fine recital discs is neither any novelty of approach nor the fascination of hearing unfamiliar music by an under-appreciated master composer.  This is an exceptional release because of the individual artistry of Vivica Genaux, whose integrity and consistent excellence in performing the arias of Faustina Bordoni would surely flatter the great diva as greatly as they delight the modern listener. 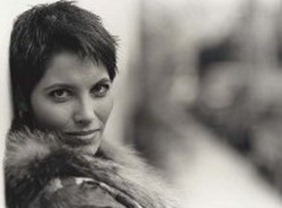