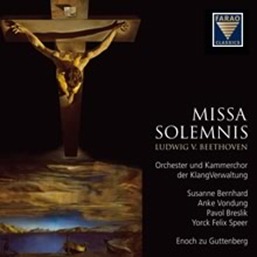 It is evident from the opening chords of this performance, recorded ‘live’ in Munich in March 2009, that Maestro Enoch zu Guttenberg intended this to be a refreshingly ‘new’ Missa solemnis, even after much-discussed ‘period’ performances by the likes of Sir John Eliot Gardiner and Philippe Herreweghe.  Textures are cleaner, not necessarily lighter than in ‘traditional’ performances but articulated with admirable clarity, and balances are often little short of revelatory in the sense that details of Beethoven’s dense orchestration are granted welcome prominence without undermining the broader structure of each movement.  This is a performance that sets out not so much to ‘rethink’ the Missa solemnis from an academic perspective as to simply approach the score with unbiased eyes and ears.  What seems an instinctive approach to a work as famously complicated as the Missa solemnis has nonetheless eluded many conductors and performances, the former pursuing ambitious efforts at leaving individual marks on the music and the latter becoming mired in those efforts.  In the celebrated performances conducted by Otto Klemperer, listeners were allowed to see through music the rage and exaltation of Beethoven’s concept of the Divine.  On this recording, Maestro zu Guttenberg presides over a performance that provides glimpses of a slightly less tumultuous but no less glorious firmament, decisions regarding tempi and instrumental color varying widely from those familiar in Klemperer’s performances and also those of period-practice specialists but equally rooted in a deep respect for Beethoven’s score.  What Maestro zu Guttenberg exhibits anew is that conductors need not strive to make the Missa solemnis monumental: the quality and profundity of the music, when allowed to unfold as Beethoven indicated in his score, are all that are required to reveal the spiritual significance and musical importance of what is by any measure one of the greatest achievements of Western art.

FARAO, a label responsible for the preservation of a number of fine operatic performances from Munich, present this performance of the Missa solemnis in sound of demonstration quality for ‘live’ recordings.  There are a few coughs and other noises off to be heard, mostly in the pauses between movements, but these are never disturbing and are merely inevitable elements of recording a work in concert before an audience.  These are more than offset in this recording (and would be were they increased ten-fold) by the immediacy of sound achieved by recording ‘live.’  There are unique qualities of a ‘live’ performance before an audience that cannot be duplicated even by recording in the same space under studio conditions, qualities that are not limited to the frisson of a live occasion and the interactions among performers and their audience.  There are very basic sonic implications of a sea of human bodies in the space: opera houses and concert halls were designed with the intention of being inhabited by audiences, their physical presence contributing to the spatial ambience of the acoustics.  FARAO have ideally captured the acoustics of Munich’s Herkulessaal with the charged atmosphere of a live performance combined with the clarity and careful balances typical of studio recordings.  This is among the best-recorded accounts of the Missa solemnis in the discography and one that is a credit to the performance that it documents.

The Orchester and Kammerchor der KlangVerwaltung are relatively new ensembles in the context of Teutonic instrumental and choral groups.  The Orchester, founded in 1997, is comprised of players from many of Germany’s and Austria’s most prestigious orchestras, including the Berliner, Münchner, and Wiener Philharmonikers.  Playing with the distinction and accomplishment that this implies, the Orchester meet Maestro zu Guttenberg’s demands with unwavering dedication and an impressively high level of execution.  Founded three years later, in 2000, the Kammerchor is likewise comprised of members of other distinguished choral ensembles, as well as experienced young singers from throughout southern Germany.  For musical accuracy and security of tone, the members of the Kammerchor need fear no comparisons with the famed choirs that take part in other recorded performances of the Missa solemnis.  Both instrumentalists and choristers consistently rise to the challenges of Beethoven’s music with heartening fearlessness, completely obliterating recollections of staid performances in the Teutonic tradition from generations past.  Maestro zu Guttenberg takes advantage of the various experiences of his orchestra and choir to shape a performance of a work that is audibly of the early Nineteenth Century but not limited in scope or impact by its time.

The performance is also fortunate to have a quartet of capable young soloists.  Munich-born soprano Susanne Bernhard, already at her young age an experienced Violetta in La Traviata and Sophie in Der Rosenkavalier, sings the soprano’s solo lines—which are nothing less than operatic—beautifully, soaring into her upper register with appealing freedom.  Anke Vondung, a very promising young German mezzo-soprano who made her Metropolitan Opera début as Cherubini in Mozart’s Le Nozze di Figaro on 2 October 2007, effectively delivers the alto lines, which admittedly do not allow plentiful opportunities to display the beauty of her voice.  Many performances of the Missa solemnis are let down by inadequate work by the bass soloist, to whom Beethoven entrusted the heartrending opening of the Agnus Dei.  Young German bass Yorck Felix Speer sings admirably throughout the performance, however, bringing special intensity and pointed vocalism to his critical contributions to the Agnus Dei.  Most impressive among the soloists is Slovak tenor Pavol Breslik.  One of the finest tenors of his generation, he made his début at the Metropolitan Opera as Don Ottavio in Mozart’s Don Giovanni on 13 April 2009, and will return to the MET in the 2010 – 11 season to sing Ferrando in the much-anticipated revival of Così fan tutte in which famed Baroque specialist and founder of Les Arts Florissants William Christie will make his MET début.  In this performance, Mr. Breslik brings to the tenor’s solo lines the plangent beauty and security of tone that have won the appreciation of audiences and critics throughout Europe.  His contributions to the opening Kyrie set the high standard for the performance, and he completes a solo quartet that is unique among recent recordings of the Missa solemnis for reliable, attractive singing.

In a matter of musicological significance, Maestro zu Guttenberg prefers the choral singing of the great ‘Osanna’ fugue rather than the assignment of the passage to the solo quartet—a decision based upon ambiguous markings in Beethoven’s manuscript—preferred by Klemperer and other conductors.  There is an undeniably rewarding precision possible when the fugue is sung by the soloists, but in a performance such as this one, in which the choristers diligently articulate the interweaving subjects in contrapuntal passages, the resulting breadth of the music makes the singing of the ‘Osanna’ by the full chorus seem inherently right.

Reviewing a 1934 performance of the Missa solemnis conducted by Arturo Toscanini, the first performance of the work by the New York Philharmonic (with the almost unbelievable quartet of Elisbeth Rethberg, Sigrid Onegin, Paul Althouse, and Ezio Pinza), an article in Time magazine stated that ‘few conductors choose to give the Missa solemnis because of its great technical difficulties, its demands on the human voice for which Beethoven never learned to write considerately.’  Those who love Fidelio might take exception at the suggestion that Beethoven never mastered composition for the voice, but it is an oft-repeated notion that is supported by plentiful examples of performances featuring singers stretched to and beyond the limits of their abilities.  Beethoven was not known during his lifetime as an adaptable man: in life and in music, he wanted what he wanted, and compromise was improbable.  Perhaps it is the lot of a great genius to demand perfection without ever truly hoping for it, to put forth visions to which contemporary eyes are not yet ready to adjust.  This is a performance, compelling not just in its unruffled grandeur but equally in its moments of sublime simplicity, that redeems the Missa solemnis from its reputation for near-insurmountable technical demands.  Enoch zu Guttenberg and his teams of excellent soloists, choristers, and instrumentalists display a communal acceptance that, in his Missa solemnis, Beethoven wanted what he wanted and, giving him what he wanted, prove that he was right. 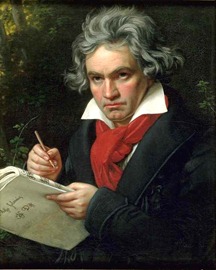