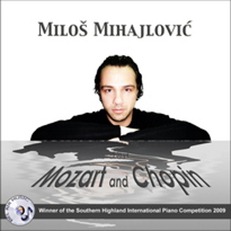 Winner of the 2009 Southern Highlands International Piano Competition in New South Wales, Australia, Serbian pianist Miloš Mihajlović received in recognition of his victory the opportunity to make this recording of music by Chopin—much represented on disc this year in both new releases and reissues timed for celebration of the bicentennial of his birth—and Mozart for Bel Air Music, a venture underwritten by Australia’s award-winning Tertini Wines.  What in previous generations was essentially an inevitable rite of passage for a young musician after winning a major competition is in the economic environment of the present recording industry a decided luxury.  In the case of Miloš Mihajlović, it is a luxury for which those who appreciate the music of Chopin and Mozart and those who take special interest in wonderfully promising young pianists should be grateful.

None of the pieces on this disc is unfamiliar or under-represented on commercial recordings.  Whereas many young pianists who are fortunate enough to make recordings in the early stages of their careers are eager to make their marks with performances of lesser-known pieces of which there are not scores of recordings by the greatest pianists of the past century, Mr. Mihajlović possesses the courage and foresight to make his international recording début with music squarely at the center of the traditional piano repertory.  It can be dangerous for a young artist to invite comparisons of his work with decades of recorded performances by seasoned, celebrated pianists: when his playing is shaped by an assured technique and genuine interpretive insights, however, his credentials are appreciated on their own merits, and the risks are justified.  With the recent publicity concerning the concert performances by the legendary Ivo Pogorelić, perhaps merely the mention of a ‘new’ pianist from Serbia is sufficient to garner interest, but his playing on this disc reveals that Mr. Mihajlović has at his command the complete technical mastery and mature artistry not only to satisfy a music lover’s curiosity but also to stand proudly alongside Mr. Pogorelić and to join the ranks of the finest pianists of the new century.

The piece with which the disc opens, Mozart’s D-minor Fantasia (K. 397), is among the Salzburg master’s most enigmatic and difficult pieces for piano.  Little is known about the circumstances of the composition of the Fantasia except that Mozart never completed the piece.  The incomplete form in which it survives creates many mysteries: called a Fantasia because of its meandering musical moods and unpredictable changes in tempo, the piece adheres to none of the musical forms prevalent in music for the piano in Mozart’s time.  Though of great technical difficulty, this lack of formal boundaries has made the Fantasia popular with pianists because the scope for individual interpretation is broadened.  Mr. Mihajlović plays the piece with rhythmic freedom that exploits the rhapsodic nature of the Fantasia, but he also maintains an audible sense of grace that reminds the listener that this is music by Mozart.  The A-minor Sonata (K. 310/300d), one of only two of Mozart’s Piano Sonatas in minor keys, is also a seminal work.  Composed in Paris during the summer of 1778, Mozart’s work on the Sonata may have coincided with the sudden illness and death of his beloved mother, who died at their flat in the rue du Sentier on 3 July 1778.  It is perhaps irresponsible to suggest that any one of Mozart’s Piano Sonatas is his most profound, but the A-minor Sonata undeniably contains some of its composer’s most brooding music for the solo piano.  Mr. Mihajlović’s performance of the Sonata, observing every stylistic element of the piece with precision that suggests both absolute familiarity with the music and understanding of historically-informed practices in the playing of keyboard music of Mozart’s era, exhibits the same approach that sounds inherently right for the music that can be heard from a ‘period specialist’ keyboardist such as András Schiff—a considerable achievement for a young pianist.  So extraordinary is the stylistic aptitude with which Mr. Mihajlović plays the Mozart selections on the disc that it is possible to think that he is, in fact, playing a period pianoforte rather than a modern instrument.  Equally impressive, though, is his respect for the emotional nuances of the music, every shift in mood rendered poetically but without distorting the musical continuity.  Mr. Mihajlović’s playing proves as eloquently as that of any pianist in recent memory that the greatest test of a musician’s artistry is to perform in a manner that allows the music at hand to be heard on its own terms, and with his playing of these Mozart pieces Mr. Mihajlović rivals the best performances of this repertory by allowing the listener to hear, unencumbered, the voice of Mozart.

If more demanding from a purely technical perspective, it might be argued that the music of Chopin is, in comparison with that of Mozart, more emotionally direct, the later composer’s pieces more consistently evoking a specific mood rather than proving temperamentally chameleonic like the music of Mozart.  That Mr. Mihajlović so thoroughly inhabits through his playing the musical world of Chopin is remarkable after hearing his stylistically spot-on playing of Mozart.  In the first Chopin piece on this disc, the G-minor Ballade (Op. 23, No. 1), Mr. Mihajlović announces to the listener the dizzying virtuosity of his playing, a quality that never fails him in any of the pieces on the disc.  Even in Chopin, however, Mr. Mihajlović searches beyond the furious flurries of notes, quietly underlining rhythmic buoyancy and using dynamic contrasts to reveal unexpected hues in even the very familiar ‘Minute’ Waltz and C-minor Waltz (Op. 64, No. 2).  The wonderful B-minor Scherzo (Op. 20, No. 1) receives a particularly fine performance: with his exaltedly lyrical playing of the contemplative second theme, Mr. Mihajlović—on Chopin’s behalf—aims for the heart.  Both in the Scherzo and in the Opus 22 Andante spianato & Grande Polonaise (played here without its original orchestral accompaniment) that closes the recital, Mr. Mihajlović shapes Chopin’s delicate melodic phrases with unimpeachable poise, executing the ornaments with the distinction of a great bel canto singer performing an aria by Bellini.  Primary and secondary themes, harmonies, bass figurations in accompaniments, and the most elaborate of ornaments are all in Mr. Mihajlović’s playing equally important components of the music.  Chopin of course knew and admired Bellini during the time when both composers were in Paris, and without in any way diminishing appreciation of his technical brilliance perhaps the most memorable quality of Mr. Mihajlović’s playing of Chopin on this disc is his talent for truly making the piano seem to sing.

It also merits mention that this is an excellently-recorded disc, engineered by Mr. Mihajlović, produced by Aleksandar Radulović, and mastered for Bel Air Music by Ole Jorgensen.  Both balances and the timbre of the instrument are clear, with only a pair of the piano’s highest tones losing focus.  Throughout, the listener has the aural perspective of hearing a recital in a small venue.

The unfortunate truth is that, much as the advocates of both genres might deny it, serious concert music and popular music are very much alike in the ways in which talented youngsters come and go.  Artists who display from the first the indescribable affinity for survival are sadly rare.  If his artistry continues to develop after the manner represented by his playing of the music of Mozart and Chopin on this disc, Miloš Mihajlović is a pianist whose work will endure for decades to come and whose name will be synonymous with pianism of the highest order.