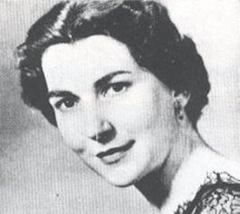 In an age in which momentary success can be propelled by relentless media coverage into instant stardom, the work of superb artists can be easily overlooked simply because their careers are focused on quietly pursuing the goals for which they were trained, seeking the fulfillment of achievements won through fastidious study and hard work.  The virtue of reliability, a rarity not merely among artists but among collective humanity, is seldom the calling-card of a famous singer.  It is, however, the cornerstone upon which the foundations of genuinely great singers’ legacies are laid.

With the passing of Helen Watts, CBE, on 7 October, the British musical establishment lost one of its most reliable singers, though she had been in retirement since 1985.  The broader musical firmament lost a wonderful artist, and three generations of the record-buying public lost a trusted, beloved friend upon whom they knew they could rely for beautiful, touching singing no matter which composer’s name was on the record’s cover.

Ms. Watts was born in Milford Haven, Pembrokeshire, Wales, the daughter of a pharmacist.  Despite early signs of musical gifts, Ms. Watts’ goal was to pursue a career in psychotherapy.  She nonetheless enrolled at the Royal Academy of Music and joined both the BBC Singers and the chorus of the Glyndebourne Festival.  She enjoyed an early success in a 1953 concert performance of Gluck’s Orfeo ed Euridice: impressed by her singing as Orfeo, the Welsh conductor Geraint Jones recommended Ms. Watts to Sir Malcolm Sargent, who engaged her to sing the music of Johann Sebastian Bach during the 1955 Proms.  During her career, she would return to sing at the Proms a further twenty-five years, taking on repertory ranging from Bach, Beethoven, and Wagner to Britten, Tippett, and Schoenberg.

Versatility was a defining characteristic of Ms. Watts’ operatic and concert work, both on stage and in the recording studio.  She made her debut with the Royal Opera, Covent Garden, in 1965 as the First Maid in Richard Strauss’ Elektra, a role she had sung in Salzburg the previous year at Herbert von Karajan’s invitation.  Ms. Watts’ tenure at Covent Garden encompassed roles as diverse as Erda in Wagner’s Das Rheingold and Siegfried, Mrs. Sedley in Britten’s Peter Grimes, and Sosostris in Sir Michael Tippett’s Midsummer Marriage, a role in which she excelled in the house and on records.  Under the direction of Raymond Leppard, Ms. Watts sang Monteverdi’s L’Incoronazione di Poppea for Scottish Opera.  She also enjoyed great success at the 1971 Salzburg Festival in the castrato role of Farnace in Mozart’s Mitridate.  She triumphantly returned to her native land in 1969 to sing Mistress Quickly opposite the Falstaff of fellow Welshman Sir Geraint Evans for Welsh National Opera.  Ms. Watts maintained a concert repertory that was equally vast, singing well-received recitals and concerts that included a still-discussed 1970 performance of Mahler’s Kindertotenlieder at Carnegie Hall with Sir Georg Solti.

Ms. Watts inherited the mantel of a prestigious tradition of British contralto singing that produced Dame Clara Butt, Kathleen Ferrier, and Gladys Ripley.  Both Ferrier and Ripley died just as Ms. Watts’ career was beginning, creating a void that she filled with artistic integrity and confident dignity.  Naturally for a British singer of her generation, the music of Benjamin Britten was central to Ms. Watts’ career.  She sang in the British premiere of the Cantata Academica and memorably sang both Spring Symphony and the title role in The Rape of Lucretia (in which she alternated during a 1964 tour of the Soviet Union with the young Dame Janet Baker, under the composer’s direction).  The music of Sir Edward Elgar was likewise prominent in Ms. Watts’ repertory: her recording of the Angel in The Dream of Gerontius set a lasting standard despite formidable competition.

It is perhaps in the music of Händel that Ms. Watts proved most memorable, however.  She joined the ranks of the Handel Opera Society in 1958, first singing Didymus in Theodora and Juno in Semele before taking the title role in Rinaldo.  On records, Ms. Watts was the Händelian par excellence of her generation, having recorded Messiah four times (the most celebrated of these recordings being the Philips set with Sir Colin Davis, though she was in equally good voice and perhaps even more touching for Raymond Leppard on ERATO) and contributed to L’Oiseau Lyre’s groundbreaking recording of Sosarme a superb performance of the role of Melo that towers over that of Sir Alfred Deller in the name-part.  Ms. Watts finest achievement in Händel repertory is likely her performance of David in a 1962 Vienna performance of Saul conducted by Møgens Wöldike, recorded in concert, in which she sang David’s lament for Jonathan (‘O Jonathan!  How nobly didst thou die’) with profundity, dolorous but beautiful tone, and palpable emotional engagement that have never been equaled by any other David on records, male or female.

Ms. Watts was awarded the Commander of the British Empire distinction in 1978 in recognition of her service to British music.  Her husband, violist Michael Mitchell, died in 2007.

Few artists have contributed so significantly to the musical life of a nation or amassed so considerable a discography with the grace and unpretentiousness Ms. Watts brought to her work.  Much of her career traced the path that led from performing traditions inherited from the nineteenth century to the ‘historically-informed’ practices of the last decades of the twentieth century, spanning just in her Bach performances the approaches of successive generations of conductors from Sir Malcolm Sargent to Helmuth Rilling.  It might be argued that, from a musicological perspective, unparalleled progress was made during the course of Ms. Watts’ career in the realization of Baroque music as its composers presumably conceived it.  That, a half-century after many of her recordings were made, listeners return – not just sentimentally but sure of the bountiful musical rewards – to Ms. Watts’ performances confirms that, however much practices and conceptions of how certain repertory should be performed change, the true style of any music is found in the commitment with which it is sung.  Helen Watts understood this instinctively and dedicated herself wholeheartedly to every score that was placed before her.  What an invaluable virtue this reliability truly was. 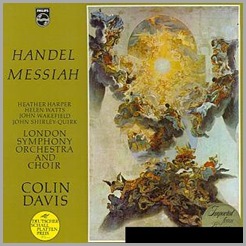