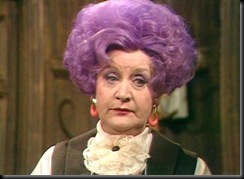 The lines between art and camp are often indistinct, and there are performers whose work blurs the boundaries to such a degree that it is no longer possible to make facile categorizations.  Such a performer was the marvelous English comedic actress Mollie Sugden, who passed away at hospital in Guildford on 1 July.  Veteran of many celebrated British television serials, Ms. Sugden will surely be most remembered for her inspired turn on the sitcom Are You Being Served?  Ms. Sugden’s legacy proves that generous piles of chameleonic hair are just as effective as horned helmets for cultural iconography.

Born in Keighley, Yorkshire, Ms. Sugden felt early in childhood the gratification of inspiring others’ laughter.  After contributing to the war effort by working in a munitions factory, Ms. Sugden studied at the Guildhall School of Music and Drama in London.  Success in radio and television quickly followed Ms. Sugden’s matriculation from the Guildhall, not least with her landing of the role of pub owner Nellie Harvey on the popular (and still running) Manchester-based serial Coronation Street.

In 1972, Ms. Sugden was cast as Mrs. Slocumbe in the BBC1 sitcom Are You Being Served?, a serial featuring an ensemble cast as eccentric salespeople in the fictitious Grace Brothers department store (inspired, it is said, by Simpsons of Piccadilly).  Essentially a parody of the Victorian class structure still prevalent in Britain in the third quarter of the twentieth century, Are You Being Served? pushed boundaries with frequent use of innuendo-laden double entendres, including Ms. Sugden’s famous, ‘Animals are very psychic; the least sign of danger and my pussy’s hair stands on end.’  In their service of Grace Brothers’ [seemingly very infrequent – was there a recession on?] clients, the cast of Are You Being Served? satirized the lingering British class stereotypes that so amused and frustrated young generations of Britons.  In Ms. Sugden’s hands, Mrs. Slocumbe was an aptly ramrod foil to the openly closeted Mr. Humphries of the late, wonderful John Inman.  Having looked down her nose on the disorder of her colleagues’ lives, it was frequently revealed with hilarity that Mrs. Slocumbe’s own life was far from being in order.  Ms. Sugden cleverly allowed hints of vulnerability to show through the cracks in her haughty demeanor.  Against expectations, Are You Being Served? ran for ten series from 1972 to 1985, ironically amassing sixty-nine episodes, and has continued to be broadcast throughout the British Commonwealth and in America, where the serial has been a bastion of popular programming for PBS stations for two decades.

The continuing success of Are You Being Served? as both a cultural phenomenon and genuinely entertaining television is a testament to Ms. Sugden’s genius for comic timing and sincerity.  It would be unjust to remember Ms. Sugden solely for Mrs. Slocumbe, which certainly was not her only and very probably was not even her best role, but Ms. Sugden’s work in Are You Being Served? is indicative of her commitment to outstanding work in an ensemble, an art that has somehow become endangered.  Many of the brightest stars are found in constellations, after all, and Mollie Sugden shone very brightly indeed.