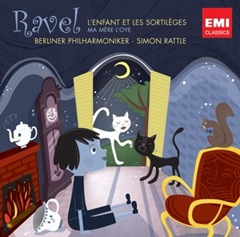 Collaborating with the celebrated French writer Colette, Ravel enjoyed in L’Enfant et les Sortilèges what arguably is one of the finest, most metaphorical librettos in opera.  Originally approached with the proposition of writing the text for a musical work that would be largely balletic, Colette famously completed the manuscript in only seven days.  Of the several composers under consideration, Colette was satisfied only with the notion of her text being set to music by Ravel, whose service in World War I delayed completion of the project: a first copy of the libretto mailed to Ravel on the front in 1916 was lost, a replacement ultimately reaching him in 1917.  Recognizing the merit of the text, Ravel quickly agreed to set the libretto.  Work was nonetheless slow, prompting Colette to doubt that the project should ever reach fruition.  To Colette’s delight, however, the completed L’Enfant et les Sortilèges was first performed in Monte Carlo in 1925, conducted by Victor de Sabata and featuring ballet sequences choreographed by George Ballanchine.

The beauties and novelties of Ravel’s score are numerous, and Colette felt upon hearing the opera that her text had been expanded by Ravel’s music into something truly meaningful.  The opera presents the largely symbolic story of a naughty child whose cruel treatment of creatures large and small, culminating in a nasty exchange with his well-intentioned mother, results in fanciful taunting by a veritable host of household objects and forest animals.  When the sylvan fracas spirals out of control, both a pitiful little squirrel and the child are injured: awakened to compassion by the boy’s anguish and his binding of the squirrel’s wounded paw, the frightened and suddenly regretful forest creatures struggle against their bestiality in order to summon one unison cry of ‘Maman’ to call the boy’s mother to him.  Hearing Ravel’s music, perhaps Colette was as impressed as is the modern listener by the astonishing extent to which this resolution can, in a persuasively sensitive performance, touch the hearts of an audience.  As surely as the figurative spell is broken by the animals’ recognition of the boy’s innate humanity, a spell is cast over audiences by the endearingly approachable fable of goodness righting seemingly unforgiveable wrongs.

Ravel’s music for L’Enfant et les Sortilèges is as varied and virtuosic as that for the composer’s previous opera, L’Heure espagnole.  A variety of dance rhythms are employed, not least the swinging foxtrot to which the Wedgwood teapot and china teacup sing their English and mock-Chinese duet.  The opera is shaped throughout in the manner of an extended symphonic movement, thematic development taking often whimsical forms as the story progresses.  As in all of his mature scores, Ravel makes full use in L’Enfant et les Sortilèges of the orchestra, scoring every scene with delicacy in order to maximize both musical and dramatic impact.  There are in the plaints of the Princess and the child, the lament of the squirrel, and the final scene moments of exquisite beauty, shaped by the unerring finesse of Ravel’s writing.  Logistically, L’Enfant et les Sortilèges is as challenging to stage as Janáček’s Cunning Little Vixen, but Ravel’s score is without question one of the musically finest and emotionally most significant French operas of the twentieth century.

The opera receives in this recording, drawn from September 2008 concert performances in Berlin’s Philharmonie, a performance that not only meets the piece’s demands but revels as much in the orchestral and vocal virtuosity as in the psychological underplay of the opera.  The Berliner Philharmoniker play with disarming command of Ravel’s cosmopolitan Gallic style, every tone placed perfectly within the musical landscape.  Individual instruments are played with technique and beauty of tone worthy of solo concert artists, and the ensemble blends with the sonorous sensuality of chamber players.  A measure of the credit for this must surely be granted to Sir Simon Rattle, conducting the performance with vigor, rhythmic precision, and involvement that, quite frankly, are all the more remarkable for being rather atypical.  More so than in any of Mr. Rattle’s other operatic recordings, he here seems so much more than a talented conductor whose nose is pressed to his score: so engaged is he in this performance, it is impossible to avoid wondering if the opera conjures memories of his own precocious childhood.  It would be difficult to praise Mr. Rattle’s work more highly than by stating that his performance rivals the classic recording conducted by Ernest Bour.  Appreciation is also due to EMI’s engineering team for the sound quality, never negatively conveying the ‘live’ circumstances of the recording, is quite simply ideal.

The performance benefits greatly from a team of exceptionally gifted artists in secondary roles.  A singer as great as Belgian bass-baritone José van Dam, still on excellent form, contributes amusingly as the Armchair and the groaning Tree.  Baritone François Le Roux, a celebrated Pelléas, is a wonderfully growling Grandfather Clock and Cat, with whom mezzo-soprano Sophie Koch duets delightfully.  Ms. Koch also proves sweetly touching as the long-suffering Squirrel.  Soprano Mojca Erdmann is especially good as the widower Bat, singing of his motherless children.  Jean-Paul Fouchécourt upholds the tradition of Hugues Cuénod and Michel Sénéchal as the Teapot, the arithmetic-spouting Old Man, and the Frog, singing with poise and offering many examples, not least in his duet with the Teacup, of perfectly-modulated head tones in the classic French manner.

In her roles as the Fire, the Princess, and the Nightingale, soprano Annick Massis sings with the brilliance of tone and attack of a true coloratura prima donna.  The music demands no less, but even among the impressive collection of singers in the discography of L’Enfant et les Sortilèges no soprano brings greater versatility or truer musicality to the music than Ms. Massis.  The security of Ms. Massis’ technique makes light work of the treacherous tessitura of her roles, leaving the singer free to focus on interpretive nuances.  Especially moving is Ms. Massis’ singing of the Princess’ plaint, perhaps the most impressive portion of a performance that is stylistically, linguistically, and above all musically gorgeous from first note to last.

Equally beguiling as the Mother, the Teacup, and the Dragonfly, contralto Nathalie Stutzmann sings with the same commitment and intensity familiar from her performances of Baroque repertory.  Ms. Stutzmann’s voice remains eerily beautiful, the depth of her tone bringing frustrated authority to the Mother, charming pique to the Teacup, and buzzing vivacity to the Dragonfly.  The only possible regret is that Ms. Stutzmann has not more to sing.

The Child – hateful, befuddled, and sincerely remorseful in turn – is sung with point and poignancy by mezzo-soprano Magdalena Kožená.  Ms. Kožená’s tone is bright but convincingly boyish, and there is an awareness in her performance of a transformation from a priggish to a more sensitive character.  There is little doubt that this boy’s thoughts will quickly return to mischief, but his sorrow and regret are sincere in the moment.  Most vitally, it is evident in Ms. Kožená’s performance that a good heart beats within the boy.  Vocally, there is nothing in the Boy’s music that challenges Ms. Kožená’s powers, and she enters into the spirit of the score as readily and convincingly as any of her native French-speaking colleagues.

All of these elements combine to render a thrillingly joyous and movingly painful performance of L’Enfant et les Sortilèges.  Equally prevalent are the modernity of the music and the timelessness of the fairy-tale story, qualities that are unified by idiomatic conducting and vocal performances to remind the listener that great music gets at the heart of a matter whether old or new, tonal or atonal.  Colette recognized at once that Ravel’s score for L’Enfant et les Sortilèges was great music, and this wonder-filled performance reveals anew that Colette and Ravel created a truly great work of lyric theatre.