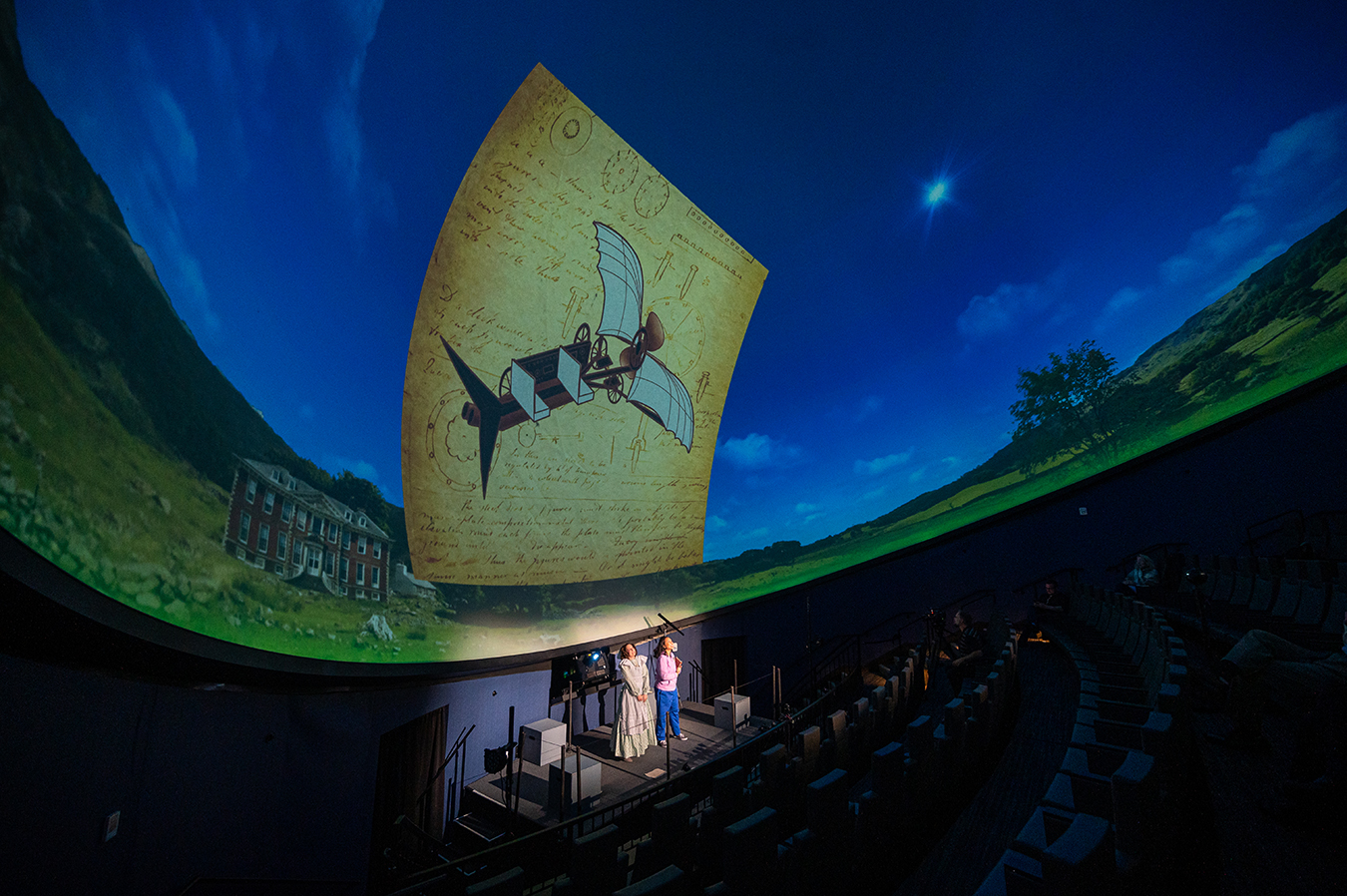 Many of the earliest human endeavors known to history were attempts to understand or connect with the cosmos. From the inception of cognition, man has sought inspiration and solace in the stars, marveling at the unfathomable expanse of space and contemplating the possibility that, somewhere among distant realms, other beings exist and turn their eyes towards Earth. Ancient mythologies gave constellations terrestrial identities. Mesoamerican cultures found in the motions of the heavens harbingers of the future. The lives of aboriginal peoples were guided by celestial signs. Having harnessed the navigational power of the stars to explore all corners of this planet, humanity looked upward, daring to dream of ascending into the entrancing void.

Just as the call of the sea resounds in Ralph Vaughan Williams’s Riders to the Sea and Benjamin Britten’s Peter Grimes and Billy Budd, the spellbinding voice of space sings in every moment of composer Mark Lanz Weiser’s and librettist Amy S. Punt’s opera Galaxies in Her Eyes. Frequent collaborators, composer and librettist melded their melodies and poetry into a single, indivisible entity that made of an enterprising girl’s fascination with space an engrossing theatrical experience. Punt’s libretto communicated the heroine’s youthful zeal with welcome concision and straightforwardness, curiosity emerging from the character’s thoughts rather than from poetic conceits. Crucially, the words were credible as those of a witty young lady and the historical figures with whom she engages, and Weiser’s musical treatment of them effectuated textual clarity. 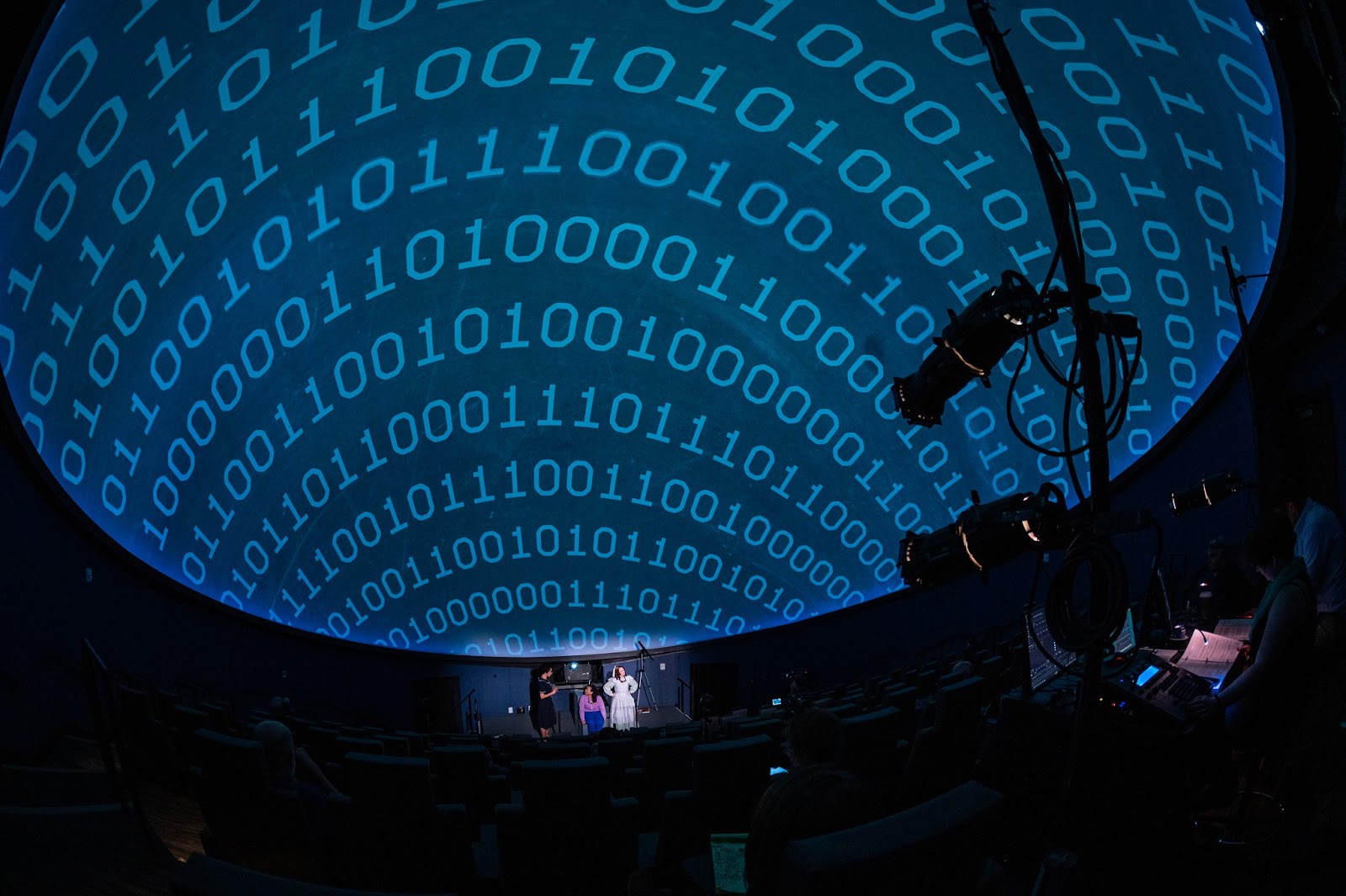 Weiser’s score takes the listener on a riveting, intensely moving journey through the galaxies that the opera’s heroine longs to visit. In both musical structure and subject matter, there are parallels between Galaxies in Her Eyes and Philip Glass’s Galileo Galilei. Momentum is provided by an elastic use of ostinati, over which vocal lines take flight as harmonies intertwine with tonal ambiguity that harkens back to Richard Strauss’s Die Frau ohne Schatten. Weiser’s writing for string quartet follows the model of Schoenberg’s Verklärte Nacht in integrating bewitching lyricism with bracing dissonances. Influences past and present are absorbed into Weiser’s unique musical language, which in Galaxies in Her Eyes metamorphoses complex code and equations into sounds of simple beauty.

Presenting the professional world première of Galaxies in Her Eyes in High Point University's 125-seat Culp Planetarium was a fortuitous union of work and venue with few equals in operatic history, one made possible by the espousal of the planetarium’s director, astrophysicist Dr. Brad Barlow. Produced with a singer’s instincts and insightfulness by HPU Associate Professor of Music Dr. Scott MacLeod, the staging lifted Punt’s words and Weiser’s music from the page with a level of immediacy rare in any art form. Bringing her concept for the opera to fruition, director Kristine McIntyre resourcefully transformed every spatial limitation into a strength, capitalizing on the visual splendors of Kathy Maxwell’s stunning projections and lighting designs, Dr. Barlow’s inventive graphic and programming schematics, and Jason Estrada’s elegant costume and makeup creations to fashion an atmosphere that was both seemingly infinite and palpably intimate. The ingenuity with which the setting was incorporated into the opera’s narrative was incredible, the visual stimuli of celestial bodies and pioneering titans of mathematics, physics, and astronomy assimilating the audience’s collective dreams of space into the opera’s context. 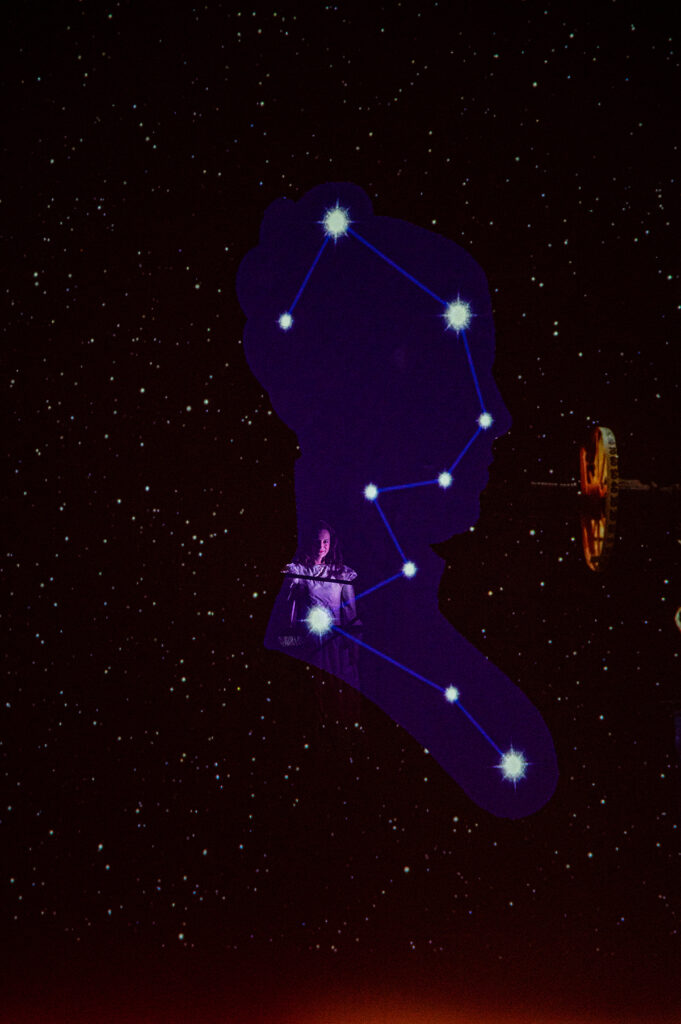 Concealed behind the planetarium’s dome, the string quartet drawn from the ranks of the Winston-Salem Symphony—violinists Fabrice Dharamraj and Emilia Sharpe, violist Simon Ertz, and cellist Laura Shirley—and pianist PG Hazard played superbly under the direction of conductor Karen Ní Bhroin. Even with technological assistance and modest musical forces, piloting a performance in such a non-traditional venue generated uncommon challenges. Ní Bhroin’s experience as Assistant Conductor of the Winston-Salem Symphony was invaluable, her knowledge of diverse repertoire begetting a reading of Galaxies in Her Eyes in which the facets of Weiser’s music coruscated. Serving as the nucleus around which the string players’ sounds whizzed and whispered, Hazard managed the keyboard’s transitions from piano to celesta virtuosically, her technical expertise supporting interpretive sagacity. Conductor and instrumentalists ensured that very wonder of the opera’s visual staging was matched by a musical detail of equal brilliance. 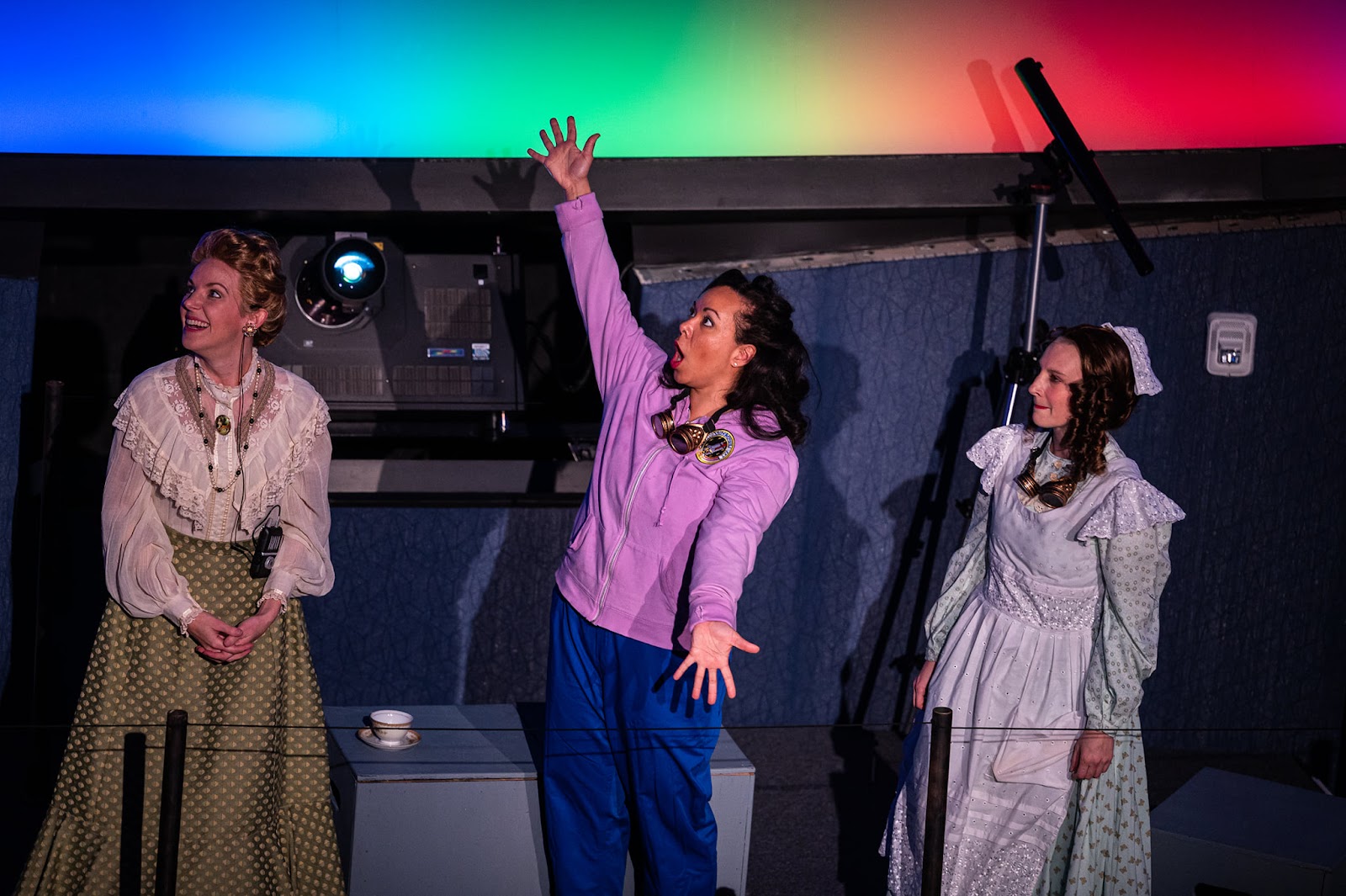 Separated from her mother during a stargazing excursion, the adolescent Eden awakens in the company of Augusta Ada Byron King, Countess Lovelace, the significance of whose contributions to Charles Babbage’s long-celebrated mathematical work has only been fully recognized in the past half-century. Vibrantly portrayed in this production of Galaxies in Her Eyes by soprano Lindsay Kesselman, Weiser’s and Punt’s Lady Lovelace rejoices in her eccentricity, taking no notice of the differences between them as she affectionately befriends the dazed Eden. Kesselman sang intrepidly, mastering the part’s angular writing and wide intervals with unflinching commitment and finessing melodic lines as though she were interpreting a Schubert Lied. Paralleling Eden’s odyssey, Kesselman limned the pathos of Lady Lovelace’s desire to find her own mother, but there was also humor in moments like her rejoinder when accused by Eden of being bossy that ‘it is pronounced busy.’ The soprano’s vocalism reveled in the pure joy of singing, heightening a characterization that exuded the gratifying fulfillment of mathematical computation. 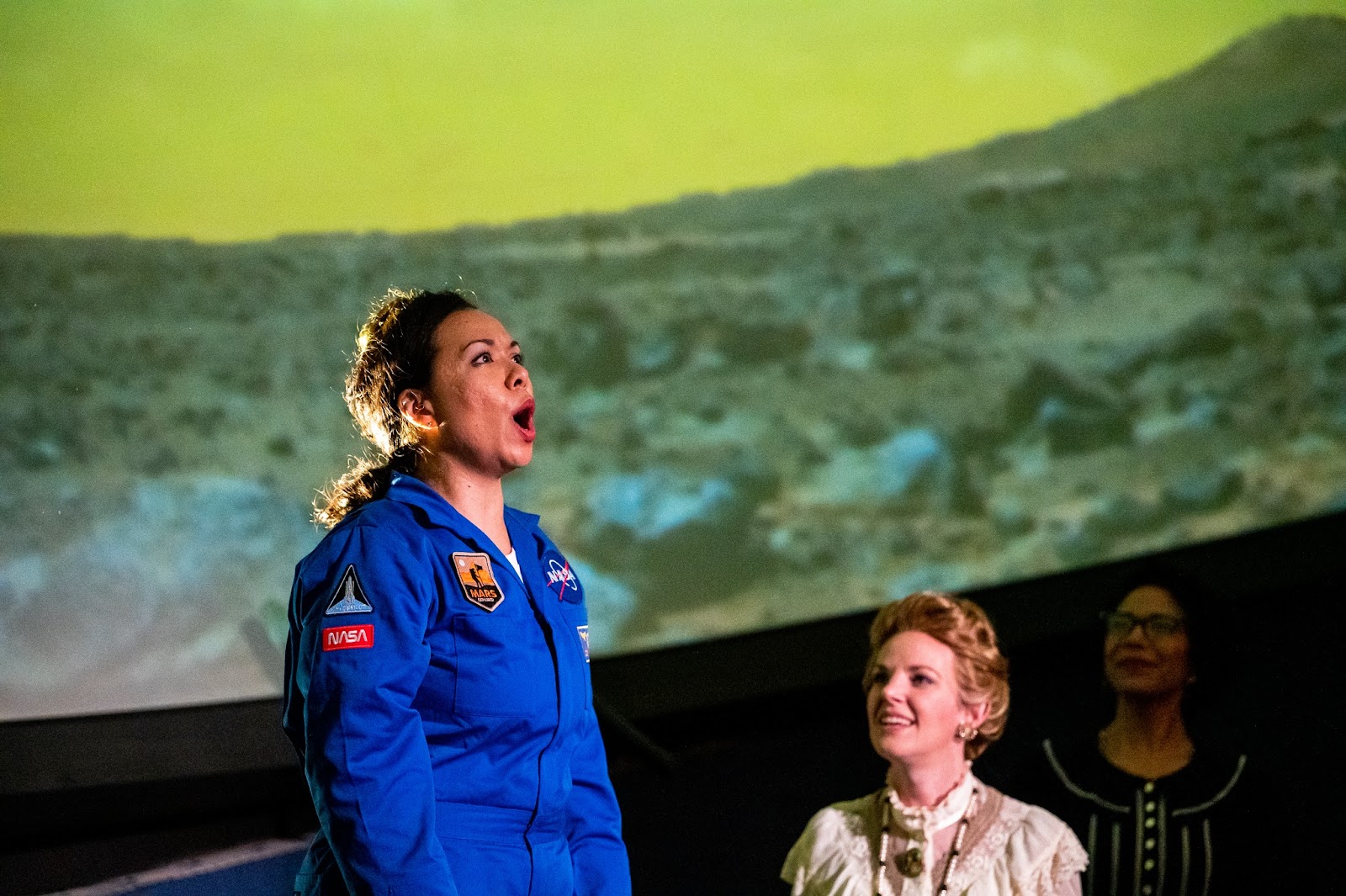 Vocally and dramatically, mezzo-soprano Amanda Lynn Bottoms’s depiction of Katherine Coleman Johnson, one of the first women of color employed in scientific work by NASA and a central focus of the book and feature film Hidden Figures, was captivating, the character’s sisterly protectiveness towards Eden allied with irrepressible pride in her work. The sequence in which Johnson describes the development of NASA’s earliest computer coding was the performance’s most thrilling scene, Bottoms’s singing and acting bringing the too-long-unheralded genius to life with extraordinary specificity, as though archival footage of Johnson herself were set to music. Her understated utterance of ‘One day, it hit me’ imparted the innate humility of her portrayal. Suffused with benevolent warmth when interacting with Eden, Bottoms’s voice blazed excitingly when Johnson recounted her work with fifty thousand equations. Bottoms’s garnet-hued timbre was easily distinguished in ensembles, in which she delivered Johnson’s lines fervently, and, even when she was obscured by darkness, her presence was unmistakable.

The third of the trailblazing ladies who aid the adolescent Eden in finding her own path to the stars, Annie Jump Cannon, collaborated with colleagues at Harvard University on a system of categorizing stars that enabled all future space exploration by expanding scientists’ understanding of intergalactic evolution. The importance of Cannon’s accomplishments was honored by the powerful singing of mezzo-soprano Sarah Nordin. The historical Cannon was surely a formidable woman, a noted suffragist in addition to her scientific work, and Nordin brought her to the operatic stage with cyclonic intensity, the columnar firmness of the voice effortlessly projecting the lady’s indomitable spirit into the planetarium. On some levels, Eden’s three historical forebears represent aspects of a single personality, Ada Lovelace personifying playful precocity and Katherine Johnson embodying studious sobriety. As sung by Nordin, Cannon was the voice of advocacy and self-reliance. A voice such as hers cannot be ignored, and the singer’s performance cogently communicated the gravitas of both the character and the opera’s message of progress through self-improvement and esteem for innovators of the past. 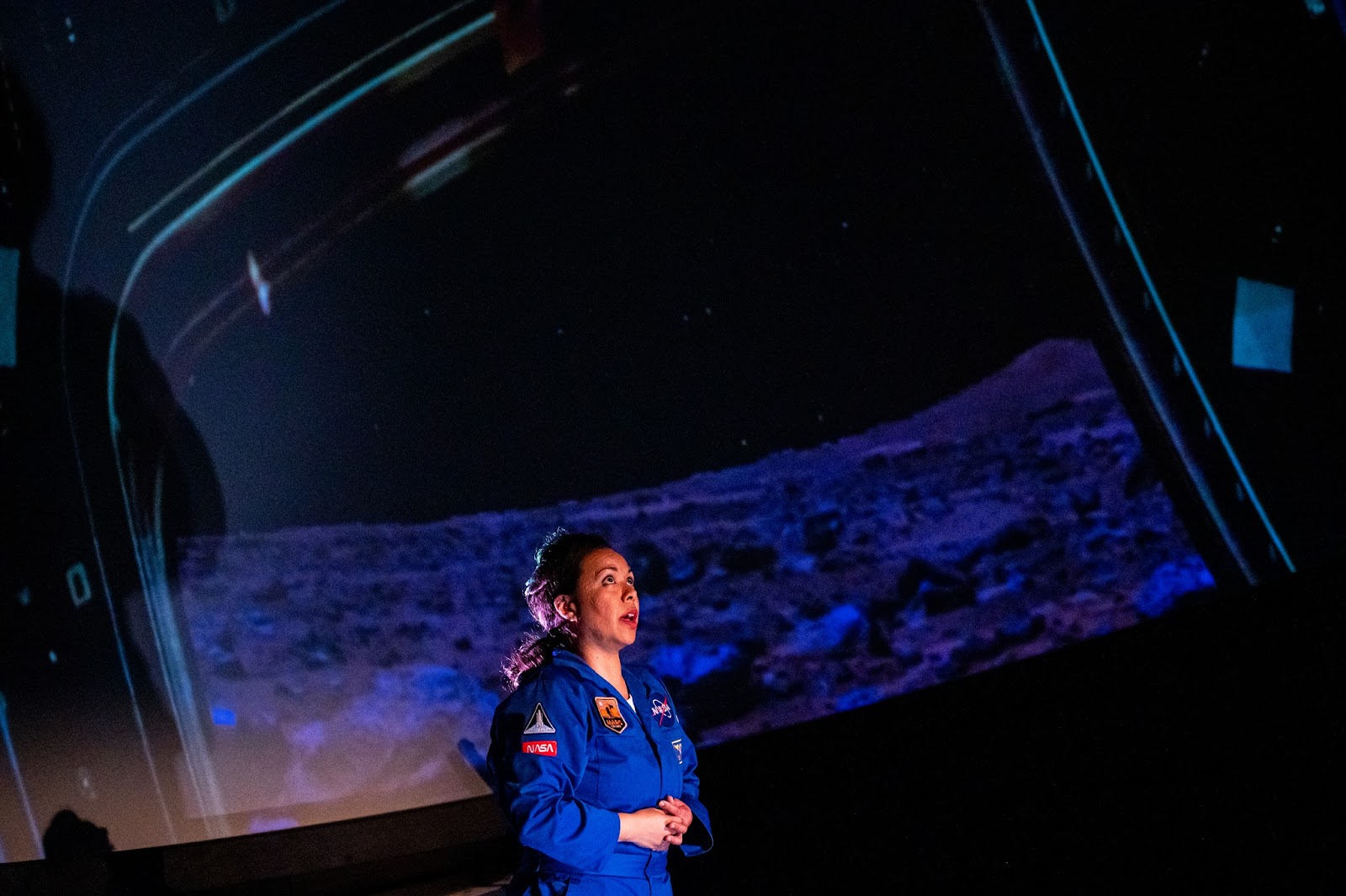 Eden, the youngster whose misadventure precipitates the time-defying events of Galaxies in Her Eyes, is a cousin of the eponymous protagonists of Menotti’s Amahl and the Night Visitors and Rachel Portman’s The Little Prince, but soprano Diana Thompson-Brewer made Eden a unique character, a girl recognizably like and absolutely unlike any other. From the start of Eden’s expedition, Thompson-Brewer sang Weiser’s music and Punt’s words with disarming sincerity. Eden’s reactions to each of her exchanges with her mathematical ancestors were astutely differentiated, but her yearning for her mother was omnipresent in the soprano’s performance.

Eden is no ordinary operatic heroine, but Thompson-Brewer approached her music with the same concentration that she devotes to rôles like Mozart’s Königin der Nacht, Donizetti’s Lucia, and Strauss’s Zerbinetta. Eden’s vocal lines make relatively modest demands by comparison, but Thompson-Brewer left nothing to chance, her singing demonstrating the confidence of preparedness. She managed in the opera’s brief duration to forge a richly-detailed depiction of Eden, culminating in an uplifting realization of the girl’s dream to land on the surface of Mars. The revelation in the opera’s final scene that Eden’s mother had died, the loving daughter singing that her father had done his best but could not fill her mother’s absence, was all the more devastating for being fleeting. Eden’s trek began as a girl’s physical quest and ended as a gloriously independent woman’s mission to reconnect to the mother who nurtured her dreams. Along the way, Thompson-Brewer’s singing shone as radiantly as the constellations Eden revered.

There is no chorus in Galaxies in Her Eyes, but some of the most stirring music in Sunday’s performance was the chorus of expressions of amazement from the many children in the capacity audienc​e. Their adult companions responded to the opera no less exultantly, succumbing to music’s faculty for marginalizing the differences that separate people. In only fifty minutes, the galaxies that glimmered in Eden’s eyes colonized the audience’s hearts.