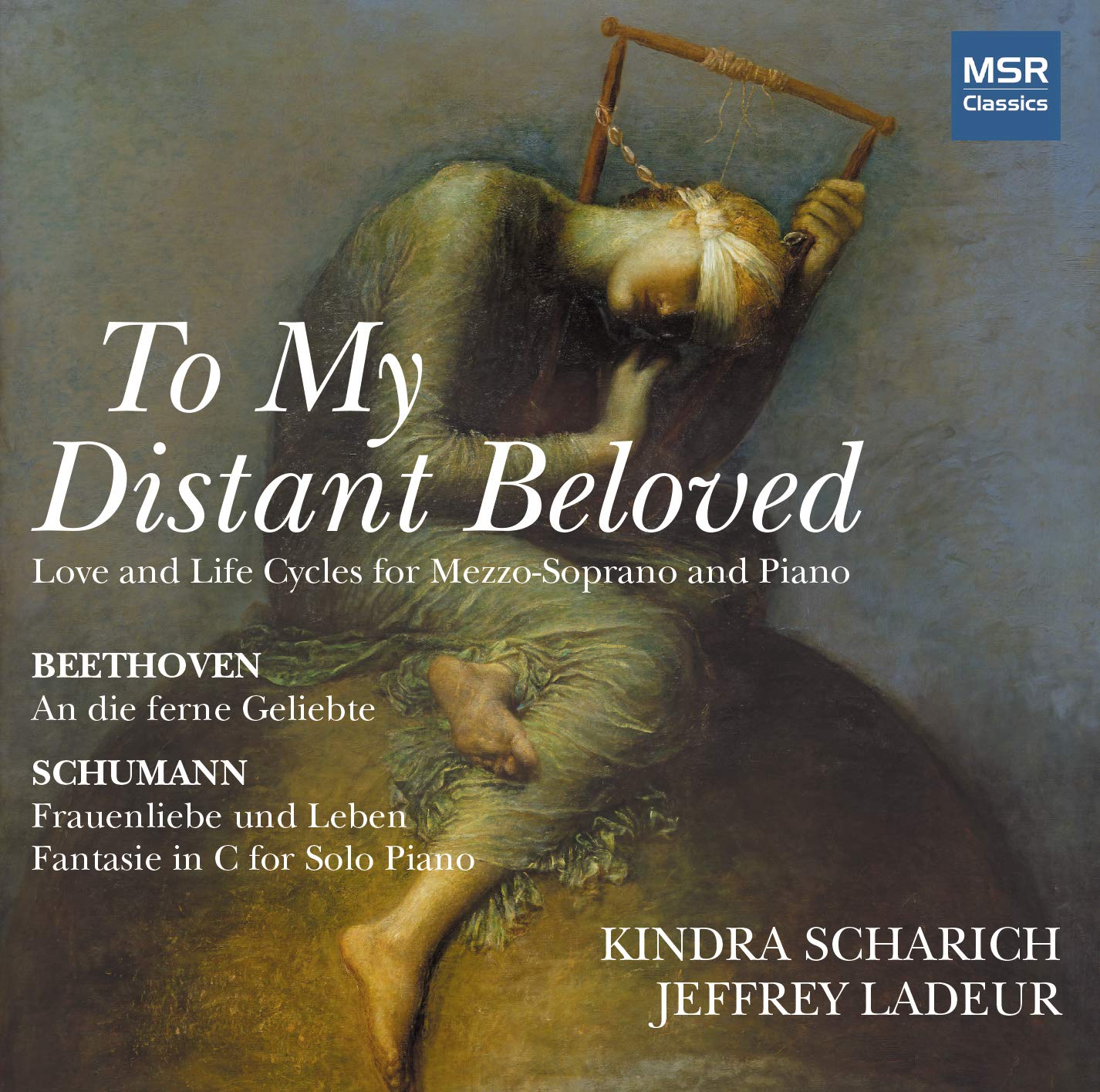 For those who love song, the act of singing, whether with one’s own voice or with one’s heart, is as natural—and as necessary—as breathing. To sing well, which is to sing in a manner via which melding music with text facilitates an avenue of communication that transcends notes and words, is an achievement that can be cultivated but never manufactured. To sing Art Songs well, to elevate the relationships linking music and words to their highest potential, natural gifts must be nurtured and refined, not for a season in practice rooms and lecture halls but throughout an artist’s performing life. For a conscientious champion of singing, an Art Song recital, no matter how accomplished, is always a momentary oasis, not a destination. Whether in new repertoire or new perceptions of much-travelled songs, the journey goes on, complete satisfaction always beyond the singer’s grasp.

Presented by MSR Classics in a warm, bright acoustic in which tones bloom as in a meticulously-engineered recital hall, mezzo-soprano Kindra Scharich’s and pianist Jeffrey LaDeur’s recording of music by Ludwig van Beethoven and Robert Schumann, To My Distant Beloved, is unmistakably a beginning. This is not to suggest that this is in any way a beginners’ disc. The artistry heard in these performances exhibits individual and collaborative maturity, but there are never pretensions of interpretive finality. Scharich and LaDeur approach the works on this disc with the cooperative spirit of chamber musicians, paradigms of leading and following discarded in a common pursuit of shared psychological engagement. The extraordinary talents of both performers are evident in every note of this music, but the fusion of their skills transforms this disc from a well-sung, well-played recital into a release of enduring significance in the history of recorded Art Song. These emphatically are well-sung, well-played performances. More remarkably, these are traversals of well-known music in which notes and words sound wholly new and conspicuously personal.

Beethoven was not as prolific in the genre as some of his contemporaries and successors, most notably Franz Schubert, yet he exerted indelible influence on the evolution of German Lieder, perhaps most notably by devising the through-composed ‘Liederkreis,’ a cycle of closely-related songs focused on various incarnations of a common psychological theme. Less celebrated by the broader musical community than his symphonies, sonatas, and string quartets, Beethoven’s songs are rightly prized by singers. His trailblazing Liederkreis An die ferne Geliebte was conceived during one of the most trying periods in Beethoven’s life. Unmarried, his career as a virtuoso pianist unraveling due to growing deafness, and battling his widowed sister-in-law for guardianship of her son, the composer coped with his struggles via music, his creative output diminished but never wholly disrupted by strife. A tormented quest for lasting love occupied Beethoven throughout much of his adult life and found in An die ferne Geliebte a sublime outlet that, as performed by Scharich and LaDeur, continues to powerfully promulgate the wrenching emotions of unfulfilled longing.

Partnered by LaDeur as though they were singing a duet, Scharich phrases the opening song of An die ferne Geliebte, ‘Auf dem Hügel sitz ich spähend,’ with the sort of eloquent simplicity expected of a violinist playing the slow movement of Beethoven’s Opus 61 Violin Concerto. In all of the songs on this disc, voice and piano articulate the music with sensitivity to the ways in which patterns of notes convey subtleties of the words. This is never more apparent than in ‘Wo die Berge so blau,’ which Scharich sings with disarming simplicity. Similarly, she and LaDeur delve deeply into the nuances of ‘Leichte Segler in den Höhen’ without inflating the song’s modest means of expression. The abiding sincerity of Scharich’s connection with Beethoven’s music and Alois Jeitteles’s words is keenly felt in her account of ‘Diese Wolken in den Höhen,’ her ideally-focused intonation paralleling her concentration on lucidly enunciating and interpreting the words. Their realization of the lines ‘Wenn alles, was liebet, der Frühling vereint, / Nur unserer Liebe kein Frühling erscheint’ in ‘Es kehret der Maien, es blühet die Au’ imparts an incredibly moving but understated sense of resignation, the narrator’s feelings of loneliness and sadness heightened by an awareness of inevitability. The directness with which Scharich sings ‘Nimm sie hin denn, diese Lieder’ illustrates a vital aspect of an insightful Lieder singer’s art, her own experiences unquestionably shaping her interpretation but imposing nothing on Beethoven’s music.

Whereas Beethoven was plagued during the composition of An die ferne Geliebte by the effects of deafness and worsening physical maladies, Schumann was less troubled in 1840, whilst writing his Opus 42 Frauenliebe und Leben, by the mental illness that so direly affected the final decade of his life. Utilizing texts by Adelbert von Chamisso that would elicit responses from a number of Nineteenth-Century composers, Schumann centered his Frauenliebe und Leben upon an omnipresent inexorability that is at once reminiscent of and quite different from that at the core of Beethoven’s An die ferne Geliebte. Embroiled in 1840 in litigation intended to free his beloved Clara Wieck from the obligation of receiving paternal blessing for marriage, Schumann surely found refuge from this stress in giving musical expression to von Chamisso’s depiction of a woman’s bond with her lover from its inception at their first meeting to its culmination with his death. Rather than the continuous musical progression of An die ferne Geliebte, Schumann’s cycle is comprised of eight self-contained Lieder, each intimating a leave-taking that ushers in the subsequent period in the relationship.

As in their performances of the Beethoven songs, their realization of the opening bars of Schumann’s ‘Seit ich ihn gesehen‘ distinguish Scharich and LaDeur as august interpreters of this music. The technical acumen of the pianist’s playing of An die ferne Geliebte is equaled by the mastery with which he plays Schumann, but the synergy of his rendering of the former gives way in the latter to an aloofness that limns the significance of the piano’s rôle as the voice of the narrator’s swain. In this vein, ‘Er, der Herrlichste von allen’ is an active dialogue between the woman and her wordless lover, the piano representing not her thoughts, as in An die ferne Geliebte, but the object of them. Scharich sustains conversational lightness in ‘Ich kann’s nicht fassen, nicht glauben’ and ‘Du Ring an meinem Finger,’ the voice utterly secure and stunningly beautiful throughout the range.

In this performance, the somberness that slowly permeates the latter half of Frauenliebe und Leben darkens the colors of Scharich’s vocalism without instigating interpretive heaviness. The earnestness of her voicing of ‘Helft mir, ihr Schwestern’ is augmented by the appealing freshness of the voice. Singer and pianist suffuse their performance of ‘Süßer Freund, du blickest’ with urgency, LaDeur exhibiting the emotive efficacy of fastidiously observing Schumann’s dynamic notations. Autumnal hues emerge in ‘An meinem Herzen, an meiner Brust,’ which Scharich and LaDeur present as a touching reminiscence of fleeting joys. There must have been pangs of irony for Schumann in ‘Nun hast du mir den ersten Schmerz getan,’ the obstacles to his union with Clara having caused him such pain. Cynics might be tempted to accentuate that irony, ending the cycle with bitterness and self-pity. Scharich and LaDeur choose reflection over regret, evoking Lord Tennyson’s postulation that it is better to endure the loss of one’s love than to never love.

To My Distant Beloved closes with an aptly atmospheric epilogue in the form of an engrossingly poetic performance of Schumann’s Opus 17 Fantasie in C major. Primarily composed in 1836 in homage to Beethoven and prefaced by a quote from Friedrich Schlegel that memorializes the music’s genesis, the Fantasie epitomizes the tumultuous Romanticism found in much of Schumann’s music, not least his Lieder. Marked ‘Durchaus fantastisch und leidenschaftlich vorzutragen; Im Legenden-Ton,’ the piece’s introduction requires particular rhythmic concentration if it is to seem rhapsodic without becoming chaotic. LaDeur maintains both flexibility and control, preferring subtlety to showmanship and managing the exposition in a manner that highlights the ingenuity of Schumann’s singular musical architecture. The arching lines of the central ‘Mäßig, Durchaus energisch’ section is sculpted with the finesse of a master’s handling of marble, each striation in the music’s textures elucidated but also hypnotically integrated into the cumulative sonority of the piece. LaDeur plays the ‘Langsam getragen; Durchweg leise zu halten’ segment with undeviating fidelity to Schumann’s instructions. The pianist’s technique meets each of the Fantasie’s many challenges with absolute assurance. His performance provides the disc not with a summation but with a musical ellipsis, a kind of entr’acte for the transition into the next phase of this wondrous odyssey.