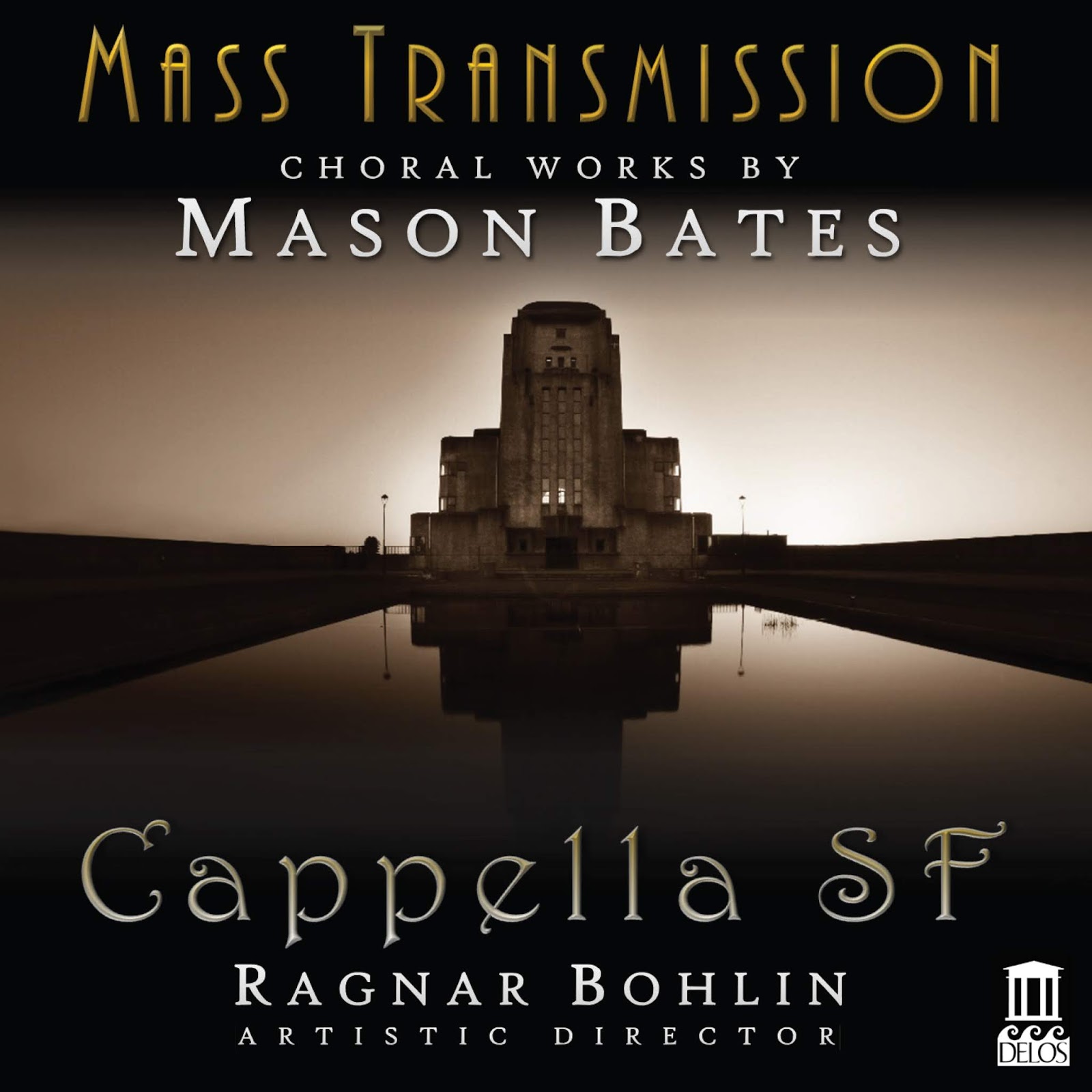 Whether the music being performed is a marvel of polyphony by a Renaissance master, a Bach Passion, a Händel oratorio, a crowd scene from an opera by Verdi or Wagner, or a Mahler symphony, choral singing wields a communicative power that no other mode of musical expression can duplicate. To hear a good performance of a motet by Josquin des Prez, the prisoners’ chorus in Act One of Beethoven’s Fidelio, or Hindemith’s When lilacs last in the dooryard bloom’d is to participate, even when listening to a recording, in a communal celebration of music’s capacity to transform sounds into emotional conduits that transcend ordinary modes of interpersonal connection.

Were their texts wordless, the choral works by American composer Mason Bates on the captivating Delos release Mass Transmission would impart engagingly provocative messages, but, like choral music itself, this tunesmith’s music divulges a notable gift for crafting music that not only conveys, complements, and heightens the meanings of words but also facilitates the listener’s comprehension of subtleties that read and spoken words can at best only partially disclose. So spiritually resonant are the pieces on Mass Transmission—and so eloquent are these performances of them—that it almost seems as though this is not music at all. Rather, Bates has made the essence of humanity audible.

Planning, polishing, and performing works in an array of genres have taken Bates from his native Richmond, Virginia, to many of the world’s most prestigious concert venues, where he has collaborated with celebrated artists and ensembles. His relationship with the Chicago Symphony has proved to be particularly fruitful, not least on disc, and the recording of the Santa Fe production his opera The (R)evolution of Steve Jobs—the most successful production of a new work in Santa Fe Opera’s history—garnered the 2019 GRAMMY® award for Best Opera Recording.

Also much in demand on the nightclub circuit as DJ Masonic, Bates has cultivated a rare and eclectic expertise in the mixing of sonic timbres and textures. This talent for creating musical mosaics that depict the magnificent simplicity of the complexities of life, represented by disparate aural components, permeates the works on Mass Transmission, as well as his Children of Adam, commissioned by the Richmond Symphony in celebration of the orchestra’s sixtieth anniversary and forthcoming on compact disc via a Reference Recordings release. The most daunting task faced by an insightful composer is surely that of giving life to relevant narratives with sounds that are at once original, challenging, and convincing. In the music on Mass Transmission, Bates accomplishes that task with grit and grace.

Completed in 2009, Sirens is performed here in the composer’s version for twelve-part a cappella chorus. A tremendously demanding meditation on the physical, psychological, and philosophical consequences of resistance and surrender to internal and external seductions, the piece is performed by Cappella SF with the kind of hypnotic immediacy that a choir merely singing for studio microphones cannot project. Artistic Director Ragnar Bohlin brings clear-sighted pragmatism to his conducting of this music, and the choir’s singing of the intertwining parts echoes the lucidity of his approach. It is unlikely that the San Francisco-based choristers have native speakers’ familiarity with the Greek text from Homer’s Odyssey that shapes the first segment of Sirens, but, guided by the cadences of the music, they enunciate the words as though their second home is an Athenian amphitheater.

One of the best-known literary incarnations of a cornerstone motif of German Romanticism, Heinrich Heine’s ‘Die Lorelei,’ becomes in Bates’s treatment an unsettlingly personal interlude, and the singing lures the listener into the mesmerizing intricacies of the vocal writing. The words of Pietro Arentino’s ‘Stelle, vostra mercè l’eccelse sfere’ drew from Bates’s imagination music of absorbing individuality, the inventiveness of which is appealingly accentuated by Bohlin and the singers. The text of ‘Sirinu nuqa rikunia’ is a beautiful passage in the indigenous language of the Quechua peoples of South America, a wrenchingly timely allusion in this season during which swaths of the Amazonian rain forest are burning. Quechua civilizations largely inhabited mountainous regions of their continent, but their words, evocatively set by Bates and exquisitely sung by Cappella SF, are an apt ambassador for South America’s environmental and cultural crises. ‘Jesus was walking beside the Sea of Galilee’ from the biblical Book of Matthew is similarly current, the evangelist’s imagery receiving from the composer’s music increased, sometimes astonishing modernity. The return of words from Homer’s Odyssey in the last of Sirens’ songs precipitates a cathartic surge of emotional growth and self-awareness. Hearing this music is not a passive undertaking: this is a performance that an attentive listener will feel.

The disc’s eponymous work, Mass Transmission, was commissioned by the San Francisco Symphony as a headlining work for the 2012 Mavericks Festival. Fascinatingly, its poignant texts were taken from sources as unlikely as a document published by the government of the Netherlands and the diary of a Dutch citizen residing in Indonesia. In its sequence of movements, Mass Transmission examines the ramifications of separation from the perspective of a mother and her daughter, the former in Holland and the latter a continent away on the island of Java. With his music, Bates elucidates every unexpected expressive nuance of the impersonal bureaucratic language in ‘The Dutch Telegraph Office.’ The tone of the writer’s words in ‘Java’ is sporadically reminiscent of the fragile but fiercely unflappable spirit that emerges from Anne Frank’s diary. ‘Wireless Connections’ is a modern motet of the sort that Claudio Monteverdi might have written were he living in an age of interminable profusions of words without substance or significance. Bates’s music is ever on the cusp of cacophony. In Mass Transmission, he takes sounds and words to the precipice of atonality, not as a means of forging a dull alloy of musical modernity but as a way of renewing the timeless oracle of choral music.

Vocally and interpretively, soprano Cara Gabrielson and mezzo-soprano Silvie Jensen partner their Cappella SF colleagues excellently, their artistry lending the words the honesty of genuine conversation. Though the musical idioms are very different, the playing of organist Isabelle Demers recalls Marie-Claire Alain’s performances of the music of her brother Jehan, who perished in the Second World War. Her commitment to the music is no less than the composer’s, who here provides the music’s electronica elements. Soloists, choristers, organist, composer, and conductor devote themselves to serving the words and the stories that they tell. These artists are no pantomime players: they are sensitive, sonorous surrogates in whose performances the sentiments that they express become their own.

The emotional potency of Mass Transmission is a testament to Bates’s genius in composing pieces that meaningfully realize the ‘e pluribus unum’ potential of choral music, uniting many individual voices in a single stream of sound, sometimes a deafening deluge and sometimes barely a trickle, that overcomes obstacles of difference and division. A critically important voice in the chorus of artists whose contributions fostered the success of Mass Transmission is that of recording engineer David v.R. Bowles.

A skilled engineer’s goal is to manufacture an aural atmosphere in which his work is imperceptible, eliminating the tangible and intangible distances that isolate listeners from performers. True to his reputation, Bowles achieves this spectacularly on Mass Transmission, but his work on this disc is not merely the science of turning dials and manipulating channels. His is the artistry of a creator, in addition to that of a craftsman, akin to the efforts of a master translator whose translations have their own literary merit. On this disc, Bowles’s expertise yields a recorded ambiance in which Bates’s music seems as organic a part of existence as birdsong, roaring thunder, and whispered words of love and comfort.

The ‘bonus’ inclusion of a wonderful performance of the three-and-a-half-minute jewel ‘Rag of Ragnar’ to conclude Mass Transmission begets a parable about this disc and the composer whose music it showcases. Drinking from the spring that nourished the great creators of choral music of the past, a composer might understandably hoard the refreshment gathered from those waters. He might collect and closely guard ideas with justifiable concern for the advancement of his career. There is no question that a composer’s reputation benefits from a recording of the quality of Mass Transmission, but this is not a disc that ostentatiously seeks to impress. Rather, Mass Transmission earnestly seeks to inspire. Mason Bates does not drink his fill from the fountain of inspiration and then turn away. With his music, he fills a chalice and invites every listener to savor the undiluted elixir of choral song.