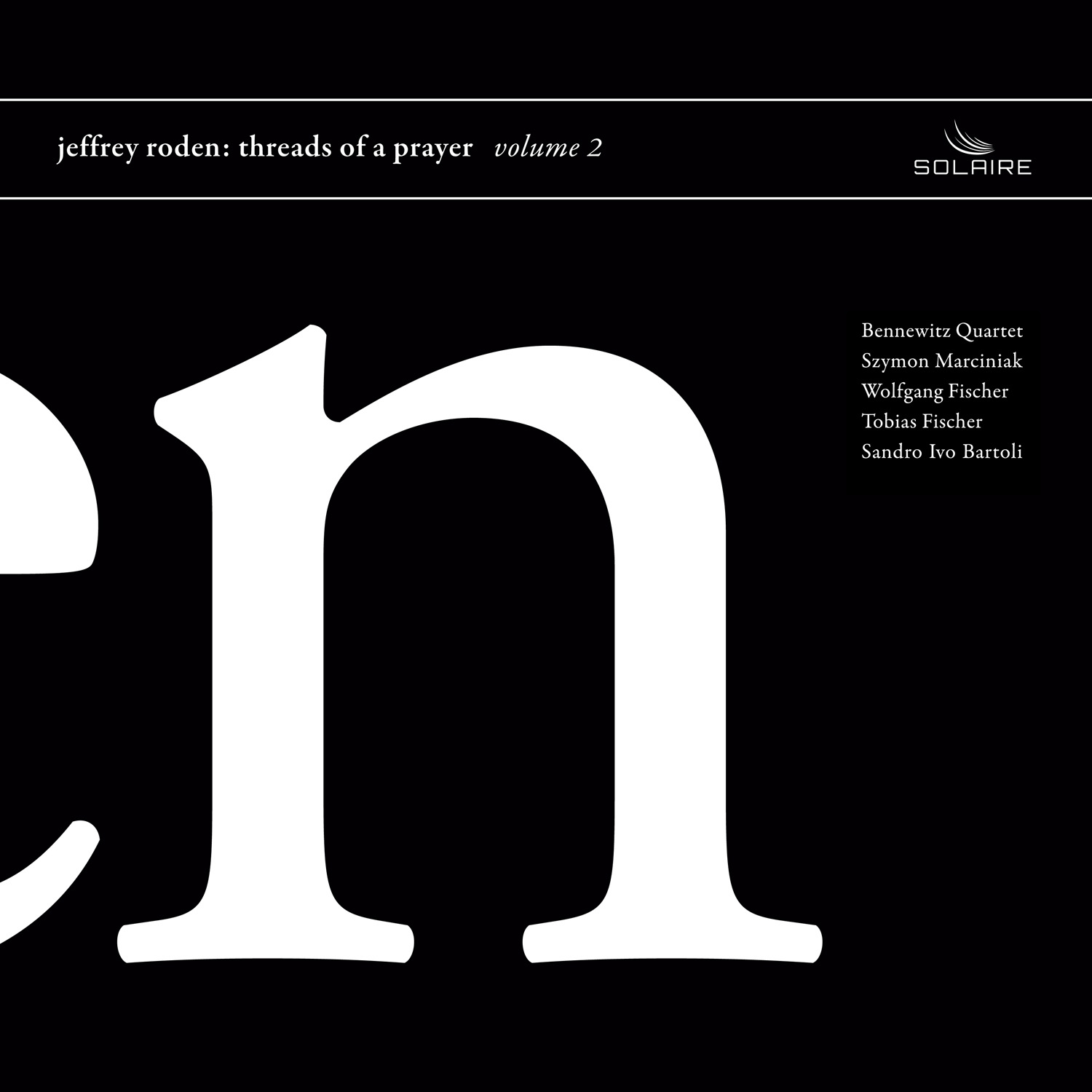 Who hears the prayers of those whose voices have been stifled? What deities are there to comfort those who have learned to seek peace in annihilation? Which are the Psalms to read over the corpses of those who never found love? Where are the places in which those who have no home can find rest? There are few things more injurious to the integrity of an artist’s work than seeking philosophical agendas in it, but there are artists whose endeavors transcend the traditional boundaries of the media in which they work. To experience the music of Jeffrey Roden solely with the ears would be akin to viewing the canvases of Frida Kahlo and perceiving only fantastical colors, hearing none of the voices that scream from her images and feeling none of the wounds that tear at the paint. Continuing the journey begun with the 2016 release of the breathtakingly original first volume [reviewed here], the second volume of Solaire Records’ threads of a prayer introduces another quartet of Roden’s works in performances that utilize sound as only one medium of their existence. This is music that must be lived, not merely heard, and the performances on this disc make passive listening impossible.

Describing the first work on the disc, the field, as a trio for violin, double bass, and timpani is to impose upon the music a measure of formality that its ethos unmistakably rejects. Produced, engineered, and edited by Solaire Records founder Dirk Fischer, the disc’s soundscape is itself a component of the field’s impact. Crawling out of primordial silence like the first sprout of a germinating seed, the music spreads its tentative rhythmic steps upon crumbling tonal ground, seeking the strength to stand and survey its surroundings. Included in Solaire’s typically engaging liner notes, Roden’s poem ‘the field’ proposes a literary translation of the field’s aural message.

Played by Jakub Fišer, first violin of the Bennewitz Quartet, double bassist Szymon Marciniak, and timpanist Wolfgang Fischer, the piece is poetry in its own right, the music uncannily paralleling the complexities of humanity in the manners in which the parts coexist, sometimes seeming to shun interaction and then coveting their collisions as invigorating, life-affirming connections. Rarely are the double bass and timpani as communicative as Roden, Marciniak, and Fischer make them, and there is sweetness in Fišer’s tones even when stridency is the composer’s mandate. Applying the imagery of Roden’s words to the music, beauty materializes as an inalienable element of the ‘great suffering,’ particularly when beauty is prized above all other conditions. As performed here, the field is a musical parable that warns of the quiet destruction that lurks behind the masks that beauty wears.

Scored for violin, double bass, and organ, as we rise up recalls Baroque trio sonatas in concept if not in content. Here, too, Roden’s part writing casts the instruments as participants in an unscripted drama, emphasizing the significance of both their individual voices and their contributions to the ensemble. If the field is a cautionary parable steeped in apprehensive sadness, as we rise up is the reactionary explosion of impotent anger that groans, ‘I told you so!’ As in the field, there is unnerving beauty within the strands of the music, however: in this piece, it is the random, horrible beauty of chaos. One of the most extraordinary facet’s of Roden’s artistry is his ability to find the music in cataclysm and share it with listeners without dictating a desired response. Any composer can write tragic music, but only a complete artist can discern and transpose into sounds within the capacities of instruments the raw music of tragedy. Fišer’s Bennewitz Quartet colleague Štěpán Ježek phrases the violin lines with dexterity and imagination, and Marciniak matches his flawless intonation. As played by Tobias Fischer, the electric organ is not unlike the chamber organs frequently employed in Baroque music, its sonorities in as we rise up serving as a freely-deployed ground bass in the mode of Buxtehude and Pachelbel. The violence in the music disturbs more deeply for being enacted with such concentrated expressivity. Played so hypnotically, as we rise up is wondrously distressing. Is this truly external music, or is Roden ingeniously echoing the music of discontent that roars in each listener’s mind?

A noteworthy interpreter of music in a mind-boggling variety of idioms, Italian pianist Sandro Ivo Bartoli has fashioned an estimable career on his own terms, extracting from the instruments that he plays their own unique personalities rather than suppressing them with an artificial persona of his devising. His ambitions are driven by the demands of the music that he plays, not by the dictates of commercialism or meaningless celebrity. His technique is remarkable, the clarity of his articulations of even the most complex passages reminiscent of Rudolf Firkušný’s playing of music by Chopin or Martinů, but it is not the action of his fingers and wrists that marks Bartoli’s performance of Roden’s threads of a prayer as the work of a great artist. Under his touch, the warm-toned Steinway that he plays is transformed by Roden’s music from an instrument of wood, iron, and steel into a creature of flesh and blood, one whose voice utters the threads of its prayer with urgency.

The symbiosis between music and musician in Bartoli’s account of the first of Roden’s 6 pieces for the unknown for piano is stunning. In sequence, the six pieces constitute a tone poem that examines variations on the theme of unspoken feelings. The pianist’s playing of the second piece shimmers with subdued yearning, expanded in the third piece into a grandiose but subtle discourse between the musics of sound and silence. A lauded exponent of Franz Liszt’s piano music, Bartoli performs the fourth of the 6 pieces no less dazzlingly. The interpretive virtuosity required by Roden’s music is vastly different from the nimbleness necessitated by Liszt’s extroverted exhibitionism, but Bartoli’s emotive adroitness equals the marvels of his fingering. Like the final movements of a Baroque suite, the fifth and sixth pieces further develop the thematic material of the foregoing pieces, but there is no resolution in Roden’s music. Perhaps the unknown aspect referenced in the 6 pieces’s title is the absence of temporal definitions: this is not music that can be measured in seconds or minutes, with pauses for polite applause. Roden writes and Bartoli in this performance plays in Faulknerian stream-of-consciousness style, the music flowing with the naturalness of thought. Roden’s creative energy dwells in the unknowable, but what is known is that this is momentous music, fittingly performed.

When pressing ‘Play’ in order to hear a recording of music by Jeffrey Roden for the first time, the only certainty is that the sounds that emerge will be incomparably original, provocative, and utterly unfeigned. Hearing this second volume of threads of a prayer brings to mind history’s chronicle of the afternoon of 19 November 1863, when Abraham Lincoln managed to more eloquently convey the feelings of a nation battered by war in fewer than three hundred words than a celebrated orator had done in two hours. As performed on this disc, Roden’s music does with modest means what Frida Kahlo could do with a single painted blossom. Spurning the elitism that now oppresses the composition, performance, recording, and hearing of Classical Music, this is music of the people, by the people, and for the people—people willing to listen with both their ears and their souls.