If history portrays him truthfully, the life of Sir Walter Raleigh was worthy of the operatic stage. A favorite at the court of Elizabeth I, he was imprisoned along with his bride for having married without obtaining Her Majesty's consent, and still-debated participation in a plot to dethrone the Queen's less-virginal successor, James I, combined with the omnipresent necessity of placating the Spanish, cost him his head. Like many of the legendary dandies of history, much of the lore of Sir Walter Raleigh is likely apocryphal, but the fact that he inspired his own mythology attests to his significance in Elizabethan society. The city that bears his name has in North Carolina Opera a musical institution that appropriately honors and perpetuates the spirits of adventure, exploration, and discovery that drove Raleigh to glory. Under the guidance of General Director Eric Mitchko and Artistic and Music Director Timothy Myers, North Carolina Opera has in recent seasons, with world-class—indeed, often better-than-world-class—performances including Dvořák's Rusalka with Joyce El-Khoury, Act Two of Wagner's Tristan und Isolde with Jay Hunter Morris and Heidi Melton, and Verdi's La traviata with Jacqueline Echols, emerged as an enterprising force in the effort to keep opera vibrant and an energizing leader among America's regional opera companies. With an ambitious trajectory featuring three of the genre's most beloved scores, North Carolina Opera's 2015 – 2016 Season is destined to brilliantly honor the colorful legacy of the state's charismatic founding father.

Opening the Season proper in October 2015 after a triumphant Gala is a production of Giacomo Puccini's adaptation of John Luther Long's tragic tale of misguided love, shallow betrayal, and devastating sacrifice, Madama Butterfly. The daunting title rôle will be sung by resplendent soprano Talise Trevigne, whose comfort in Pip's challenging tessitura and affinity for effortlessly and unerringly projecting tones at the top of the range in Jake Heggie's Moby-Dick promise haunting beauty in Cio-Cio San's entrance music and the celebrated aria 'Un bel dì, vedremo.' Her Pinkerton will be dashing tenor Michael Brandenburg, and the compassionate American consul Sharpless will be portrayed by thrilling bass-baritone Michael Sumuel. The denizens of Nagasaki will be represented by mezzo-soprano Lindsay Ammann’s Suzuki, tenor Ian McEuen’s Goro, and bass Wei Wu. Performances of this picturesque, profoundly emotive production are scheduled for 30 October and 1 November in Memorial Auditorium.

On 24 January 2016, Myers will mount the podium in Meymandi Concert Hall to lead the company's concert performance of Pyotr Ilyich Tchaikovsky's stirring Yevgeny Onegin, which will be sung in its original Russian. Returning to Raleigh, where she enchanted the capacity audience with her exquisite performance of the title rôle in Rusalka, beautiful soprano Joyce El-Khoury will portray the deeply-conflicted Tatyana. The title rôle will be sung by baritone Joo Won Kang, whose depiction of Giorgio Germont in NC Opera’s February 2015 production of La traviata was a rare instance of legitimate Verdi baritone singing. Another NC Opera veteran, tenor Eric Barry, will deploy the same silvery tone that touched hearts as Rodolfo in January 2014’s La bohème as Tchaikovsky’s and Pushkin’s idealistic poet Lensky. A trio of wonderful mezzo-sopranos—Zanda Švēde, Thomasville native Victoria Livengood, and Robynne Redmon—bring leading lady voices to Olga, Filippveyna, and Madame Larina. This performance of Tchaikovsky’s expressive masterwork, infrequently performed by America’s regional opera companies, is certain to be one of 2016’s most fulfilling musical events in the South.

The survival of opera in the Twenty-First Century depends upon the efforts of companies like North Carolina Opera at expanding the audience into new communities and demographics. With performances of three of the genre’s most iconic scores featuring better-than-the-big-companies casts under the baton of one of America’s most gifted conductors, North Carolina Opera’s 2015 – 2016 Season has elements to captivate steadfast aficionados and convert first-time listeners into lifelong opera lovers. 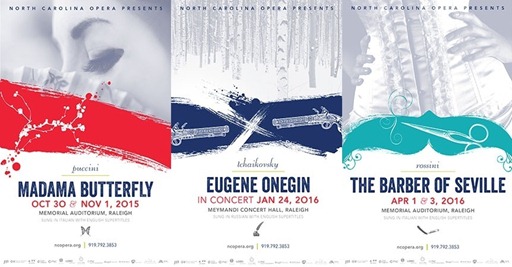 All casting is subject to change without notice. Graphics © by North Carolina Opera; all rights reserved.