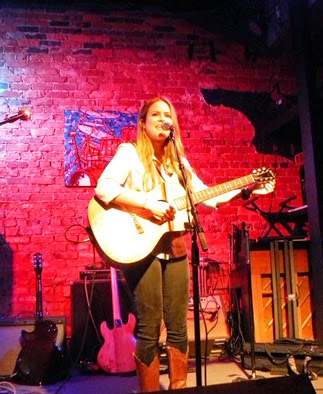 Musing at the Evening Muse: Natalie Noone in performance in Charlotte, NC, 24 July 2014 [Photo by June Newsome; used with permission]

One of the most exhilarating experiences in the Arts is witnessing the birth of a legitimate star. Whatever the genre, there is a collective thrill of discovery that every observer perceives as uniquely individual. Such is the pride in having encountered an engaging artist in his or her creative infancy that invariably far more people than the venues could accommodate claim to have seen Elvis Presley’s sole appearance at the Grand Ole Opry, Maria Callas’s début at the Metropolitan Opera, and Dame Margot Fonteyn’s first performance with the Royal Ballet. These were the sort of stars who shone both from the stages upon which they plied their trades and in the hearts of those who saw and never forgot them. Sadly, so many of today’s prominent performers embody an artificial stardom that is manufactured rather than earned. The public clamor for them because they are told that they ought to do, and they do as they are told until new instructions are given. Defying the machinations of popularity in the Twenty-First Century makes the already-difficult life of an artist even more crushing, but that defiance is what defines a star with the potential to be remembered when the notoriety-mongers push the next acid-voiced ingénue onto the stage. Defying the confining easy paths to success as an artist is what makes Natalie Noone a singer with a bright future, but it is raw talent that gives her the aura of an emerging star.

Raised in California and now resident in Nashville, Ms. Noone enjoyed in her chronological and artistic youths the example of her father, Peter Noone, front man of British Invasion hit-makers Herman’s Hermits. One of the few pretty-boy lead singers of any era in popular music to take care both to learn to sing properly and to master the business components of the Arts, Mr. Noone continues, now a half-century after he conquered global pop charts, to sell out venues large and small 150 days out of the year. This success is partially owed to the nostalgia movement in music but is substantially the product of Mr. Noone’s uncommon showmanship and wide-ranging savvy. Observing her self-effacing amiability and ease before an audience, it is apparent that Ms. Noone has both inherited and absorbed elements of her father’s artistic personality. She is unmistakably her own woman as a singer and musician, however, and her eclectic style is refreshingly free of obvious emulation. Though reminiscent of the young Dolly Parton, Joni Mitchell, and even the legendary chanteuses of her mother’s native France, Ms. Noone’s personal idiom is a fusion of American roots music and sophisticated threads of European music. Hers is not as much a traditional ‘Nashville’ or ‘Blues’ sound as an appealing synthesis of aspects of a wide array of styles and genres that she skillfully allies to the nuances of lyrics. A gifted guitarist whose playing far exceeds the level of many strum-as-they-sing musicians’ accomplishments, she is unafraid of sparse textures that highlight her abilities as a vocal storyteller. Many of her self-penned songs explore dark-hued emotions, but there is an insurmountable sunniness in her vocal delivery that mitigates melancholy. Above all, Ms. Noone radiates the unrelenting joy of singing that should be the life source for every musical star.

At her gig at the Evening Muse in Charlotte on Thursday evening, Ms. Noone offered the enthusiastic audience a selection of songs from her forthcoming studio album Midnight. An unaffected, playful presence on stage, she has a natural affinity for capturing the essence of a song and communicating it to the audience without gimmickry. The title track from Midnight is a beautiful ballad extolling the many shades of blue that cover an artist’s canvas and a lover’s heart, and the sheer loveliness of Ms. Noone’s timbre was wonderful. Written by Danny Flowers, the acclaimed session guitarist and songwriter who also produced Midnight, ‘Actions Speak Softer Than Words’ is a harmonically adventurous number that drew from Ms. Noone singing of special radiance. Her songs ‘What We Already Know’ and ‘Hold Me Down,’ both evocative pieces, were performed with muted intensity, the clarity of the singer’s diction uniting with her secure placement of vowels through register shifts. In her concluding song, ‘Loveliest Heartache,’ Ms. Noone built her vocals upon a Lila Downs-like core of silk-draped steel as the refrain’s melody ascended, but the dulcet pianissimo of her voicing of the last chorus brought her set to an unforgettably ruminant close. Rewarded by the audience with a reception of warmth equal to that which her singing exuded, Ms. Noone introduced herself to Charlotte with grace and unpretentious glamour.

Whichever musical genres young artists inhabit, far too many of them are devoured by the insatiable jaws of the behemoth that is the music industry in the new millennium. Success is measured in downloads and impersonal interactions, and deep pockets are often more critical to a fledgling career than deep wells of talent. Natalie Noone is the rare kind of musician who seeks affirmation in smiles and handshakes from those who hear her. Hers are the songs of a lover of singing, and hers is a path to stardom not of arena concerts and endorsement contracts but of the truest spirit of music. In short, she dares to be an artist among artifices.

To learn more about Natalie Noone, her forthcoming studio album Midnight, and upcoming performance dates, visit the Official Website for Natalie Noone and the Maybes.