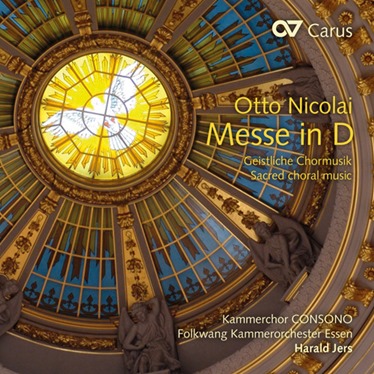 To many music lovers, even those who are exceptionally well informed, the name Otto Nicolai brings to mind only an assemblage of rollicking ladies with certain Shakespearean associations and the organization of concerts dedicated to Beethoven’s Symphonies that were the de facto first performances of the fledgling Wiener Philharmoniker.  Thankfully, the enterprising people who manage the cpo label recorded an Oper Chemnitz production of Il templario, a delightfully Italianate adaptation of Sir Walter Scott’s Ivanhoe that offers enjoyable proof that Nicolai’s talents extended beyond Die lustigen Weiber von Windsor.  Like Mozart and Mendelssohn, Nicolai was a child prodigy who was destined to have a short life, and though he is far less celebrated in the 21st Century than either of his fellow Wunderkinder his gifts for composition were widely acknowledged during his lifetime.  It may be surprising to those who know Nicolai only as the composer of a popular comic opera to consider that he was offered the position of Kapellmeister to the Berliner Dom in 1844, the post having been vacated by Mendelssohn’s return to Leipzig.  Unfortunately, few accounts of Nicolai’s personality and spirituality survive, so it cannot be ascertained with any degree of legitimacy whether opportunity, religious fervor, or fortuitous combinations of those factors prompted the young composer to supplement his operatic endeavors with expertly-crafted liturgical music.  Nicolai’s large-scale Messe in D was recorded three decades ago by Norddeutscher Rundfunk: a fine effort, the Koch Schwann CD release of the performance is now out of print.  The time was therefore right for a new recording of the Messe, and it is rewarding to make the acquaintance of the fascinating smaller-scaled choral pieces that fill out Nicolai’s body of liturgical work.  On the whole, this recording by Carus-Verlag is perhaps the most compelling account of Nicolai’s extra-operatic achievements yet recorded.

The Psalm settings recorded here reflect the influence of Mendelssohn, Nicolai allying melodic inspiration with an elegant shaping of the Psalmist’s texts that harkens back to Baroque models, many of which were being rediscovered during Nicolai’s lifetime.  Following the example of Mendelssohn’s setting of Psalm 55, containing the famously exultant ‘O for the wings of a dove,’ Nicolai’s settings of Psalms 13, 84, and—in fragmentary form—54 are lovely, mostly strophic pieces that enable clear delivery of the texts.  Psalm 13—‘Herr, wie lange willst’ or ‘How long wilt thou forget me, o Lord?’—is a simple but intensely beautiful piece for soloists, choir, and piano, and it receives on this recording a performance that conveys its emotional directness.  In addition to kinship with similar music by Mendelssohn, there are echoes in Nicolai’s setting of Psalm 13 of the Beethoven of the Cantata on the Death of Emperor Joseph II (WoO 87), Mass in C (Opus 86), and Christus am Ölberge (Opus 85) and even the Händel of the Chandos and Coronation Anthems.  The recorded fragment of Nicolai’s setting of Psalm 54, ‘Ecce enim Deus adiuvat me’ (‘Behold, God is mine helper’), reveals an exquisite homage to Renaissance polyphony, the part writing recalling the music of Allegri (similar lines, beginning with ‘Ecce enim',’ occur in Psalm 51, set in Allegri’s famed ‘Miserere mei’) and Gabrieli.  The highly chromatic harmonic patterns frequently employ the dominant seventh on the cadence and subsequent resolution to the tonic familiar from many masterworks of Renaissance choral music, and—in the spirit of the [likely inauthentic] ascents to top C in Allegri’s ‘Miserere mei’—the descant takes the sopranos to the very tops of their ranges.  Psalm 84—‘Wie lieblich sind deine Wohnungen’ or ‘How amiable are Thy tabernacles, o Lord of Hosts!’—is scored for soloists, choir, trumpet, trombone, and organ.  Musically, this piece is a fascinating hybrid: the ensemble passages for the soloists might come from Mendelssohn’s Elias or Paulus, but the music for choir and instruments evokes the unique worlds of Bach’s Passions and the music of Praetorius.  The five brief movements of the second Deutsche Liturgie, their combined duration only extending to slightly more than five minutes, both draw on Renaissance models and subtly nod in their understated sincerity towards Brahms’s Ein deutsches Requiem.  Nicolai’s setting of the ‘Pater noster’ is also rooted in the polyphonic music of the Italian Renaissance, the harmonies reminiscent of the motets of Palestrina.  It is a testament to the excellent preparation and consummate musicality of the Kammerchor CONSONO singers that they so successfully sing in all of the styles adapted by Nicolai in these pieces, the blend of voices always carefully but unobtrusively managed.  The sorely-tested sopranos are particularly impressive, taking their exposed top lines with the bright sound of boy sopranos but the breath control and certain intonation of adult singers.

Conducted by Harald Jers, an esteemed choral scholar and prominent participant in the musical life of Essen, the players of the Folkwang Kammerorchester Essen accompany the soloists and choir with complete dedication.  Nicolai’s orchestrations in the Messe are mostly typical of the composer’s work, founded upon an expansive understanding of the principles of Viennese Classicism.  Strings, woodwinds, and brass instruments dominate, with many small points of orchestration and harmonic development that bring the Masses of Mozart to mind.  String figurations that alternate with brass passages, especially in the minor-key development, shape the ‘Kyrie’ with accents of Mozart’s Requiem.  Deployment of horns and timpani give the ‘Gloria’ a martial air, and the hushed choral statements of ‘In terra pax’ combine with the soloists’ lines to suggest uneasiness that is ultimately quieted by a return of the primary theme.  The ‘Credo’ is supported by enthusiastic music for the strings in the vein of similar passages in the Masses of Schubert.  The ‘Sanctus,’ also somewhat martial in tone, quickly gives way to a brief but effective fugue on ‘Osanna in excelsis.’  The particularly lovely ‘Benedictus’ begins with effective writing for horns, to which the plaintive sounds of a solo violin—reminiscent of the corresponding section in Beethoven’s Missa solemnis—are added before strings, brass, and timpani launch a restatement of the ‘Osanna in excelsis’ fugue.  The ‘Agnus Dei’ begins with the most original music in the Messe, an attractive melody for the clarinet over a dark-hued string accompaniment that conjures the atmosphere of the first bars of Bach’s Matthäus-Passion.  Unlike many settings, Nicolai’s music for the ‘Dona nobis pacem’ is muted rather than celebratory, sounding as a result like a genuine and very heartfelt prayer for peace.

The quartet of soloists includes soprano Sarah Schnier, contralto Alexandra Thomas, tenor Wolfgang Klose, and bass Lucas Singer.  Ms. Schnier possesses a light but obviously well-schooled voice, her security in the high tessitura of her music little troubled by a slight edginess to the sound.  Ms. Thomas also possesses a voice of quality, which shimmers with lovely colorations in her lower register.  Mr. Klose’s singing discloses a slender tenor voice with a pretty timbre, the kind of sound that seems tailor-made for singing the Evangelists in Bach’s Passions.  Mr. Singer, seemingly more baritone than bass, displays expert musicality, his singing in the ‘Agnus dei’ especially refined and lovingly-phrased.  All four singers are winningly attentive in ensemble passages, their voices combining very naturally.

In many ways, this is a surprising and enlightening disc.  Though his Messe in D is not revealed to be a masterpiece of startling individuality, it is a tuneful, expressive piece that adds considerably to an understanding of its composer.  All of the pieces on this recording suggest that Nicolai was a sensitive and sophisticated composer whose knowledge of liturgical music was comprehensive.  Obviously influenced by his contemporaries and his most gifted musical ancestors from both north and south of the Alps, Nicolai absorbed the finest qualities of many styles, ultimately synthesizing an approach to choral writing that produced music of distinguished eloquence.  All of the Psalm settings, the ‘Pater noster,’ and the Deutsche Liturgie are pensive, musically evocative miniatures, and the Messe in D is a work that, like Franz von Suppé’s Requiem, is overshadowed by its composer’s operatic success but emphatically deserves to be heard.  Above all, this disc inspires a quixotic wish that all recordings of little-known music could be so convincing.