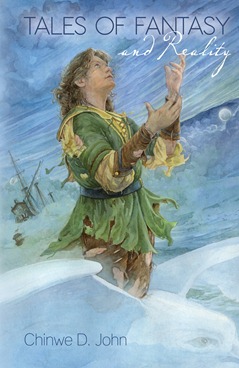 One of the greatest debacles facing readers today is the matter of distinguishing legitimate literature from the work of the present generation of pretenders in print.  While it is perhaps inaccurate and prejudiced to suggest that there are fewer works of literary merit being newly published now than in years past, it cannot be denied that a good book receives less attention in 2012 than it might have garnered in years before readers’ attention spans were shaped by chat shows and text messages.  There can be little debate that, in Tales of Fantasy and Reality (published in July with illustrations by James Browne and available on Amazon), Chinwe D. John has provided modern readers with an engaging, exhilarating work of literature that challenges, beguiles, and impresses with tales delivered by a skilled and unique mistress of contemporary storytelling.

A child of the world whose formative years were divided among four continents, the author brings to Tales of Fantasy and Reality deep understanding of diverse cultures and traditions, and one of the most fascinating aspects of the book is the way in which she brings 21st Century sensibilities to tales originating in ages-old lore.  Especially enlightening are her explorations of the folktales of Africa, a rich vein of complex, compelling mythology far too little tapped by Western writers, especially those writing in English.  The author is not afraid of addressing the macabre, but the humor and poetry with which she does so are refreshing: these are stories that are meant to provoke self-study and enjoyment, not shock and dissociation.  Like the plays of Shakespeare, Chinwe John’s poems and stories reveal the surprising extent to which all peoples, past and present, are related by common emotions, struggles, and successes.

Linguistically, Tales of Fantasy and Reality displays an eloquent command of the English language, allied with a gift for nuance born of the kind of raw insightfulness that only comes from exposure to varied cultures.  The rhythmic construction of the author’s poetic verses contains great power, manipulating the reader’s streams of consciousness and conscience by focusing attention and sympathies on themes that often turn preconceptions on their heads.  The author’s appreciation of music is apparent in the almost operatic way in which she uses language to bend phrases away from the conclusions that the reader expects, and this renders her stories—whether told in poetry or prose—vibrant and delightfully chameleonic: read the same story multiple times, and its layers of meaning shimmer and change under the light of differing moods.  This is an accomplishment achieved only by uncommonly gifted writers.

In this age of e-mails and sound bites, it is rare that even a very good author can create a work of literature that interests and intrigues from the first page to the last.  This talented writer succeeds in spinning tales that confront and cajole, drawing the reader into worlds that are mysterious but comfortingly familiar.  Reading Tales of Fantasy and Reality is like spending an evening with a dear friend, sharing remarkable stories of lives lived and imagined over the finest cognac.  Chinwe John is an author whose maiden literary voyage is one of both triumph and promise; one which is sure to mark the beginning of a circumnavigation of the world of our Century’s true literature.

To learn more about Chinwe John’s work, and to enjoy video recordings of her recitations, accompanied by Classical guitar, please click here to visit her site.
© by Joseph Newsome