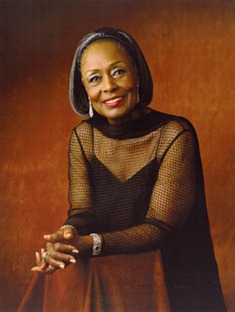 Again, so soon, another of the greatest voices in recent memory has been silenced by the passing on 5 November of American mezzo-soprano Shirley Verrett, one of those brilliant but humble artists whose career both redefined and obliterated boundaries.  Moving with resilience between mezzo-soprano and soprano roles, she was both a celebrated Carmen and the definitive Lady Macbeth (in Verdi’s Macbeth) of her generation.

A child of the American South, Ms. Verrett was among the ranks of pioneering African-American artists—an impressive assemblage of singers that included Martina Arroyo, Grace Bumbry, Mattiwilda Dobbs, Reri Grist, Leontyne Price, and George Shirley—who followed the example of Marian Anderson by both thrilling audiences and changing perceptions in recital and concert halls and in opera houses.  When Ms. Verrett made her Metropolitan Opera début as Bizet’s Carmen on 21 September 1968—a week to the day before the MET début of Plácido Domingo, with whom she would memorably sing Saint-Saëns’s Samson et Dalila for the Company more than twenty years later—she had already participated in the first Live from Lincoln Center and Young People’s Concerts broadcasts.

The racism that Ms. Verrett faced in her native land proved no match for the grace and wit of her personality and the abiding sincerity of her artistry.  She was content to allow the natural beauty of her voice and the uncompromising dignity of her carriage convey the activism that the adversity that she faced inspired.

During her first season at the MET, Ms. Verrett’s assignments included Eboli in Verdi’s Don Carlo, a role that she made her own and on which she left an indelible impact through several ‘live’ performances preserved on records and a critically-acclaimed studio recording.  In the 1973 – 74 season, one of the defining moments of her MET career came when, owing to Christa Ludwig’s indisposition, Ms. Verrett sang not only Didon (her scheduled role) but also Cassandre in Berlioz’s Les Troyens under the baton of Rafael Kubelík.  Ms. Verrett’s Didon had been heard four years earlier in a Roman concert performance conducted by Georges Prêtre and recorded for broadcast by RAI.  Along with her Eboli and her eloquent Carmen for RAI, superbly partnered by Albert Lance’s idiomatic Don José, the RAI Didon remains as a fittingly monumental legacy of Ms. Verrett’s career.

In a career at the MET that encompassed successes in such roles as Judith in Bartók’s Bluebeard’s Castle and Madame Lidoine in Poulenc’s Dialogues des Carmélites, Ms. Verrett also sang Neocle in the production of Rossini’s L’Assedio di Corinto in which her friend Beverly Sills made her long-awaited MET début and is perhaps the only singer in the history of the Company to have sung both Adalgisa and the title role in Bellini’s Norma on the MET stage.  She was also widely, if not unanimously, praised for her MET performances of Tosca, in a production directed by Tito Gobbi.  Appreciation was near universal for Ms. Verrett’s portrayal of Azucena in Verdi’s Il Trovatore, of which William Bender wrote in Time in 1976, ‘One would hate to see a woman as lovely as Verrett consigned forever to play a hag like Azucena, but hers is one of the memorable interpretations of the role, both visually and vocally.’

Throughout the world, Ms. Verrett was celebrated for the beauty and strength of her voice and for the intensity of her performances.  It was for the beauty and strength of her spirit that she was loved by audiences and colleagues, however.  Fine recordings, both studio-made and ‘pirated,’ are testaments to the work of an exceptional artist: a long, happy marriage and a loving family are testaments to the life of an exceptional woman.  It was as Azucena that Shirley Verrett bade farewell to the MET twenty years ago, on 2 May 1990, and it is with a joyous gratitude tinged with sadness that Verdi conveyed so well in his music that she will be remembered. 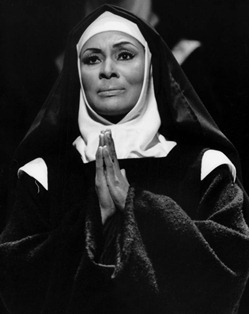