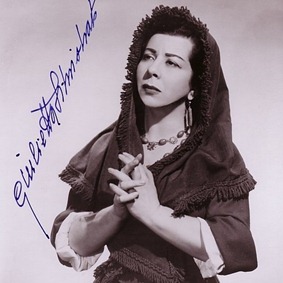 The life and work of the remarkable Italian mezzo-soprano Giulietta Simionato, who passed away in Rome a week before she would have marked her 100th birthday, are too familiar to require detailed recounting.  She was, especially during the last two decades of her nearly-forty-year career, the reigning Italian dramatic mezzo-soprano in all of the world’s principal opera houses, her performances as Azucena (in which role she débuted at the Metropolitan Opera, opposite Carlo Bergonzi, Antonietta Stella, and Leonard Warren) and Amneris remaining unsurpassed standards more than forty-four years after her retirement in 1966.  She was also a pioneer in singing Rossini’s Rosina in the original mezzo-soprano keys in an age in which the role had been appropriated by coloratura sopranos and in singing La Cenerentola, which aside from the famous Glyndebourne production with Spanish mezzo-soprano Marina de Gabarain was ignored until another Spaniard, Teresa Berganza, espoused the opera in the 1970’s.

From a purely personal perspective, Giulietta Simionato was an exceptional artist, which is to say that she was an artist of exceptions.  In my view, the role of Santuzza in Pietro Mascagni’s Cavalleria rusticana requires a dramatic soprano – except for Giulietta Simionato, whose voice was of such richness and expansive security in the upper register that it could easily encompass the merely technical aspects of the role while tearing into the dramatic flesh of the opera with special intensity.  Good as the work of many international singers has been in the role, Bizet’s Carmen possesses a quintessentially French insouciance that is best enacted by French singers – except for Giulietta Simionato, whose Carmen seduces with sultry arrogance and an alluring integrity even when sung in Italian.  Valentine in Giacomo Meyerbeer’s Les Huguenots, first sung by the much-discussed French soprano Cornélie Falcon, demands a powerful singer of the elusive Fach named for its creator – except for Giulietta Simionato, whose performances (albeit sung in Italian) of the role in the famous 1962 La Scala production with Dame Joan Sutherland and Franco Corelli, audibly from the timbre of the voice the work of a mezzo-soprano, shone like meteors even in a very starry firmament.  [Maria Callas, who was perhaps closer than any other singer active in 1962 to being a true Falcon, entered into negotiations with La Scala to sing Valentine in the Huguenots production, but nothing came of it.  Could even La Divina have sung the role more magnificently than Simionato?]

It was opposite Maria Callas, at La Scala in 1957, that Giulietta Simionato enjoyed one of her greatest triumphs, as Giovanna Seymour to Callas’ Anna Bolena.  In interviews conducted after her retirement, she often cited her performances as Giovanna Seymour in 1957 as the pinnacle of her career, and hearing any of the available recordings of the 14 April performance reveals at once the work of an incomparable singer at her breathtaking best.  The La Scala production of Anna Bolena was also a milestone in Callas’ career, and hearing the two singers dueling with their voices in the great duet for Anna and Giovanna – the incredible anger and betrayal of Callas’ Anna as she accuses Simionato’s Giovanna of being the rival for whom Enrico has spurned and condemned her and the horrified guilt and sorrow of Simionato’s Giovanna, a woman who knows that she is soon to be Queen, still riveting after so many years – is to hear the interaction between two artists for whom the music was a genuine conversation, not between a Queen and her would-be usurper but between two women, both of them ambitious but desperately frightened, who loved the same man.  It is not the art that conceals art or, as Leoncavallo put it, art that is a slice of life: it simply is life that, for those moments in the hands of great artists, happens to take place in song.

There is no more charming recording of Giulietta Simionato than her account with baritone Ettore Bastianini of ‘Anything You Can Do’ from Irving Berlin’s Annie Get Your Gun, part of the gala sequence in Herbert von Karajan’s DECCA recording of Johann Strauss’ Die Fledermaus.  Making her entrance with a sepulchral ‘Reverenza’ (a reference to her success as Mistress Quickly in Verdi’s Falstaff), this is a singer who is not afraid to poke fun at herself.  Her interactions with Bastianini in exaggeratedly-accented English are delicious: the jewel is surely when she responds to Bastianini’s assertion that he ‘can live on bread and cheese’ with the deadpan line, complete with absurdly-trilled r, ‘so can a rrrrrrat!’  It is cute, it is genuinely hilarious – above all, it is the essence of Giulietta Simionato.

As a modest collector of operatic memorabilia, principally photographs of singers whose work I admire, one of my most cherished possessions is a rare photograph (reproduced below), taken on the stage of La Scala in 1963, showing Giulietta Simionato as Santuzza on her knees at the feet of Franco Corelli as Turiddu, their expressions so passionate and yet so natural.  This description might apply with equal validity to Simionato’s artistry: as passionate as the fiery core of the earth and as natural as breathing. 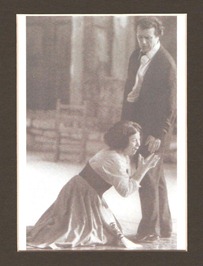