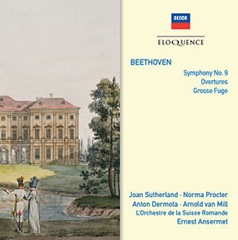 For a piece of such fame and wide-ranging appeal, it is bizarre to note how problematic Beethoven’s iconic Ninth Symphony has proved to be on records.  Seemingly, even conductors for whom the Symphony was a reliably successful concert piece were tempted to unleash distracting and damaging idiosyncrasies in recording studios.  Perhaps it is merely that a listener is carried along in the concert hall by the grandeur of the music, quibbles about the conductor’s approach to this or that passage being swept aside by the overall experience.  The Symphony’s discography is extensive, however, and any listener is virtually assured of finding a recorded performance – or, more likely for true connoisseurs, a group of performances, taken as a whole – that provides satisfaction.

In most instances, it is therefore of dubious interest except to the most obsessive completists when a particular performance of the Symphony is recovered from whatever graveyard there is for recordings, dusted off, and reissued.  Heard with cumulative exposure to nearly eight decades of recorded history, any performance from the archives, as it were, faces comparison with legendary recordings conducted by the greatest baton-wielding luminaries of the twentieth century: Toscanini, Furtwängler, Klemperer, Böhm, Karajan, Solti – an exceptional array of talent ranging from the avant garde late Romanticism inherited from Mahler to post-Impressionist modernism.  That the Symphony not only survives the varied styles of most of these musicians but thrives in some of them is indicative of the true quality of the score, one that in nearly two centuries of being trotted out for every occasion requiring festive music on a suitably grand scale teeters on the brink of imposed banality.  The Ninth may not be Beethoven’s finest symphony, nor indeed truly deserving of the prominent place it holds in the international concert repertory and in the hearts of even casual music-lovers, but it is an important work that manages to be more than a clichéd paean to humanity.

A vital element in a conductor’s successful mastery of the Ninth Symphony, especially on records, is the possession of an understanding that wrong-headed choices in the first three movements are not mitigated by strong work in the universally familiar final movement.  Towering as the final movement is, the Symphony is emphatically a symbiotic whole in which failures in any of the four movements vitiates the impact of the complete piece.  A key to the success of this performance by the Orchestre de la Suisse Romande, which admittedly has never been altogether absent from the shelves but is now granted a new lease on life in a fresh-sounding remastering from Australian DECCA’s Eloquence series, is that Ernest Ansermet displays an inherent comprehension of the fact that the Symphony is a score to be conducted with care and attention to detail from first note to last, without overinflating any of the movements beyond its natural place in the complex structure of the work.

In terms of interpretation and realization of his musical goals, Maestro Ansermet was very fortunate in recording his cycle of Beethoven Symphonies with the Orchestre de la Suisse Romande, an ensemble founded by Maestro Ansermet in 1918 and shaped by his artistic ideals during the forty-nine years of his tenure as the Orchestra’s director.  The unity of approach throughout the Ninth Symphony’s four movements is impressive, with no single movement being given greater emphasis.  The sonorities produced by the Orchestra are unique: from the very first note, the listener is keenly aware that this performance is not coming from Vienna or Berlin.  String and woodwind tones are thinner than in the famous German-speaking orchestras, and there is greater focus on producing a blended sound that encourages an anonymity of individual instruments except in solo passages.  This approach is similar but not identical to the way in which Maestro Ansermet conducted his remarkable recorded performances of modern French and Francophile repertory (de Falla, Ravel, Stravinsky, and the like).  There is a small concession to Viennese tradition, but the style remains very much Maestro Ansermet’s.  Despite sounding very different from most German orchestras and the imitative American and British ensembles that play the Symphony, the Orchestre de la Suisse Romande play very well, facing every challenge with musical integrity that reveals to the listener that emotional engagement with the score is far more meaningful than virtuosity for its own sake.

Some critics have suggested during the past two decades that Maestro Ansermet’s conducting of Beethoven was ahead of its time in the sense that his work resembles that of the later breed of ‘historically-informed’ conductors who seek to restore nineteenth-century practices to modern performances of Beethoven’s music.  The inspiration for these observations is evident in the first movement [Allego ma non troppo, un poco maestoso].  There is a consistent drive for clarity among instrumental textures, with tempi gauged to generate momentum without sacrificing precision and rhythmic buoyancy.  Unlike many latter-day conductors who have justified similar approaches by citing scholars’ opinions, Maestro Ansermet undoubtedly drew his insights from the score.  Rather than consciously striving to pioneer a restoratively ‘informed’ performance philosophy, Maestro Ansermet was conducting as he felt that the music itself dictated.

The second movement, the complicated Scherzo [Molto vivace – Presto], likewise benefits from Maestro Ansermet’s efforts at preserving clarity and bounce.  This is a restrained performance that impresses with its poise, completely avoiding the sometimes exhilarating but more often tiresome sense of barely-averted catastrophe in many go-for-broke performances of the movement.  This performance reminds the listener that the Scherzo truly (for lack of a better word) swings.  This is music played as exciting, tuneful music and not as a string of tones that are primarily symbolic.

The lyrical third movement [Adagio molto e cantabile] finds Maestro Ansermet and his Orchestra at their best, the tempi faster than are often heard and the playing luminous.  Here, too, clarity is at the core of the performance.  Octaves from the strings in the course of the variations reveal minor infelicities of intonation, but the playing of the solo horn is eloquent.  Refusing to exploit the sentimentality of this movement, Maestro Ansermet exhibits an awareness of the notion that despair is not necessarily the impetus of the profundity of Beethoven’s slow movements.  Here, the movement is presented as contemplative rather than despondent, touching the heart as surely with its simplicity as other performances do with dolefulness.

It must be granted that Maestro Ansermet has at his disposal in the final movement an unlikely but uncommonly euphonious quartet of soloists: Dame Joan Sutherland (in her first of many recordings for DECCA), Norma Procter, Anton Dermota, and Arnold van Mill.  Both ladies sing with the beauty and security of tone familiar to listeners who know their contemporaneous work in Händel.  One knows instinctively that with Ms. Sutherland there is no need to fear the high lines of the soprano solos.  Mr. van Mill launches his recitative with obvious relish and rounded tone.  In the course of his contribution, a few instances of questionable German diction undermine the strength of his performance, but it is a strong piece of singing.  The eternally youthful Mr. Dermota is somewhat light of voice for his assignment (and perhaps seems more so when compared with the many performances in which erstwhile Heldentenors struggle with the music) but is steady and ardent.  The female choristers are given an especially hard task, the long-held top A’s revealing weaknesses among the sopranos.  On balance, though, the singing is capable and pleasing; indeed, rather more than that in the work of the solo quartet, who are among the finest on records.

Instrumentally, there are misfires in the final movement, some of which result from Maestro Ansermet’s pacing.  A listener might easily be forgiven when hearing the blatancy of the brass fanfares that launch the movement for imagining that he sees Silver and his ubiquitous rider silhouetted by the rising sun in some high Alpine pass.  As in the preceding three movements, conductor and players make considerable efforts to avoid lapsing into the saccharine murk of facile passion, but there are moments in the final movement in which a more expansive approach would be welcome.  Tempi remain well-judged, but there is a sense of the constant preservation of clarity being at odds with the committed singing of the choristers.  None of the small points of inconsistency throw the performance off course, but the total impact of the final movement is very slightly lessened.  After three unconventional but delightfully challenging movements, the performance of the fourth movement emerges as something of an anticlimax.  It is nonetheless a vibrantly imaginative and rousing performance.

With the boon of an orchestra of his own creation, Ernest Ansermet enriched DECCA’s legacy not only with groundbreaking recordings of ‘new’ repertory but also with a series of Beethoven’s Symphonies that remains competitive because of the conductor’s uncomplicated but poetic manner.  This performance of the Ninth Symphony crowned the superb achievement of that series, and it is impossible to believe when listening to the DECCA Eloquence release that the recording is now fifty years old.  Maestro Ansermet inspired his players and singers to give a performance for the studio microphones that is redolent of the concert hall, quirks marginalized by the persuasive power of the music.  Heart and genuine respect for Beethoven’s coveted score prove more inspiring than oversized musical gestures and Viennese sophistication for conductor, players, and listener. 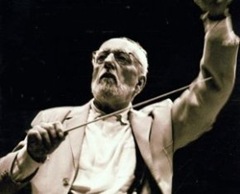