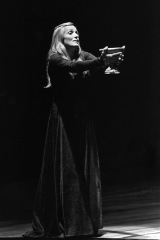 As even her most frenzied admirers accepted in the final years of the 1970’s that Birgit Nilsson’s dominance in the Hochdramatische repertory – especially Strauss’ Elektra and Färberin and Wagner’s Brünnhilde and Isolde – was drawing to its natural close, both opera lovers and the managers of the world’s opera houses searched the ranks of young singers for a suitable successor to Nilsson in German dramatic repertory.  The protean vocal abilities of Nilsson seemed, and indeed have proved to be, not merely once-in-a-generation but once-in-a-century.  Nonetheless, musical voices as significant as Elektra’s and Brünnhilde’s could not fall silent upon Nilsson’s retirement.  During the last two decades of the twentieth century, there surely were respectable, idiomatic performances of German dramatic operas throughout the world, but among the heroines of those performances the undoubted mistress of the Hochdramatische repertory was Hildegard Behrens, who passed away unexpectedly in Tokyo on 18 August.

Born on 9 February 1937 in the town of Varel in Lower Saxony, Behrens pursued a career in jurisprudence before devoting herself to singing.  Initially studying voice in Freiburg, Behrens made her formal operatic debut there in 1971 as the Contessa in Mozart’s Le Nozze di Figaro, inauspiciously launching an important career in dramatic roles with success in Mozart.  Following further acclaimed performances in Freiburg, Behrens was invited to join the Deutsche Oper am Rhein in Düsseldorf, where she gradually progressed to larger, more dramatic roles, culminating with Marie in Alban Berg’s Wozzeck, a role with which she remains associated.

It was while rehearsing Wozzeck in Düsseldorf that Behrens first encountered the Austrian conductor Herbert von Karajan, the galvanizing force behind the developments and destructions of several noteworthy operatic careers.  Impressed by Behrens’ Marie, Karajan invited her to Berlin to audition for the 1977 Salzburg Festival production of Strauss’ Salome.  Rewarded with the title role, Behrens enjoyed a triumph at Salzburg and took her success into the recording studio.  Behrens’ Salome on EMI, with Karajan stalwarts José van Dam and Agnes Baltsa as Jochanaan and Herodias, remains after more than thirty years one of the finest entries in the opera’s competitive discography.

In the meantime, Behrens made her formal debut at New York’s Metropolitan Opera on 15 October 1976 as Giorgetta in Puccini’s Il Tabarro, part of a complete performance of Il Trittico in which Neil Shicoff also made his MET debut (as Rinuccio in Gianni Schicchi).  [Behrens had first appeared at the MET two weeks earlier, on 1 October, in a ‘MET Marathon’ gala concert in which she sang Elisabeth’s ‘Dich teure Halle’ from Tannhäuser.]  A further 169 performances followed during the next two decades, ranging from Mozart’s Elettra and Donna Anna and Beethoven’s Leonore, through Santuzza and Tosca, to Brünnhilde in all three of her guises, Isolde, and Berg’s Marie.  It was as Marie that Behrens bade farewell to the MET a decade ago, on 24 April 1999.

Despite myriad successes in Wagner and Strauss roles throughout the world, not least in Munich and Vienna, it is likely as the centerpiece of Otto Schenk’s legendary MET Ring Cycle – on stage, on records, and on video/DVD – that Behrens will be most  remembered, at least in Wagner repertory.  Though it might seem cruel to suggest that a singer’s interpretation of a role was largely unchanging throughout her career, in Behrens’ case this is indicative of the fact that she had thoroughly prepared the role (or, in the case of Brünnhilde, the three roles) prior to offering her interpretation to the public.  In Die Walküre, Behrens’ Brünnhilde 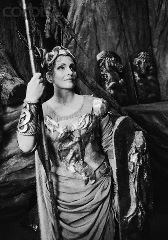 bounded onto the stage in the second act, the very vocal and dramatic embodiment of the young, impetuous favorite daughter of a god.  Few Brünnhildes have been more magisterial without being matronly in the Todesverkündigung, and few have expressed the girl’s heartbreak at being cast off by her father more pathetically or with greater sincerity.  In Siegfried, it is virtually impossible to name a Brünnhilde, remembering even Florence Easton, who awakened to love with greater wonder and tonal beauty.  Enduring what she perceives as shattering betrayal and sacrificing herself to union in death with her consort, Behrens’ Brünnhilde became in Götterdämmerung both the archetype and that thing she represents: the Eternal Feminine who offers herself as an instrument of redemption.  Both Nilsson and Varnay sang the three Brünnhildes with greater vocal abandon (and, to be frank, more voice), but Behrens meaningfully personified the post-modern Brünnhilde, first and always a sensitive, emotionally intense woman.

Fortunately for posterity, Behrens was recorded in most of her finest roles: Agathe in Weber’s Der Freischütz (DECCA; Kubelík), Leonore in Beethoven’s Fidelio (DECCA; Solti), Strauss’ Elektra (Philips; Ozawa, and Naïve; Layer) and Salome (EMI; Karajan), Wagner’s Isolde (Philips; Bernstein) and Brünnhilde (all three roles – DGG; Levine, and EMI; Sawallisch), and Berg’s Marie (DGG; Claudio Abbado).  It is my personal opinion, however, that no recording captures the essence of Behrens as a performer more thrillingly than Sir Georg Solti’s studio recording of Strauss’ Die Frau ohne Schatten, in which Behrens sings the fascinatingly complicated role of the Färberin.  In this performance, Behrens’ Färberin progresses with rare eloquence and psychological directness from the petulant shrew of her first appearance to the woman who understands herself and accepts her role as the divinely-blessed procreator in the final scene.  Behrens conjures many moments of brilliant, richly touching singing, the voice responding with complete commitment to the intricacies of her interpretation and the upper register gleaming and free.  A vital component to an audience’s reaction to the Färberin is that, for all her faults, we must respect her, strive to understand her motivations, pity her, and ultimately embrace her (the role was based to an extent on Strauss’ wife Pauline, after all).  Even in the impersonal environment of the recording studio, Behrens creates a multi-dimensional character who exasperates and intoxicates but inspires genuine affection.  Such was the nature of Behrens’ artistry.

The position that Hildegard Behrens will occupy in the line of great Hochdramatische singers is a matter for debate.  What is more certain is that Behrens was for a generation of opera lovers the definitive Brünnhilde.  For me, Behrens was my first Brünnhilde, the intriguing impetus who inspired me to explore the earlier Brünnhildes of Flagstad, Traubel, Varnay, Mödl, Nilsson, and Dame Gwyneth Jones.  It is not merely sentimentality that secures for Behrens a prominent place in my affections.  Even when singing with a voice less imposing than those of many of her finest older rivals, Behrens possessed the endearing ability to aim her performances squarely at the collective hearts of her audiences, and she rarely missed her mark.  In our digital age, legacies are increasingly insignificant, but it is comforting and exciting to imagine that another magnificent voice now rings through Walhalla. 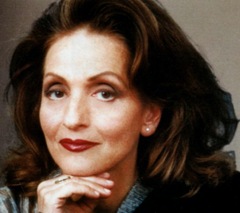