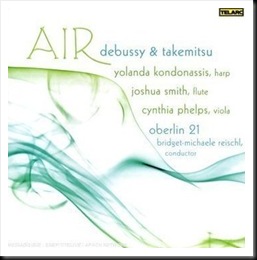 Even before coming to the music in this fascinating recital, it is wonderful to note that a portion of the proceeds from the sales of this disc are donated to global environmental causes, contributing to the conservation of the landscapes and natural resources so meaningfully evoked in the music recorded here.  The artists and TELARC are to be commended for this act of solidarity, recognizing that neither Music nor Nature thrives without the inspiration and intervention of the other.

In a broad sense, Impressionistic depictions of nature and the elements of nature in humanity are at the heart of this recital.  The dual serenity and crushing force of the sea are never far from the surface in Debussy’s music, and the Takemitsu pieces on this disc were chosen carefully in order to maximize continuity of focus.  Though the influence of the Frenchman on the Japanese composer is keenly felt, the musical idioms are not redundant: the Debussy pieces inhabit an early-twentieth-century world of modernist but still-luxurious harmonies while the Takemitsu works are starker, the tonal structures largely centered on diatonic matrices.

Oklahoma-born harpist Yolanda Kondonassis plays superbly throughout, especially in her fleet performances of Debussy’s Danses sacrée et profane, in which she is capably backed by Oberlin 21, an ensemble of some of the Conservatory’s finest string players under the direction of Bridget-Michaele Reischl.  One of the foremost harpists of her generation, Ms. Kondonassis brings wide-ranging experience in all reaches of the harp repertory to this performance, displaying a keen sense of preserving the innate structures even of music of great rhythmic complexity.  In the music of both Debussy and Takemitsu, Ms. Kondonassis takes care to bring lyricism to the fore, exploring with a virtuoso’s ease the exquisite melodic threads that bind these works.  Furthermore, Ms. Kondonassis proves a chamber musician of great sensitivity, responding with instinctive grace to her collaborators’ playing.

Cynthia Phelps, principal violist of the New York Philharmonic, likewise displays considerable gifts for the intimate interaction of chamber music, seeming both to sense the touch of the harpist’s fingers and to breathe with the flautist.  Especially in the Debussy Sonata and Takemitsu’s And then I knew ‘twas Wind, Ms. Phelps plays with liquid tone that calls to mind the Emily Dickinson poem from which Takemitsu drew his title: ‘Like Rain it sounded till it curved / And then I knew ‘twas Wind.’  It is always an immense pleasure to hear a fine violist in music not composed by Telemann or Berlioz, and Ms. Phelps’ performances on this disc not only grant that pleasure in great quantities but also confirm that she is among the finest violists of our time.

Equally responsive in his solo and ensemble pieces is Joshua Smith, principal flautist of the Cleveland Orchestra.  Seamus Heaney wrote of the flute that ‘its sound releases something naturally untamed, as if a squirrel were let loose in a church.’  There is a sense of this in Mr. Smith’s playing of his solo pieces on this disc, an element of spying through music on nature at its most rhapsodically and gorgeously disarrayed.  The immediately arresting aspect of Mr. Smith’s playing is the uncommonly expansive scope of his phrasing, every note given full value but equally integrated into the broader progressions of the music.  In the title track and Debussy’s Syrinx, Mr. Smith plays with beauty of tone that, without undermining the inventiveness of the music, focuses the listener’s attention on the intricately-wrought textures of the pieces.  The metaphysics of music are tested and vindicated in Mr. Smith’s playing, which reveals as compellingly as possible that designations of French or Japanese, Impressionistic or post-Modern, tonal or atonal are inherently and triumphantly insignificant.

Born on opposite sides of the planet, Debussy and Takemitsu displayed in their music a shared understanding not only that water is a common denominator to both life and livelihood but also that music is an organic extract from nature.  The human voice is a bestial din, just as the flute’s voice is a fettered wind.  Music is a manipulation of nature’s sensory elements, and this disc presents that timeless contrivance at its most intriguing.  With playing of a quality that belies the difficulties of the music, the performances in this recital celebrate the musicality of simply being alive.  It is sad that this is missing from so many performances and recordings.

[Click here to purchase this disc from Concord Music Group, the American distributor for TELARC discs.']