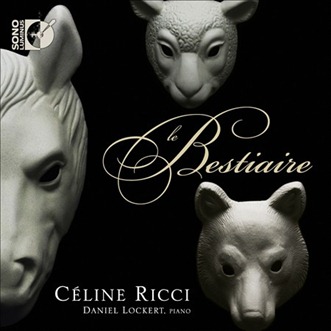 It is alleged that the great artist Michelangelo once said, ‘I saw the angel in the marble and carved until I set him free.’  Likely apocryphal, the statement might justifiably also be applied to the endeavors of Lieder singers, whose task it is to reveal the jeweled hearts of words and music.  It is true that some composers make the task easier than others, but even in the most straightforward song repertory a disconcertingly high proportion of singers fail to penetrate the surfaces of the songs that they sing, especially on recordings.  It is evident when listening to this disc that soprano Céline Ricci’s voice is a chisel of rare precision, as in the space of two or three minutes she can reveal the sparkle of mélodies.

In an age of limited attention spans, programmatic albums can be dangerous territory, even for quite accomplished artists.  Threads of artistic, emotional, or philosophical continuity threaten to distract the casual listener.  A wonderful quality of Le Bestiaire is that one need not listen intellectually to enjoy the disc, so to speak: unlike many recital discs that seek to pursue a common theme, Le Bestiaire is musically engaging even if one ignores the examination of the relationships among animals and men presented through the music.  It should be stated that this is not the sort of music that seeks to amuse with mimicry of animal noises.  Where this disc treads, and where Ms. Ricci’s artistic curiosity guides the listener, is into the most elemental interactions between animals and humanity.  Central to the journey taken on this recital is the reminder that humans, too, are animals; a reminder that all creatures are participants in a shared Nature.

The music on this disc, though unified in theme, is wonderfully varied, and it is a testament to his skills as a pianist that—in both accompaniment and his solo pieces—Daniel Lockert succeeds in offering playing that is uniformly excellent and supports Ms. Ricci’s musical journey from start to finish.  Mr. Lockert’s playing places him among the ranks of pianists such as Gerald Moore and Erik Werba, artists whose poetic accompaniment of Lieder recitals revealed the collaboration between sensitive singers and pianists in song repertory to be an intimate interaction akin to that shared by instrumentalists in chamber music.

The disc opens with Henri Sauguet’s settings from ‘Les animaux et leurs hommes,’ an intriguing series of poems by Paul Éluard, unfortunately known to most English-speaking readers only as the first husband of the exotic Gala Dalí.  Éluard’s lines, like those of many of his French-speaking contemporaries, are deceptively simple, conveying multiple layers of meaning in the simplest language as perhaps is more possible in French than in any other Western language.  Sauguet’s music, too, is rich in half-perceived meanings and insinuations.  Ms. Ricci touches every subtle dramatic point in these songs without lingering over any of them, giving every sentiment its due without exaggerating anything.

Perhaps the most interesting selections on the disc are those from Renée de Brimont’s ‘Le Bestiaire du Paradis,’ set by Jeanne Herscher-Clément, who is remembered primarily for her associations with Darius Milhaud (Herscher-Clément accompanied Milhaud at the piano when he premiered Charles Koechlin’s Viola Sonata in 1915) and the Ballets Russes.  Herscher-Clément’s songs are mostly light in tone, but she shared Sauguet’s ability to hint at hidden things through subtle harmonic shifts and rhythmic variations.  These, too, are mastered by Ms. Ricci, whose chameleonic vocalism adapts as readily to these petits trésors as to the arias of Händel that she also regularly sings.

Musically, the centerpiece of the disc is de Séverac’s setting of ‘Les hiboux’ from Baudelaire’s Fleurs du mal, a beautiful, picturesque piece that captures the strange power of Baudelaire’s poem.  Ms. Ricci brings precisely the right timbre to the ominous final stanza, shrouding the piece in mystery and elusive humor.

Ms. Ricci’s timbre is bright, even metallic when appropriate to the text that she is singing, and she is unafraid of taking the voice to its limits in order to remind the listener that, domesticated or not, the beasts of this recital are not quaint barnyard residents of children’s stories.  These creatures have their dramas, their comedies and tragedies after the manner of their human neighbors, but Le Bestiaire does not attempt to offer a pseudo-operatic Animal Farm.  Through careful shading of tone and pointed delivery of text, Ms. Ricci reveals the playfulness and pathos of this music, short-changing nothing but never stretching any of the songs beyond its scope.  Ms. Ricci also succeeds in reminding listeners for whom the music in this recital is uncharted territory that obscurity can be a result of inattention rather than a symptom of dubious quality.

The perils of putting a programmatic recital disc before the public are conquered delightfully in Le Bestiaire.  The talents of Ms. Ricci and Mr. Lockert unite in a performance that meaningfully explores a complicated thematic link between the worlds of animals and men, but this is accomplished without sentimentality or saccharine impositions upon the music.  For the casual listener, this is a delightful recital of engaging music, masterfully performed.  For those willing to spare an hour for deeper thought, this is a recital that enriches one’s appreciation of humanity.  Whatever the context of the exploration, is this not the most basic aim of art?

[Note: The author provided English translations for a few of the French texts of the songs performed in this recital, and these translations appear in the liner notes that accompany the disc.  Heartfelt thanks are offered to Céline Ricci for the opportunity to participate, even in this small way, in this wonderful project.]